The potential for exports of U.S. natural gas is not as rosy as proponents once imagined, said two panelists at this week’s New Energy Finance 2015 conference. 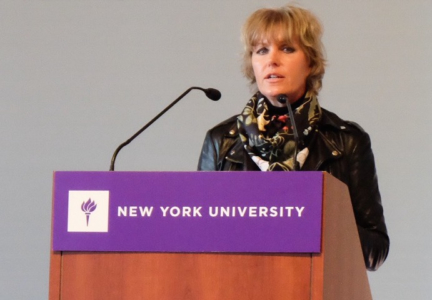 Deborah Lawrence: “There’s been probably considerable money borrowed on shales that either was borrowed based on assets that don’t exist or will never be commercially viable to extract.”

Here’s Charlie Blanchard of Bloomberg New Energy Finance: “We don’t think that Pennsylvania gas makes it to Miami, much less Tokyo. There’s really only enough of it to supply the eastern U.S. There’s not so much of it that we can export it everywhere.”

Deborah Lawrence of Energy Policy Forum painted a more dire picture, asserting that shale exports are “dead in the water” and that U.S. shale production will peak between 2018 and 2020.

She added that reserves of U.S. shale gas have been “vastly overestimated” in regulatory submissions because of an SEC rule that enabled companies to expand their definition of the term in hopes of borrowing more money.

Lawrence: “What we know is that there’s been probably considerable money borrowed on shales that either was borrowed based on assets that don’t exist or will never be commercially viable to extract.”

Lawrence added that the solar industry, by contrast, is on the rise. She presented data showing how solar has created more new jobs than oil and gas combined in the past three years and that solar stocks have been outperforming oil and gas stocks. Because of renewables, she said, “I’m actually one of the most optimistic people out there on the energy markets, because I think we are truly on the cusp of a new energy paradigm. I think there are dynamics occurring that are going to create an environment for probably the greatest wealth creation you or I will ever see.”

The four-day conference, which convened on the campus of New York University and was sponsored by IEEFA and the Institute for Policy Integrity at NYU’s School of Law, ended Thursday afternoon.

HOW GRASSROOTS OPPOSITION CREATED FINANCIAL RISKS FOR THE TAR-SAND INDUSTRY

Activists who work to promote the acceleration of the new energy economy are most effective when they ally with finance professionals.

That was the takeaway from a panel exploring the impact of one public campaign in particular, against tar-sands development in Alberta – and against associated pipelines like the Keystone XL.

Kenny Bruno, senior adviser to the New Venture Fund, explained how the fund commissioned an honest financial analysis of the project with the overarching goal not just of stopping it but of keeping oil in the ground.

Bruno: “A fairly serious financial analysis was at the root of the campaign. We wanted to protect the climate, protect First Nations rights, stop the toxic tailings ponds from growing even further, and how do we do that? By reducing the profitability and reducing expansion, and Keystone was the keystone.”

He said that stronger ties between activists and Wall Street analysts at the outset would have been even more productive.

Hannah McKinnon, senior campaigner for Oil Change International, noted the impact of a joint report by Oil Change and IEEFA that took up the question “Have protests changed anything when it comes to tar sands?”

The resulting report “A Constellation of Risks: How Public Accountability Is Slowing Tar Sands Development,” produced a shocking number, concluding that public opposition had cost the tar-sands industry $17 billion between 2010 and 2013.

In response to a request from an Alabama activist for advice on how to stop proposed oil drilling in that state, Art Steritt, executive director of Coastal First Nations International, said his group had made it a priority to personalize the message. “Those people on the ground in their testimony about what effect it’s going to have on their lives is the most powerful thing you can do,” he said.

Of course much of the industry is loath to accept the inevitable.

Abbie Dillen, who leads legal advocacy for Earthjustice, described how fossil-fuel executives and their political allies target environmental groups by looking for potentially embarrassing or controversial statements in emails. She said advocacy groups in some cases have had to divulge all of their correspondence with the EPA, for instance.

Dillen: “The idea that it’s this improper or unusual thing for interested stakeholders to work with an agency on effective regulation, when it’s all industry does, is ironic.”

Nachy Kanfer, a deputy director for the Sierra Club’s Beyond Coal campaign, was reminded of how a campaign by Senator David Vitter, chairman of the Environment and Public Works Subcommittee on Transportation and Infrastructure, worked to publicize communications between the EPA and the National Resources Defense Council.

“It affects the economics of doing it,” Schlissel said.

Jim Flood is an IEEFA contributor.