Coal Producers: Another Year Older and Deeper in Debt

One core takeaway from the Energy Information Administration’s recent 2015 Short Term Energy Outlook is that the coal industry in general is looking at less production, lower market share and fewer players over the next year. 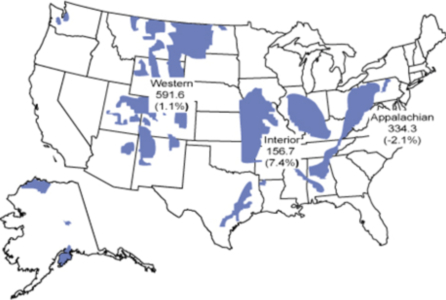 These projections corroborate those of most independent analysts, many of whom also point to a now-constant industry struggle to keep costs down as the maturation of coal-producing regions pushes them back up (many of the easy pickings are gone, especially in Appalachia). Coal-plant retirements continue, solar and wind remain lucrative alternatives, and coal’s regulatory horizons remain cloudy.

The hoped-for fix from a robust export market will seem further from reach than ever as Cloud Peak Energy and Arch Coal will report lower exports this year. Futures markets for U.S. thermal-coal exports are in the mid-$60-per-ton range through 2021, a long drop from the heady days of $120 in 2011.

Stock analysts are expecting little improvement in the rock-bottom prices that characterize most coal stocks.

The coal industry is still not exactly small; 900 million tons is 900 million tons. Producers, however, are stumbling, and they will continue to stumble but much more frequently and dramatically then the rate of decline in coal production itself.

Most U.S. coal companies are posting losses or incurring extraordinary costs related to speculative ventures, like coal-export ports and new mining investments. The next few years will be a continued drain on company liquidity. Arch, Alpha Natural Resource and Peabody Energy all have posted losses for several years running now and even Cloud Peak, which is the black sheep in a way because it’s still in the black, have reported deterioration in their liquidity fundamentals. Cash remains the true measure of how long a company can hang on when an industry is in decline, and none of these companies is doing well by this metric.

As Arch, Alpha and Peabody burn through cash reserves, it’s a race again time, especially against looming debt-repayment deadlines. How these companies will renegotiate new debt arrangements after five or six years of losses and a poor price outlook is uncertain (Arch’s $5.1 billion in debt was secured at rates from 7-9.9 percent). Its current yield to maturity is a whopping 37 percent, according to some analysts.

This period of decline is also raising other issues that are likely to be answered by the blunt instrument of the market. Most of the companies are posting declining asset values and the loss of almost any goodwill among lenders. Mines are being closed or idled. Cloud Peak, Alpha and Peabody are all combining their operations in the Powder River Basin in hopes of limiting their exposure to the region’s mostly lower-quality coal—and the market has all but eliminated demand for such product. Guidance from each of these companies for 2015 reflects lower production expectations, at lower prices.

Most of these companies are also looking at selling non-core assets, which include mines and properties that are not yielding income. The price for many coal mines in the U.S. is quite low due to the larger market dynamics. As the market drives companies to reconcile their true levels of economically minable reserves with that being reported to investors we should expect a much smaller level of reported reserves, probably from fewer companies. This may start to occur this year.

The one bright spot for the coal industry appears to be the Illinois Basin. The region’s production numbers rose in 2014 by 4.6 percent, reflecting the continued decline of the Central Appalachian domestic thermal-coal market. Many producers—in both the Illinois Basin and the Powder River Basin—have their sights set on gains as Central Appalachia declines and as, by their somewhat fantastical projections, demand for export rises. While the Illinois Basin has shown gains, the fact is that international prices undermined 2014 goals for exports and probably will do the same in 2015. While the region boasts some low-cost mines, the downward trajectory of prices has diminished value expectations. The Illinois Basin, in other words, is a shining star in an otherwise dark sky.

For 2015 we can expect less production, flat prices, fewer exports, tight margins and low stock prices. The likelihood will increase for company buyouts or consolidations, and asset sales are all but certain. Expect greater interest from overseas investors in U.S. coal reserves. Expect more scrutiny from Washington as the coal industry maintains its largely oppositional posture to any form of regulation. Expect no coal-industry innovation on the carbon-capture front.

At the end of 2015, the coal industry will be another year older and deeper in debt.