According to Swarup, increased production by Coal India Ltd has resulted in a decrease in coal imports.  With Coal India and coal fired power plant inventory both hitting record levels in 2016,and solar power project construction at record high rates, IEEFA forecasts coal imports will continue to decline over 2016/17.

Indian Minister of State for Power, Coal and New & Renewable Energy Shri Piyush Goyal announced a record 6.93 gigawatts (GW) of new renewable energy projects were commissioned across India in 2015/16. Minister Goyal targets the installation of 10.5 GW of solar in 2016/17 (equal to a fifth of the entire Australian electricity capacity), and treble the 3.1GW commissioned in 2015/16.

For all the coal industry continues to point to India as a source of growth for thermal coal, the reports out of India show that far from growth, India is looking to rationalize and modernize its coal fired power fleet in the face of increasing water stress and particulate pollution. Having doubled the coal cess in the latest budget, in May 2016 India announced plans to close 37 GW of coal fired power capacity that has reached the end of its useful life and where upgrades are not commercially viable.

In the US, coal production declined a record 33% yoy year to date May 2016. This coincides with reports that the US coal fired power fleet has now slated a cumulative 102 GW or 233 coal power plant closures this decade. Analysts now forecast that the US could install 16 GW of solar in 2016; double that achieved in 2015.

In China, the first four months of 2016 saw electricity consumption growth of only +0.9% yoy, continuing the decoupling of electricity from +5.8% industrial value-added growth. Within this is the continuation of a trend away from thermal power generation, with hydro-electricity generation up +15.5% yoy. Like in 2014 and again in 2015, thermal generation in January-April 2016 was down 3.2% yoy. Total Chinese coal output across China was down 6.8% yoy to 1,081Mt. 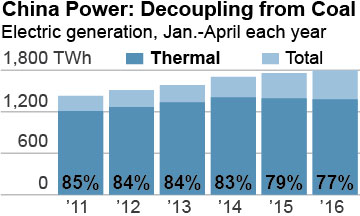 In China in May 2016, Shenhua Energy Group has announced plans to invest in a US$2bn solar thermal plant in conjunction with Solar Reserve. Shenhua’s move illustrates an emerging global theme where fossil fuel companies are looking to transform their businesses in light of this technology and policy shift.

In May 2016, Total SA announced the investment of US$1bn to acquire Saft SA, a world leading battery manufacturer. This follows Total’s 2011 US$2bn acquisition of SunPower Inc., the manufacturer of the world’s most efficient solar modules. In India in May 2016, the Adani Group trumpeted its plans to build a US$10bn 10GW solar industrial park in conjunction with the Rajasthan Government and also commissioned the world’s largest solar project (a US$650m, 648MW plant in Tamil Nadu). In April 2016, Statoil of Norway invested US$1.4bn in German offshore wind.

The lowest priced utility scale solar project in the world to-date was announced in Dubai this month, where a new solar project of 800MW was tendered successfully at an unsubsidized price of just US$30 per megawatt hour (MWh). This price is below the cost of new coal fired power anywhere. The deflationary impact of renewables is clear: The cost of solar electricity in Dubai is down 50% in just over one year relative to the 200MW solar tender finalized in early 2015 at US$59/MWh.

This all provides confirmation that the global electricity markets and leading firms are transforming a great deal faster than anyone expected.