An IEEFA analysis finds the effective carbon dioxide capture rate at San Juan -- after including its mine emissions -- would be no more than 72%, not the 90% that Enchant claims

DOE says it intends to evaluate the full life cycle emissions for each funding application and “will give preference to applications that reduce GHG [greenhouse gas] emissions to the greatest extent across the full end-to-end project inclusive of upstream and downstream emissions.” DOE also says projects must achieve a minimum unit-widecarbon dioxide (CO2) capture rate of 95%“once stable operations are achieved.”

Like other proponents of carbon capture and storage (CCS) seeking federal funding of their projects, Enchant Energy and its allies claim that retrofitting the San Juan Generating Station (SJGS) in New Mexico for carbon capture could capture 90% or more of the CO2 emitted by the power plant. Real-world evidence suggests that this carbon capture rate is unrealistically high. Yet even if it were achievable, the total climate impact of SJGS would still be significant because of the substantial methane emissions from the San Juan coal mine that supplies fuel to the station.

Our analysis finds that the effective CO2 capture rate at the plant after including the mine’s methane emissions would be no more than 72%. The figure is likely too high, since it assumes Enchant will be able to consistently capture 95% of CO2 generated at the plant.

IEEFA has chosen to focus on Enchant’s proposed project for three reasons. First, there is publicly available data on the production and emissions at both the plant and the mine. Second, Enchant has acknowledged that there is very limited investor interest in its carbon capture project; consequently, it will be seeking almost $1 billion in funding from the federal government. Finally, San Juan’s current owners have decided that the plant is no longer economical to operate and should be retired this year.IEEFA’s analysis concludes:

As disappointing as these findings may be to carbon capture advocates, they likely substantially understate the SJGS project’s total climate effects. In addition to uncaptured CO2 from the power plant and significant methane emissions from the San Juan coal mine, CO2 can leak during transportation to a storage site, and may also leak from underground storage facilities. In addition, if SJGS carbon were used for enhanced oil recovery (EOR) projects, significant additional volumes of CO2 would be released during the production process and through consumption (CO2 leakage and the CO2 emissions from EOR are not considered in this analysis).

The problem of associated methane emissions is endemic not only to SJGS, but also to other coal and natural gas plants where carbon capture is being proposed, as well as to “blue,” or natural gas-fired hydrogen projects that are seeking state and federal subsidies. For example, in the case of a gas-fired generator, even if a 90% capture rate is achieved over the long term, there are still likely to be significant methane leaks during production of the natural gas and its transportation to the generator, as well as from CO2 pipelines and the underground storage facility. 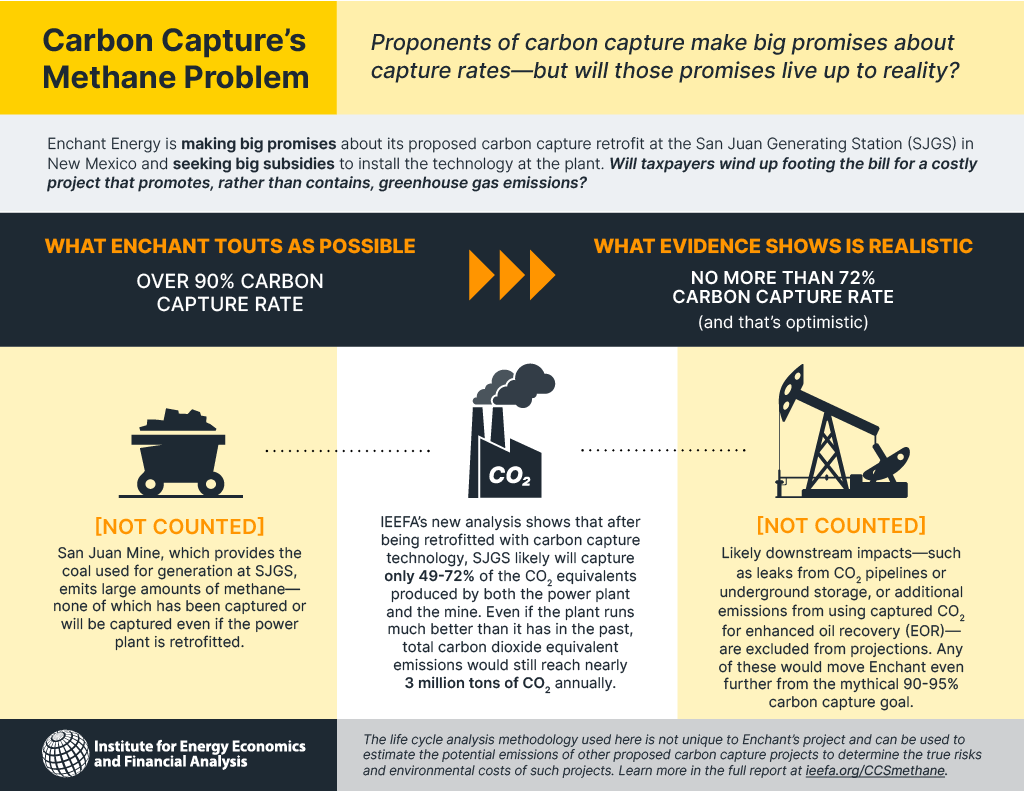