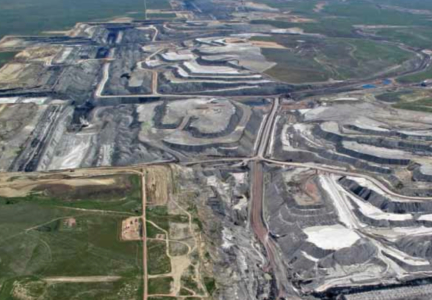 A report published yesterday revealing the likelihood that coal-mining companies cannot meet their cleanup obligations shows that the three biggest Powder River Basin producers are probably not in compliance.

Those producers—Alpha Natural Resources, Arch Coal and Peabody Energy—have taken millions of tons of coal from federal lands in the Powder River Basin, the largest single repository of U.S. coal reserves. (Only the smallest of the big four Powder River Basin, Cloud Peak Energy, appears to be in compliance with legal requirements that miners be solvent enough to clean up the messes they leave behind.)

But what about the rest of the industry? Is non-compliance with mine-cleanup obligations pervasive?

Indeed it is, according to the report, published jointly by the Western Organization of Resource Councils, the Natural Resources Defense Council and the National Wildlife Federation. At issue is whether these companies are complying with the Surface Mining Control and Reclamation Act (SMCRA) of 1977, a law meant to insure that when coal companies depleted the reserves of mines they would restore the sites to their original state. Efforts to enforce SMCRA over the years have been weak, and yesterday’s report—an update of one published eight years ago—finds much that can be reformed.

SMCRA allows companies like Alpha, Arch and Peabody to “self-bond,” that is, to pledge assets that can be made available to clean up the mines they leave behind. The program is in lieu of having a company post a bond and pay market-rate insurance premiums.

Self-bonding requires that companies meet a clear-cut test of assets to liabilities, however, and that’s not happening for the big ones. The report published yesterday shows that for Alpha, Arch and Peabody, liabilities exceed assets.

THESE COAL COMPANIES ARE ALL SO HEAVILY IN DEBT AND HAVE SUCH FAST-DECLINING NET WORTH THAT IN TRUTH THEY LACK THE ASSETS TO QUALIFY FOR SELF-BONDING. They continue, however, to act out a charade that suggests otherwise.

The report estimates that well over $2 billion in outstanding liabilities exist in the Powder River Basin alone. That $2 billion is more than the combined market capitalization of Peabody, Arch and Alpha.

This may be news to many regulators, but not all of them. The federal government very recently has said it is investigating Peabody Energy on this issue, and regulators in West Virginia and Wyoming are calling into question the ability of Alpha Natural Resources to meet its financial obligations.

One of the most important findings of the report is that the federal self-bonding program is active in many states, including Alabama, Arkansas, Colorado, Illinois, Indiana, Louisiana, Mississippi, New Mexico, North Dakota, Pennsylvania, Texas, Utah, West Virginia, Virginia and Wyoming. The rules for the programs are essentially the same from state to state, since SMCRA is a federal law administered by state governments. Requirements for each company, notwithstanding accounting treatments that might mask the lack of compliance, are the same regardless of whether a program is authorized in Alabama or Arkansas. So what’s occurring in West Virginia and Wyoming is ripe to occur in those 10 other states too.

The report also sees through the common practice used by some coal companies of separating parent company finances from their mining subsidiaries, making it appear as if subsidiary mines are in compliance. This tactic will not bear much scrutiny. Recent reporting by Reuters on the federal investigation into self-bonding quoted a federal administrator saying that if a parent cannot comply, than neither can its subsidiaries.

THIS ALL SHOWS THERE IS AMPLE EVIDENCE IN THE PUBLIC RECORD FOR REGULATORS IN EACH OF THE STATES LISTED ABOVE TO START ASKING MORE QUESTIONS, or in many cases just to start asking questions. Arch, Alpha and Peabody all have holdings in states outside the Powder River Basin, as do other coal companies with stressed balance sheets.

If ever there were an opportunity for state regulators to step up, this is it. Our report last year on the Texas Railroad Commission’s handling of financial catastrophe at Energy Futures Holdings offers a cautionary tale about regulators who don’t respond robustly to publicly available information. In that case, the railroad commission initially failed to respond formally to an obvious compliance failure. Then—under public pressure—it called for stepped-up reporting, but at first did not require the company to put additional resources in place to meet is obligation. Not until EFH finally declared bankruptcy did the commission demand additional resources.

Texas regulators, in other words, ignored red-flag warnings in favor of a process that relied solely on company reports of its financial fortunes. Regulators, to the detriment of the public, rarely look — as they should — to outside, independent sources of information.

The report published yesterday gives regulators a blueprint to enforce compliance. We will be watching and reporting on how states handle their obligations to protect the public interest. As the report notes, a failure to secure tangible value from coal companies to clean up mine sites from coal companies leaves taxpayers deeply exposed.