The Global Wind Energy Council’s annual review of the wind sector in 2015 provides further evidence of the accelerating momentum in the world’s shift to a lower-emissions global economy. 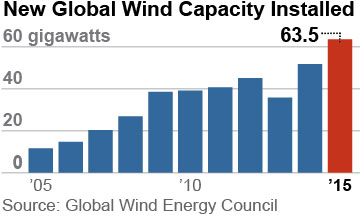 The combined impacts included a decline in the global consumption of thermal coal in 2015. IEEFA expects these trends to accelerate in 2016 and beyond as technology developments continue to improve the relative cost competitiveness of low-emissions technologies and the policy headwinds to fossil fuels builds on the international climate-change agreement inked last year in Paris.

Geographically, the wind industry’s growth is skewed heavily toward the Asia-Pacific region. China installed a world record 30-32 gigawatts of wind in 2015 (the official tally varies by source and definition of when a project is formally commissioned). India was the fifth largest installer of wind globally, with installs of 2.6 gigawatts to take its total cumulative installs to 25 gigawatts. We note that the Government of India has set a target of 60 gigawatts of cumulative wind installs by 2021-22, suggesting that policy developments will more than double installs before the end of this decade.

Momentum is starting to build across Japan, Korea and Taiwan, albeit from a very low base and with a lack of a strong policy commitment to date. This year will likely see wind-energy expansion across Pakistan, Thailand and Vietnam.

In Europe, the lingering, unresolved residue of the global financial crisis and a low growth outlook are clouding what has been a historically strong market, making for very sporadic development. Still, Germany was the third largest global developer of wind (behind China and U.S.), installing a record 6 gigawatts of onshore and offshore wind in 2015 alone.  The U.K. installed just 0.98 gigawatts of wind-powered production after a record year in 2014, but stronger activity across France (1.1 gigawatts), Poland (1.3 gigawatts) and Turkey (1 gigawatts) shows promise.

The Americas remain a strong region for wind development. In 2015, the U.S. installed close to a record 8.6 gigawatts. Canada has resumed a solid level of investment commissioning 1.5 gigawatts of capacity, while Brazil was the fourth largest market globally with  a record 2.7 gigawatts installed. Mexico (adding 0.7 gigawatts) is now in the top 12 countries globally for annual wind installs, and a strong policy commitment augurs well for continued growth.

ONSHORE WIND-GENERATED ELECTRICITY—IN ADDITION TO DIVERSIFYING ELECTRICITY SYSTEMS,  ADDING DOMESTIC SOURCING AND CREATING ZERO-EMISSIONS BENEFITS—IS ALSO INCREASINGLY COST COMPETITIVE with new fossil-fuel generation. In an increasing number of wind-resource-rich countries, wind is now the lo- cost source of new supply. In Texas, wind electricity is priced at $20-30/megawatt hour (MWh) (net of subsidies), while in Morocco and Mexico prices are being set now below Euro30/MWh. In Brazil, wind at US$48/MWh is the preferred low-cost source of new supply. In India, new wind is priced at Rs3.67-5.87/kWh (US$55-90/MWh), a deflationary outcome that is below the cost of new imported-coal generation.

While the offshore wind sector remains an expensive source of electricity, 2015 was another record year on that front, too, with 3.4 gigawatts installed globally, increasing the cumulative installed base by a third, to 12 gigawatts. This investment should prove instrumental in proving up the technology design and engineering capacity for a rapid acceleration in the commercial deployment of offshore wind globally over the next decade. Japan, the U.S., China, India and Korea all are poised to capitalize on lessons learned by the U.K., Germany and Denmark.

Offshore wind generation brings the potential for major diversification of many electricity systems. And its very high capacity-utilization rates (up to double that of onshore wind, which averages 25-30 percent globally) take maximum advantage of more consistent and stronger offshore wind resources. Offshore wind also provide an important resource for land-constrained countries like Japan, Korea, India, China and the U.K., particularly given its relative proximity to major population centers in coastal areas.

Technology developments combined with massive economies of scale and increasing financial-sector interest make the global wind generation sector a key enabler of the Paris commitments to constrain global warming to below 2 degrees Celsius.

Our view is that wind-energy progress—when viewed in conjunction with similar developments in the solar, battery storage, grid and energy-efficiency sectors—makes a global electricity-sector transformation self-evident and inevitable.

Notes From China and India: ‘Silent Revolution’ in Hydro, the Price of Capital Is Down, More