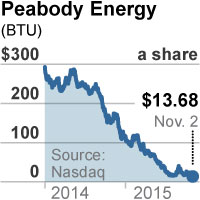 Everybody knows coal companies are in bad financial shape. What investors need now is a straight answer on whether the decline is structural or cyclical. 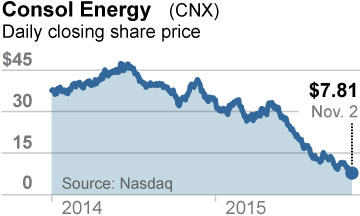 Here’s a clue from Nick Deluliis, CEO and president of CONSOL, speaking on the company’s third-quarter earnings call last week: 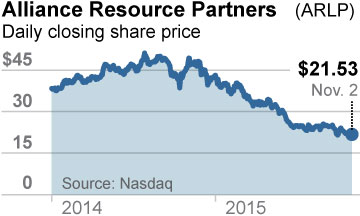 “From a demand side, the plants are in place. And that’s been factored in as to what each of our customers, including TVA and LG&E, expect to run, and the coal that they expect to buy. So we feel pretty confident of what the demand side is. And it’s really back to the supply side that is creating some of the difficulty in determining what the right level for us is … If you look at the different [coal production] basins, I’d say it’s true that there is some percentage, at least 20 percent-plus in each basin, that’s being produced today that’s below people’s cost. We just don’t think that’s sustainable.” 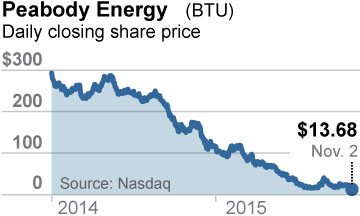 And then here’s Glenn Kellow, president and CEO of Peabody:

“Limited capital investment is insufficient to sustain current production, and coal prices will need to rise well above levels we see today to incentivize new investment. And over time we expect the gradual reduction in supply, as well as increased coal demand, to lead to improved fundamentals.”

Deluliis and Craft in their comments embrace strategies for a shrinking industry, , one that shows their commitment to selling coal to power plants that are poised to survive in a market where natural gas prices remain low. (Craft added that he sees gas prices staying flat for the next five years, a circumstance that would not bode very well for coal producers.)

Kellow, on the other hand, signals that Peabody continues to believe in macro analytics built around mere potential for higher demand for coal and higher natural gas prices and that offer no game plan for what happens if those trends do not materialize.

CONSOL AND PEABODY, LIKE MANY OTHER U.S. COAL PRODUCERS, ARE LOOKING TO SELL ASSETS in order to raise cash. CONSOL has made progress on this front, already producing two transactions that have raised $100 million, and the company has stated that it plans to put an additional $1.5 billion to $2.3 billion in assets up for sale.

Peabody’s Kellow, by contrast, says only this:

“We have probably the premier coal portfolio around the globe and not just in terms of our producing assets but also we have significant land positions, infrastructure assets and reserve positions, et cetera. So I think we are seeing buyer interest for the right assets. And I would say that that is also both in some of our non-core areas but also I’m talking about operating lines.”

So CONSOL offers actual detail on this point—straight talk that helps—while Peabody stays vague, as is its mode, whether on prices, asset sales or natural gas outlooks. It’s no wonder Peabody’s performance outlook fails to bolster investor support.

OTHER POINTS OF INTEREST ON THOSE EARNINGS CALLS INCLUDE PEABODY’S KELLOW STATING THAT the company’s coal price target for Powder River Basin coal is $13.57 per ton. This is misleading, especially since, as reported by Platt’s, Stifel has identified a 23 million ton contract Peabody entered into for 8800 Btu coal for $11.26 per ton for 2016.

What the companies see when they look at each other is also interesting. CONSOL has been fielding inquiries about legacy liabilities from its deal with Murray Energy. Apparently its heralded $850 million transaction with Murray in December 2013 may have had some hair on it. What is a bit surprising is that the comments were made in response to a question about potential bankruptcies and blowback liabilities. Such liability disputes are front in center in the Patriot bankruptcy where Peabody has worked hard to deny its liabilities related to employee pensions and other obligations.

The larger picture among coal producers is of an industry that is sorting itself out. Underlying all of the strategizing are basic questions that each company is asking: How much demand decrease is likely and what is the proper supply-adjustment strategy?

Do some of the newly minted Master Limited Partnerships prove profitable or in a low-price environment will they all simply strain to meet promised dividend targets? Which mines will survive this grinding process? What new business model will emerge, which companies will remain?