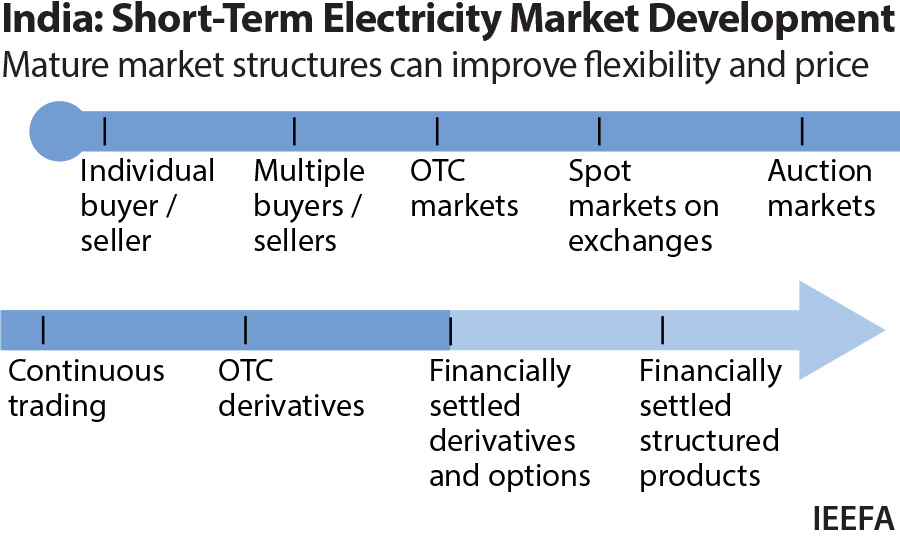 9 June 2021 (IEEFA India): The introduction of derivatives to India’s short-term power market will make it easier for renewable project developers to enter into offtake arrangements with state-owned distribution companies (discoms), finds a new briefing note from the Institute for Energy Economics and Financial Analysis (IEEFA).

“The launch of new financial instruments will enable developers to hedge their offtaker risk without signing long-term contracts with discoms for the financial closure of projects,” says author Vibhuti Garg, Energy Economist, Lead India at IEEFA. PPAs provide certainty of power offtake over a long duration and de-risk investors from price volatility.

However, Solar Energy Corporation of India (SECI) currently has 15-16 gigawatts of auctioned capacity waiting to be signed by discoms, and this backlog of unsigned PPAs is now impacting the development of new renewable energy projects.

Discoms are struggling with huge financial losses and have become increasingly reluctant to enter long-term PPAs with renewable energy developers due to the discovery of record low renewable tariffs. This very positive deflationary trend saw solar tariffs in India dip as low as Rs 1.99/kWh at the end of 2020.

“The sale of power in the futures market will provide flexibility and certainty of supply for both discoms and developers. It will also help develop the price signal needed to incentivise supply into peak demand periods, which is the key to enabling battery deployments and demand response management,” says Garg.

Under the proposed structure, physical delivery of electricity will be separated from financial settlement.

Long-term contracts in the physical (spot) market will be traded on power exchanges under the jurisdiction of the Central Electricity Regulatory Commission (CERC), while in the financial (derivatives) market contracts are set to be traded on commodity exchanges regulated by the Securities and Exchange Board of India (SEBI).

The physical and financial electricity markets will complement each other, according to Garg.

“Financial products such as futures, options and swaps don’t require physical delivery of electricity so this opens up the market to hedgers, speculators and other participants who can add liquidity without owning electricity assets.

Physical delivery of electricity will be separated from financial settlement

“The financial market will increase trade volumes and will be lucrative for players including developers, discoms, open access buyers, traders, investors in the power sector and others who also have the ability to take on risk.

“It will also enable the sale of hybrid products. With an increasing share of renewable energy in the total generation mix, multiple products including wind, solar and biogas, along with battery storage, are likely to see more demand.”

The rollout of the financial market follows the launch last year of the Real-Time Market and the Green Term-Ahead Market.

“There is already a framework in place for a national electricity market, and the financial market will provide another platform for national trading of renewable energy, as well as incentivising new investments in battery storage,” says Garg.

IEEFA’s note makes recommendations for the design of the financial market including determining a reference price that gives signals to investors for new renewables capacity and storage infrastructure; creating simple, stable and standardised financial products; and a real-time surveillance mechanism to prevent collusion and influencing of price.