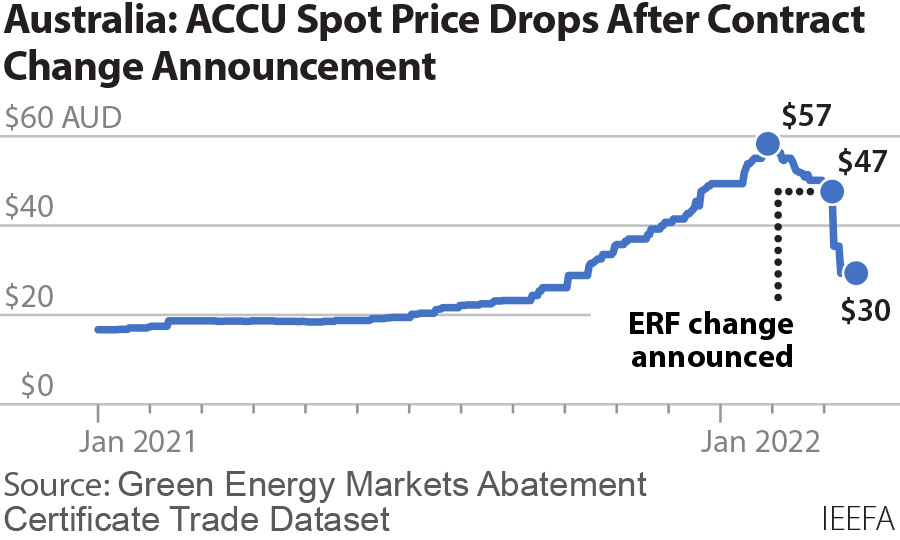 28 March 2022 (IEEFA Australia): A recent change to the Emissions Reduction Fund delivers savings to big emitters and select carbon abatement projects and puts Australia’s 35% by 2030 emission reduction forecast, taken to Glasgow, at risk unless taxpayers fork out for additional abatement, or find other ways to reduce emissions, according to a new report by the Institute for Energy Economics and Financial Analysis (IEEFA).

The total cost to the government/taxpayer to stay on track with 35% emissions reduction post this recent change could be between $600 million and $2.5 billion – or even more.

Eligible carbon abatement projects in the Emissions Reduction Fund (ERF) scheme — such as soil carbon sequestration, revegetation, landfill gas emissions abatement, energy efficiency etc — earn one Australian Carbon Credit Unit (ACCU) for each tonne of carbon dioxide (CO2) abated (e.g. carbon that is not released into the atmosphere, or that is absorbed from the atmosphere).

The total cost to the government/taxpayer could now be between $600 million and $2.5 billion

The ERF change, effective 4 March, allows carbon abatement suppliers who were in fixed delivery contracts with the Federal Government to exit from their contracts.

The Institute’s Lead Research Analyst for Australian Electricity, Johanna Bowyer, says ACCU prices were $47 before the ERF announcement. After the announcement, prices went into free-fall to hover around $30 in mid-March.

“With the change, fixed delivery contract holders can sell their carbon credits on the open market to other buyers including emitters and corporates, rather than the government, and receive higher prices for them,” says Bowyer.

Many carbon abatement projects will now receive a higher payment for emissions abatement than they originally accepted under contract with the government.

Emitters such as oil and gas producers who face a near-term requirement to reduce emissions will have to pay less for their ACCUs, as the price has plummeted.

Bowyer says the ERF change has been introduced without public consultation, when the country may be only weeks away from a federal election being called, at which point the government will move into ‘caretaker’ mode and, customarily, refrain from major decisions.

“The change undermines the carbon market as a whole. The unexpected nature of the change and the price volatility it has created reduces certainty for investors in the nascent carbon market. Many will be worse off.

The change undermines the carbon market as a whole

“Stakeholders that are developing or investing in carbon abatement projects may have less confidence in moving forward with projects and investments.

“This recent change also means Australia will be behind on its emission reduction task unless it pays for more abatement or takes additional action to reduce emissions.”

There are 112 million outstanding ACCUs to be delivered to the government through the fixed delivery contracts.

“That 112 million tonnes of abatement was factored in to meet the Federal Government’s official 26-28% target, and the 35% emissions reduction forecast taken to Glasgow,” says Bowyer.

“So now, the government is up to 112 million tonnes of carbon dioxide equivalent (CO2-e) behind on its emissions reduction task by allowing these fixed delivery contract exits.”

If the whole 112 million ACCUs exited their government contracts prior to 2030, then the government would not be on track to meet the 35% emissions reduction forecast taken to Glasgow, unless it undertook other additional action to meet the target – such as buying replacement ACCUs, increasing the share of renewable energy in the grid, or taking other actions.

Federal Labour would also be behind on their 43% emission reduction target if they were to take office.

The report notes that if the Federal government went to the market to buy replacement ACCUs, so that they stay on track with previous emissions projections, this would come at a high cost to taxpayers.

“Carbon credit prices are now much higher than when the original fixed delivery contracts were signed between suppliers and the Federal Government,” says Bowyer.

“It’s highly unlikely the Federal Government will be able to purchase new ACCUs at prices anywhere near the original average of $12.50. Prices closer to the current market rate of $30 or even the previous $47 seem more likely.”

The $12.50 per ACCU average exit fee the government will receive frees up money to “support new ERF projects” according to the Clean Energy Regulator, but will not go far towards purchasing future required emissions reductions.

If all 112 million fixed delivery contracts were exited, the government would receive $1.4 billion in exit fee revenue and will save $1.4 billion by not having to pay out the initial contracts, for a total government benefit of $2.8 billion.

That means the total cost to the government/taxpayer to stay on track with 35% emissions reduction post this recent change could be between $600 million and $2.5 billion – or even more if ACCU prices increase back above $47.

The government will also need to purchase more ACCUs in coming years as it seeks to reach net zero by 2050.

“It’s quite obvious that taxpayers face an extremely big bill if we continue to rely predominantly on the ERF to meet the 2050 net-zero target,” says Bowyer.

The report recommends strengthening the Safeguard mechanism baselines, and undertaking an inquiry into ACCU integrity (as recommended by Professor Macintosh of ANU).

Ideally, the whole carbon market should be redesigned

“However, ideally, the whole carbon market should be redesigned as a comprehensive “gross” emissions trading scheme in which emissions are paid for or offset in full, rather than only emissions above a baseline.”

The report notes a long-term mandatory obligation for emitters to reduce emissions in each sector should be implemented, with a mechanism for flexibility via trading. Sectoral targets should be based on a steady reduction in annual emissions in line with the Australian Government’s net zero by 2050 targets, with interim targets set well below an expected business-as-usual trajectory.

This would enable Australia to meet much more stringent emissions reduction targets across all sectors, and align with the Paris agreement to limit global warming to 1.5 degrees Celsius.