We’ve just published a study concluding that the proposed coal-fired New Kosovo Power Plant—if it’s built—would increase electricity prices by as much as 50 percent in Kosovo and damage the economy of the small country.

The study, “The Proposed New Kosovo Power Plant: An Unnecessary Burden at an Unreasonable Price,” ( also see Albanian version) urges the World Bank and the U.S. and Kosovo governments to reconsider their support for the project.

We see the New Kosovo Power Plant, or NKPP, as a social and financial step backward for Kosovo. It would put households across Kosovo in a bind and, as Visar Azemi, coordinator for the Kosovo Civil Society Consortium for Sustainable Development (KOSID), says, would mean “turning electricity into a luxury for many.”

The proposal is riddled with questionable assumptions and arrangements, not the least of which is a plan to build it after accepting just one construction bid, by New York-Based ContourGlobal. And it flies in the face of the stated mission of the World Bank whose aim is to reduce poverty and to promote sustainable, clean development. 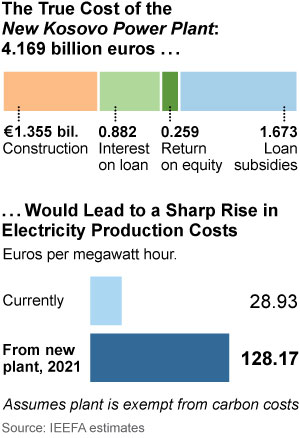 And our research shows that the cost of the New Kosovo Power Plant far exceeds the government’s projected cost of €1.0 billion. We think it would be close to €4.2 billion by the time the plant goes online as planned in 2021. And we think it would require massive subsidies.

Our calculations find that if the plant is built:

Kosovars already pay too much for electricity. This plant would be particularly harmful to low-income households, forcing people to choose between paying for electricity and other basic necessities.

Our report also raises several red flags around the financing behind the project:

We note also that details made public around the project are incomplete, and transparency is lacking.

A far better way forward for Kosovo is to invest wisely in much-needed energy-efficiency improvements and embracing the renewable-energy revolution. Buying into the New Kosovo Energy Plant would be the wrong move at the wrong time.

The full report, “The Proposed New Kosovo Power Plant: An Unnecessary Burden at an Unreasonable Price,” is posted here.