Wind, solar and hydro’s share of the U.S. electric power market may reach 33 percent or more by the end of 2026.

Construction has already begun on the first two commercial-scale offshore wind farms in the U.S.

Several of the largest, traditionally coal-based utilities in the country such as Georgia Power, Duke Energy and the Tennessee Valley Authority have announced plans for a coal phaseout by 2035.

Surging global energy prices have been a central theme over the past year, as rebounding economic activity vied with new waves of COVID infections, and the shock of Russia’s invasion of Ukraine has roiled oil and gas markets in particular. But the soaring cost of fossil fuels and unexpected disruptions in energy security are now supercharging what was already a torrid pace of growth in solar, wind and battery storage projects. 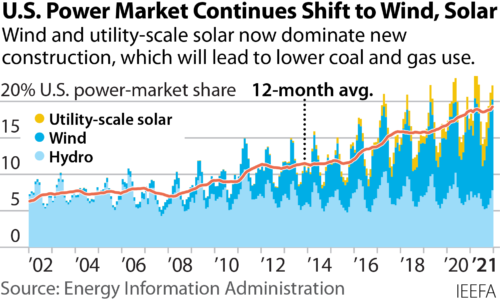 IEEFA predicted last year that wind, solar and hydro’s share of the U.S. electric power market would approach 30 percent by the end of 2026. IEEFA now believes the forecast reflected the low end of possible growth, given the significant acceleration in expected solar and wind (particularly offshore) capacity installations through 2026. We now expect that clean energy’s share of the electric generation market could hit 33 percent or more. Together with existing nuclear generation, this would push the U.S. share of carbon-free electricity to well over 50 percent—a massive transition from just five years ago.

Some of the most notable recent developments include:

The compelling economics and proven reliability of renewable energy and storage have changed perceptions in utility and corporate boardrooms across the U.S., driving a buildout of wind and solar generation portfolios and prompting businesses and consumers to push for greater access to green energy. With fossil fuel price volatility and energy security currently among the top concerns of executives and policymakers, IEEFA finds the energy transition is tipping even more strongly toward renewables and battery storage, and expects this trend will continue to drive fossil fuels out of the power market.