Given the all-out bidding war with Asian buyers for the remaining limited global LNG (liquefied natural gas) supplies, fuel prices continue to climb to record highs, forcing some price-sensitive countries out of the market entirely.

LNG prices in Asia in October were up 300% compared to last year. In China and India, LNG demand has slumped by 21% and 18% year on year, respectively, due partly to the uneconomic fuel costs.

Less LNG demand growth in Asia could mean that fewer LNG import projects are necessary; and in many emerging markets, these projects are already experiencing delays and cancellations.

Liquefied natural gas (LNG), once heralded as “the champagne of fuels,” is quickly falling out of favor in key growth markets.

Volatile, unaffordable prices and supply challenges in the global market have crimped demand in Asia, and the International Energy Agency (IEA) has declared an end to the “golden age of gas.”

The era of rapid natural gas demand growth is over

This has driven prices to record highs, forcing some price-sensitive countries out of the market entirely. LNG prices in Asia in October were up 300% compared to last year.

In China and India, LNG demand has plummeted 21% and 18% year on year, respectively, due partly to the uneconomic fuel costs. Pakistan and Bangladesh have slashed imports by 16% and 15%, respectively. As a result, the average utilization of existing LNG terminals in all four countries has fallen compared to the third quarter of last year. 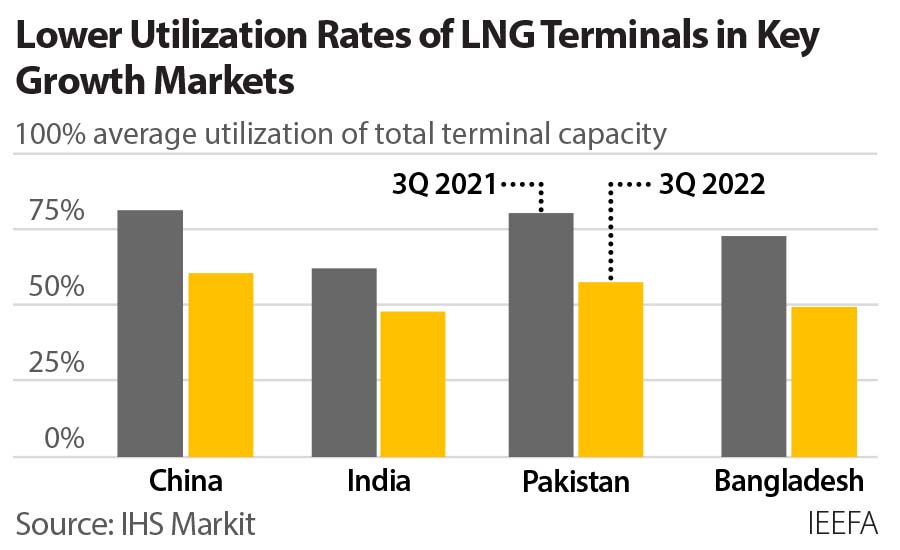 LNG markets are widely expected to remain tight until significant new supply capacity comes online — unlikely until 2026. As a result, many forecasting agencies have slashed medium-term expectations for LNG demand in emerging markets.

Throughout Asia, US$490 billion of gas-related infrastructure projects have been proposed, but less LNG demand growth in the region could mean that fewer import projects are necessary.

Projects in many emerging markets are already experiencing delays and cancellations. In India, for example, six new terminals were anticipated online this year, according to the International Gas Union. None have been commissioned. Although some are still aiming for a December launch, most have delayed target operations to next year.

Some may face larger setbacks. For instance, recurring delays at the Jaighar LNG project prompted floating terminal provider Hoegh LNG to cancel its 10-year charter and reroute the vessel to Europe. Moreover, from April to June, three of India’s six operational LNG terminals were running at below 20% capacity. Importantly, India’s LNG demand is not expected to surpass 2020 levels through 2025, suggesting capacity may continue to be underutilized.

In China, two out of eight new terminals expected online this year have been commissioned. Developers have cited expensive prices and lackluster demand as reasons for delays. In addition, the 8 gigawatts (GW) of new gas-fired power capacity added this year was dwarfed by the 158 GW of new wind and solar capacity. The IEA now expects Chinese gas demand to grow at just 2% through 2030, compared to 12% average annual growth over the previous decade.

The Philippines and Vietnam have delayed plans to commission their first LNG terminals until next year, partly due to ongoing turmoil in global LNG markets. Even if the terminals are brought online, however, both countries could face exorbitant spot LNG prices, since neither have finalized long-term LNG purchase contracts. San Miguel Corporation, the largest gas-fired power plant developer in the Philippines, reportedly faces delays with eight proposed power projects.

These setbacks belie projections that South and Southeast Asia would account for the lion’s share of global LNG demand growth. To make matters worse, Europe is now absorbing the entire global fleet of floating import terminals through 2025, further deteriorating the outlook for proposed LNG import projects in emerging Asia.

While delays for large infrastructure projects in Asia may not be unusual, many developers have cited volatile fuel prices and LNG procurement challenges as stumbling blocks.

These obstacles are unlikely to disappear soon. LNG markets are expected to remain tight over the coming years, due to limited new global supply additions and higher European demand.