The currently over-supplied global seaborne thermal coal market is faced with slowing demand in the longer term, even in the Asian market, as major coal producing nations like China and India seek to squeeze out coal imports.

There have already been some indications of coal to LNG switching in the shorter term in Europe. Despite lower recent thermal coal prices due to market over-supply, LNG prices have also dipped enough to fall below thermal coal on an energy equivalent basis. This has convinced some Japanese utilities to consider opportunistic coal-to-LNG switching which could see LNG-fired plant utilisation increase and coal-fired power utilisation decline.

According to Bloomberg New Energy Finance (BNEF), two-thirds of the world’s population live in countries where wind or solar (or both) are the cheapest source of new power generation. By 2030, new wind and solar will be cheaper than running existing coal- or gas-fired plants virtually everywhere.

Aside from the domestic issues that the South African coal industry faces, the sector will also need to come to terms with the prospect of fading demand from its major export destinations.

South Africa is more heavily dependent on one nation for its export volumes than other major thermal coal exporters like Indonesia and Australia. In 2018, 48% of all South African exports out of Richards Bay Coal Terminal (RBCT) went to India, a nation with a clearly stated policy of reducing reliance on coal imports. In the first half of 2019, that rose to 60%.

This export industry decline will not happen overnight or even in the next few years – there is time for policy makers to prepare for the coming transition in order to plan for the inevitable social and economic consequences.

At its heart, this is a technology transition and is hence unavoidable - it will happen whether policy makers want it or not. A lack of planning will result in a chaotic transition with negative social and economic impacts of the type South Africa can ill-afford.

As tends to happen in technological transitions, new energy technology will replace coal-fired power faster than most predict. According to Bloomberg New Energy Finance (BNEF), two-thirds of the world’s population already live in countries where wind or solar (or both) are the cheapest source of new power generation.

By 2030, new wind and solar will be cheaper than running existing coal- or gas-fired plants virtually everywhere. This is already the case in India. By 2032, BNEF foresees there will be more solar and wind power capacity installed globally than coal-fired power. Coal-fired power generation will decline 51% by 2050 by which time it will supply just 12% of the world’s electricity.

Global mining giants such as Rio Tinto, BHP, Anglo American and South32 have either withdrawn from the seaborne thermal coal market already or are now considering it.

South Africa’s major export markets are already showing signs of transition away from coal or limited growth potential which will disappoint the industry: 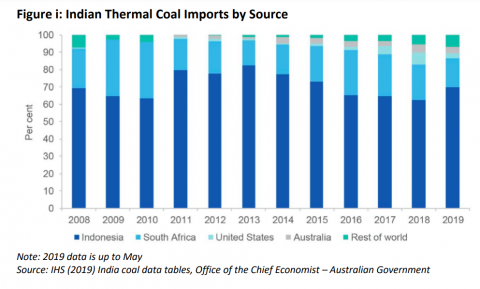 South African coal exporters are likely to seek alternative markets going forward as opportunities for growth in the main export destinations dry up. However, the long term outlook for coal exports to other destinations is also likely to disappoint.

Furthermore, with the global seaborne coal trade set to go into permanent decline, South Africa will see increased competition in these markets from other major thermal coal exporters such as Indonesia, Australia and Russia.

Richards Bay Coal Terminal may have to get used to the idea that an increasing proportion of its annual capacity will become stranded. With a capacity of 91million tonnes per annum (Mtpa), Richards Bay operated with almost 20% spare capacity in 2018.

Richards Bay is not alone in this. The coal terminals at the Port of Newcastle in Australia – the world’s largest coal export port – operated with 25% surplus capacity in 2018 and its proposed T4 expansion project has been cancelled. Concern over thermal coal’s long-term sustainability has led the chairman of the Port of Newcastle to recognise an “urgent need” for the port to diversify away from a reliance on coal, further stating, "While the world's demand for our coal is beyond our control, our ability to invest in new sources of growth and innovation is not.”

Part of that statement was echoed by RBCT chair Nosipho Siwisa-Damasane upon the release of lower 2018 export figures who stated, “The markets are a reality, they are outside RBCT’s control”.

“The markets are a reality, they are outside RBCT’s control”

As Richards Bay faces declining export volumes in the long run, it too will need to plan for an alternative future. That planning should have begun already.