A preponderance of evidence supports our view that renewable energy would be cheaper and cleaner than the proposed coal-fired New Kosovo Power Plant.

Research we’ve looked at (including by Lazard, Agora Energiewinde, and the International Renewable Energy Agency) covers energy markets in well over 20 nations and makes clear that the cost of electricity generated by wind and solar projects is less than the cost of the electricity that would be produced by the New Kosovo Power Plant if its construction proceeds. 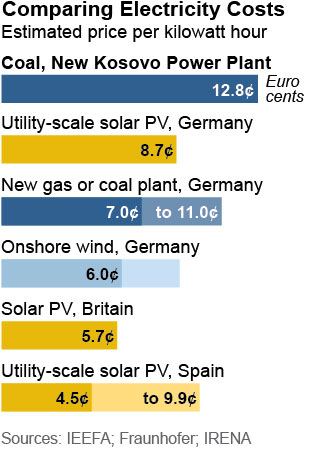 And IEEFA has concluded separately in our own study (“The Proposed New Kosovo Power Plant: An Unnecessary Burden at an Unreasonable Expense”) that the cost of electricity generated at the coal-fired plant would be 12.84 euro cents per kilowatt-hour. This compares with numbers that come in at between 4.5 to 9.9 euro cents per kilowatt hour for wind- and solar-generated power.

An additional factor working in favor of wind and solar: both are anti-inflationary, while coal plant costs rise every year.

Wind- and solar-powered electricity costs have been coming down dramatically as the technology moves from being a relatively untried player to one with constantly improving performance. We see such improvements bringing down the price of solar in the United Kingdom, in Mexico and in India. IEEFA’s research (“Wind and Solar Records Rumble as China and India Accelerate Energy Transition” and “More Evidence India Is on Track to End Coal Exports”) shows China and India surpassing their official goals for how much and how fast renewable energy can be added to power grids in the world two most-populous countries.

The biggest variable now on the price of renewables is the cost of capital. The World Bank, the Obama administration and the government of Kosovo nonetheless have made a choice evidently to use subsidies to support a coal plant even in the face of the reality that wind and solar prices are cheaper and would very likely mean electricity costs to consumers much lower in the short and long term.

The World Bank has been asked repeatedly to release updates to its plans for the New Kosovo Power Plant—plans only partly explained in November, when the government of Kosovo announced that the plant would move forward with a fresh round of project design. To date, the bank hasn’t responded in any meaningful way to more than a dozen such requests.