Overpaid and underutilized: How capacity payments could lock Indonesia into a high-cost electricity future

Capacity payments have been instrumental in promoting private investment in the Indonesian power sector. The practice provides independent power producers (IPPs) an assured revenue stream that covers an adequate return on the significant project capital investment and risks to which they are exposed.

However capacity payments also expose the Indonesian utility, Perusahaan Listrik Negara (PLN), and Indonesian consumers, to significant risk of paying for power that is not needed.

Capacity payments are part of the tariff calculated based on the power capacity of a plant, regardless of whether the power produced by the plant is dispatched, paid by the offtaker for each kilowatt of available capacity.

As renewable energy costs have come down drastically, renewables are forcing utilities, policymakers and regulators around the world to rethink the way the electricity sector is structured. Further commitments to coal-fired power plants will require PLN to make significant financial outlays, saddling the utility with costly 25-year power purchase agreements and payment for potentially un-needed power from underutilized plants. 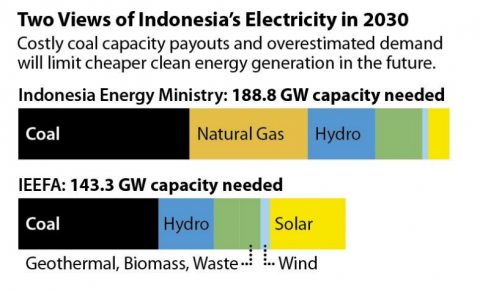 This report acknowledges the importance of continuing the use of capacity payments to encourage private sector investment in Indonesia. However, the more entrenched these commitments are and the farther they stretch into the future, the likelier they will serve the interest of aging and under-utilized thermal power plants at the expense of better investments.

An economical alternative to national energy security exists through the development of renewable energy and the diversification of energy sources in Indonsia’s power generation portfolio.