Obstacles to Building Renewable Power in Kosovo Are Political, Not Technical

Proponents of building a new coal-fired power plant in Kosovo have argued that the plant is needed because Kosovo has very limited ability to support a significant build out of wind and solar power resources.

But a closer look at the situation shows that the obstacles to renewable energy development in Kosovo are more political than technical, and that committing the country’s resources to the New Kosovo Power plant would crowd out investment in wind and solar energy.

Coal plant proponents are actually misquoting a World Bank 2011 Options study for Kosovo, claiming the study showed very little capacity for wind and solar. But in fact the World Bank paper showed: 1) there is almost no mapping of solar energy potential in Kosovo, and 2) current wind mapping supports some wind energy and could produce scenarios that offer potential for more.

The World Bank 2011 study concluded that 1000 MW of wind power is possible in Kosovo, and used a very conservative (and outdated) projection for how often the plant would run, citing a capacity factor of 25%.  But even under this limited scenario, wind power could go a long way toward filling Kosovo’s energy needs.   The report went on to say that for a host of technical reasons, such as inadequate wind speeds, difficult terrain and problems with regional grid hook ups, wind energy is not viable.  However, a subsequent feasibility study for the Zatric Wind Farm in Kosovo, done under the auspices of the Swiss government, showed that the technical problems cited by the World Bank were not substantiated.  The report said wind speeds were sufficient to produce a 35-40MW wind farm, mountainous terrain issues were manageable and investors could be attracted despite the transmission issues. A subsequent analysis of another site in Kosovo, which placed the wind resources in the context of potential renewable resources using a full portfolio of options, found similar results.

The government of Kosovo has set very modest renewable energy goals, but has failed to meet them. The government’s 2013 plan to meet the electricity needs of the country  called for a small contribution from solar energy and a significant increase in wind energy by 2015.  But according to the recently released 2015 annual generation statistics from the Energy Regulatory Office, Kosovo did not consume any energy from wind or solar resources during 2015.

Kosovo does have a number of renewable energy projects in the pipeline for approval, but the projects face severe challenges as the bureaucratic process is slow in Kosovo and the country is sending mixed signals due to its push for the coal plant.   According to the Energy Regulatory Office, Kosovo has one operational wind project (which is apparently not producing electricity), five pending wind projects (179 MW) and 9 pending solar projects (15 MW). Some of the projects filed their applications more than two years ago, though most are recent applicants. If built, the new coal plant would likely render these renewable projects unnecessary.

The potential for significant improvement in Kosovo from investments in energy efficiency is well documented. The World Bank has recently made an assessment of Kosovo’s progress toward meeting its goals for implementing energy efficiency in public buildings, funded with a $31.9 million World Bank investment.  The World Bank has said the project is behind schedule and rated it as “moderately unsatisfactory” due to problems related to competitive procurements. The bank classifies the project, as being at “substantial risk.”

As we noted in our commentary on May 9, renewable energy is showing itself to be a solid competitor against coal plants in head to head price competition. A recent International Energy Agency presentation shows the cost of renewables continuing to decline: 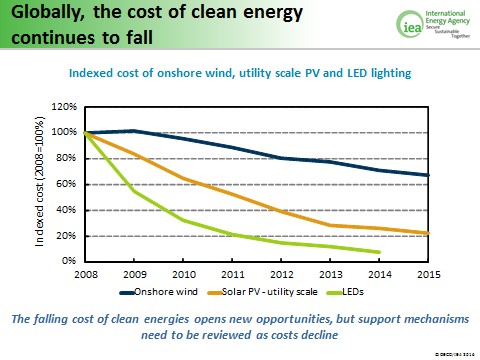 KOSID made formal information requests in March for copies of updated studies the World Bank has conducted on Kosovo’s energy options, but has received no response.