Driven by ever-growing global carbon and pollution concerns, Japan is facing increasing pressure against both its domestic reliance on coal-fired power and its strategy of pushing its subsidised coal-fired power technology onto developing countries.

While Marubeni has not entirely ignored the rise of renewable energy, its seems largely agnostic as it continues to focus much of its power-generation attention on its coal-fired power build-out, particularly in developing countries that will not benefit in the long run from such investments.

It has become increasingly clear that renewable energy technology will dominate power capacity build-out over the rest of this century. 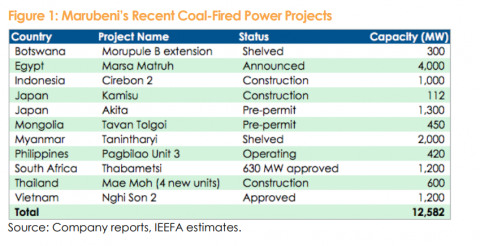 Senior members of the Japanese government are now emphasizing how the nation’s support for coal-fired power build-out domestically and overseas is failing to meet increasing global expectations for action on carbon emissions. Japanese banks and investors are seriously considering joining global financial institutions in turning away from the coal industry as it makes increasingly less financial sense to support it in the wake of the massive technological disruption caused by cheap renewable energy.

Marubeni’s Power Business & Plant Group was the single largest contributor to overall net profit for the year to 31 March 2018. The company is exposed to an overall reduction in profitability if the returns from this business unit decline.

With innovation central to its management philosophy, Marubeni—to its credit—recognizes that major transitions require companies to be prepared to abandon old approaches that no longer make business sense going forward.

As the company state in its 2017 annual report:

“We will decisively divest assets that lack a clear strategic rationale and strategically exit businesses that are past their prime.”

This report finds that Marubeni has reached an energy crossroads; the company is deeply involved in coal-fired power and renewable energy projects both domestically and overseas, yet only the latter has a sustainable and growing future.

Marubeni’s own shareholders, too, will be increasingly concerned about the risk of continuing in the coal-fired power sector as the transition toward renewable energy continues globally. Power utilities such as Engie, RWE and E.On, which made their move away from coal late and as a result suffered sustained shareholder value destruction, have since reinforced their planned transition to renewables and heavily restructured their businesses. Companies in the coal-fired power equipment sector, such as GE, Siemens and Mitsubishi Heavy Industries, have suffered similar declines in shareholder value as orders dry up. These companies are now faced with the need to realign their businesses to better suit the energy markets of the future in order to avoid further shareholder value destruction.

Fortunately, the company is already operating in the renewables space globally and has gained experience that can enable its Power Business & Plant Group to flourish if the company fully commits to transition. Marubeni’s Chairman, Teruo Asada, has previously called for the Japanese government to encourage domestic renewable energy investment, and the company has clearly acknowledged the opportunities that transition can offer:

Meanwhile, momentum around renewable energy has increased the attractiveness of the sector, as can be seen in several developments:

Japan is home already to a number of clean-energy champions that include Panasonic, SoftBank, and MHI Vestas. Other Japanese trading houses are increasingly active in renewable energy.

Marubeni’s renewables experience positions it to join this group and become recognised as a global clean energy leader. To succeed in this, it will need to abandon its strategically challenged coal-fired power development business.