India installed a record 10 gigawatts (GW) of solar electricity capacity in fiscal year 2017-2018, twice the rate logged in the previous year, and nearly double the country’s entire solar base. The gains put India at 22 GW of total cumulative capacity—and the trend is continuing.

Cost deflation is likely to remain a medium-term trend as economies of scale are achieved, spurred in part by India’s development of the world’s largest solar project, the 2.2-GW Bhadla project in Rajasthan that is set to come online in 2019.

The 10 GW of solar installed in 2017/18 represents most of the 12.1 GW of new renewable capacity commissioned over the past 12 months. Renewables now account for 20% of total installed capacity in India and 7.7% of electricity generation.

While the surge in new renewable generation has increased concerns about grid constraints, the right level of ongoing investment will make those issues manageable even as renewable energy installs double to more than 20 GW annually by 2020. 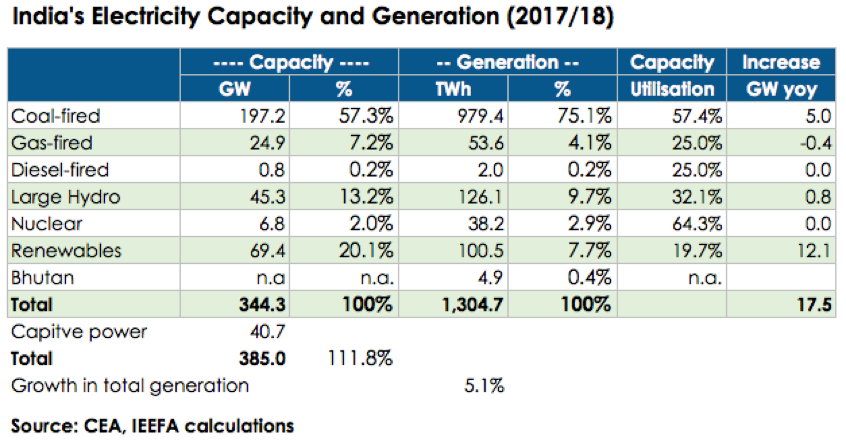 The latest indication of the government’s renewable commitment came from India’s Energy Minister R.K. Singh, who has established a clear target for 40 GW of solar tenders in 2018 alone. As part of this policy goal, the minister announced the government’s intent to seek an additional 20 GW of solar tenders tied to the condition that successful bidders have production capacity in India sufficient to deliver half the equipment required. This is entirely consistent with Modi’s “Make in India” vision, and likely will withstand scrutiny by the World Trade Organization.

THE FASTER THAT INDIA INVESTS IN RENEWABLES  infrastructure the faster it can decarbonize its economy, but without the proper alignment of investment and domestic employment, the government will face political resistance to the upfront US$300 billion investment required over the coming decade.

A growing national acceptance of the inevitability of power market transformation.

The Maharashtra State Electricity Distribution Company also solicited expressions of interest last month for 1 GW of floating solar on the Ujjani Dam reservoir in the Solapur district of Maharashtra. This builds on the Energy Ministry’s December 2017 announcement that it was aiming for 10 GW of floating solar within three years.

Even as India is moving to fully commission the world’s largest operational industrial solar park in Rajasthan by 2019, Vijay Rupani, the Chief Minister of Gujarat State, announced plans last month for a 5-GW industrial solar park spread across 11,000 hectares (27,000 acres) of land along the Gulf of Khambhat in the Dholera Special Investment Region.

Ironically, Gujarat followed this announcement with cancellation of a 500-megawatt (MW) solar tender as “too expensive” at Rs2.98-3.06/kWh (US$45/megawatt hour (MWh)), even though that number is well below the average wholesale price of domestic thermal power generation. The winning bids were 10% higher than the solar auction of September 2017 due to a combination of higher module prices, the risk of import tariffs and rising bond rates.

That said, recent wind tenders have come in at prices similar to the record lows set in 2017, and IEEFA is confident that with China’s massive solar manufacturing capacity expansion well under way, module prices and hence solar tariffs will resume their decade-long deflationary trend as 2018 progresses.

IN YET ANOTHER FIRST FOR INIDA, HERO FUTURE ENERGIES has co-located a 50-MW wind farm with a 29-MW solar project to fully leverage its 50-MW grid-connection investment and start the process of addressing variable renewable energy generation by applying a hybrid model that takes advantage of existing approvals. Adding a small amount of storage will provide peaking capacity plus grid- and frequency-regulation services.

The Ministry of New and Renewable Energy’s (MNRE) draft hybrid-generation policy includes a target of 10 GW by 2022 for such wind-solar-battery projects. Building on this policy, the state of Andhra Pradesh has released a draft document outlining its plans for 3 GW of wind and solar hybrid projects by 2019/20 with an initial tender involving 120 MW of solar, 40 MW of wind and 20-40 MWh.

Finally, in what may be a global first, NTPC Ltd. is planning an auction for 2 GW of new wind and solar projects with the object of blending renewable electricity generation into its existing coal-fired power generation power purchase agreements, noting that the renewable energy tariffs achieved in 2017 were cheaper than 92% of all thermal power plant produced electricity in India.

NTPC has offered to share the fuel savings with the relevant discoms, providing NTPC with enhanced overall returns and consumers with progressively lower-cost electricity. NTPC already has some of the lowest-cost and highest-utilization coal plants in India, such that it generates one of the higher returns on investment despite low average wholesale tariffs.

NTPC clearly is looking to minimize its stranded-asset risk while accelerating the integration of renewable energy generating capacity—a win for NTPC shareholders, the government, electricity consumers, discoms and the environment.

The only obvious losers are high-cost thermal power plants, particularly ones running on imported thermal coal. The recent, partial cessation of generation at Adani’s Mundra and Udupi import power plants illustrates this perfectly.

These announcements, all coming over just the past month, illustrate the growing acceptance in India of the inevitability of electricity market transformation. India’s forward-looking, renewables-heavy policies will improve energy security, progressively facilitate deflationary tariffs and start to address the rising air, emissions and water pollution pressures clearly evident across the country.

IEEFA Update: Tamil Nadu Is on a Renewables Roll

IEEFA Update: A Tipping Point Is Coming, and Fast