Opponents of renewable energy have sought to use the variability inherent in wind and solar electricity generation to campaign against the ongoing integration of such resources into the U.S. electric grid.

Integration is already being done on a massive scale, and without ill effects.

Variability was the straw man, for instance, in U.S. Energy Secretary Rick Perry’s failed bid this past winter to secure Federal Energy Regulatory Commission support for a costly coal and nuclear bailout. FERC unanimously voted Perry down in favor of free markets. Perry couched his scheme in terms of reliability, a refrain that evidently has legs. The coal industry is repeating it on other fronts, including with public utility commissions and grid operators. A new bill in Congress would provide a tax credit to keep dying coal plants alive.

The fact is, the integration of variable generation is already being done on a massive scale, and without ill effects. Indeed solar and wind only add resilience to electricity grids while providing additional national energy-security benefits.

Gerard Wynn, an IEEFA energy analyst, points to nine examples now of countries or regions that use wind and solar to supply at least 14 percent of their electricity needs. Two of those examples, Denmark and South Australia, report solar and wind generation levels of 53 percent and 48 percent, respectively. Equally important, as Wynn noted during IEEFA’s annual conference last week in New York, is that these high levels of variable generation integration have been achieved with no degradation in power supply or reliability (Wynn is the author of an IEEFA report published in February on how electricity markets that include California, Ireland, Germany, Spain, Texas, Uruguay, and the Indian state of Tamil Nadu have used a variety of innovative measures to successfully integrate solar and wind resources). 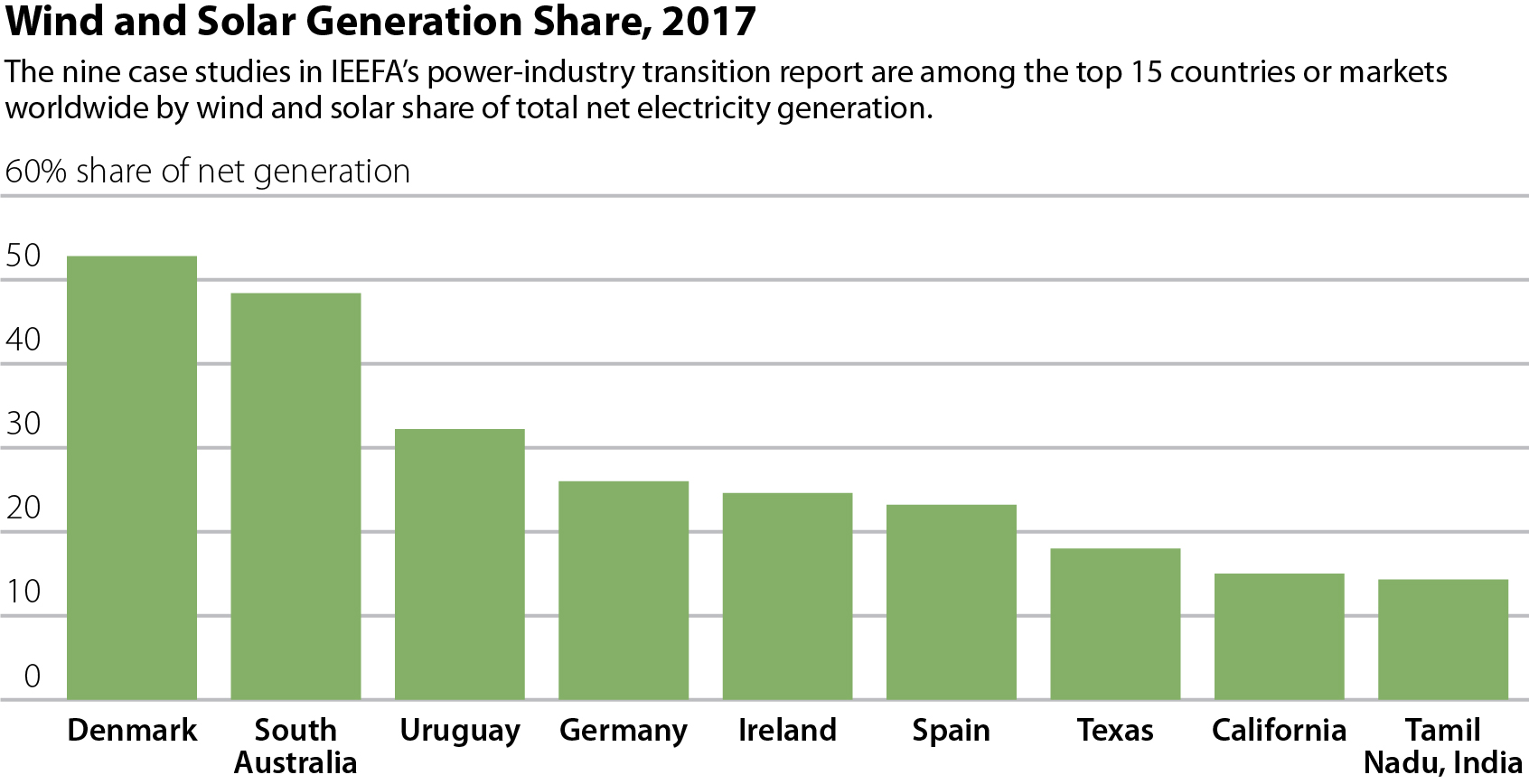 THE SOUTHWEST POWER POOL, WHICH IS THE GRID OPERATOR for a huge swath of the U.S. that includes the bulk of five states plus parts of nine others, makes news frequently for its growing reliance on wind-power electricity. This past Friday, the power pool set a wind-penetration record of 60.56 percent, which is to say that it met almost two-thirds of its customer demand with wind-generated power.

The Daily Oklahoman newspaper included this passage in its article on the milestone: “Jim Roth, a former Oklahoma Corporation Commissioner, filled a seat on the commission just as wind development was getting started. Roth said Friday the penetration record confirms to him that wind is achieving reliability and affordability standards.”

And just yesterday, Platts reported that as the Southwest Power Pool logs record wind-generation moments, this year it has met almost 30 percent of demand with wind, an increase from 23.3 percent in 2017.

Eric Gimon, a California specialist with Energy Innovation, responded at the IEEFA conference to one oft-raised question about integrating high levels of renewables: how to provide frequency regulation. He pointed to a recent successful demonstration project that involved First Solar, the National Renewable Energy Laboratory and the California Independent System Operator, which showed that solar can provide essential reliability services.

The issue is not whether solar can meet market needs, Gimon said, but whether market rules and price signals can be structured to allow for solar to participate fully in grid operations.

Similarly, Warren Lasher, senior director of system planning for the Electric Reliability Council of Texas (ERCOT), told the conference that Texas already has integrated more than 20,000 megawatts of wind power into its grid, with an additional 5,000 megawatts likely to come online by 2020.

Lasher also said ERCOT, one of the biggest grid operators in America, is now planning for a significant increase in the amount of solar photovoltaic output, which is expected to more than double over the next two years,  from 1,000 to almost 2,500 megawatts.

His main concern, Lasher said, is not renewable integration, but rather making sure that the state has enough capacity in general to keep up with rising demand. Coal-fired closures, spurred largely by cheap natural gas, coupled with rising statewide demand are expected to push ERCOT’s reserve margins down to around 10 percent, he said, putting the state “in a somewhat precarious position going into the summer.”

Still, that issue is separate from the question of integrating renewables. To that end, Lasher generally echoed Gimon’s assertion that complex technical issues will arise as the amount of installed renewable capacity on the grid rises. But while complex, these issues are not insurmountable, Lasher concluded.