LONDON—Uruguay is closing in on the world leader in wind and solar power by market share, Denmark, showing how the right grid conditions can help renewables sweep aside fossil fuel-fired electricity generation.

We published a report less than a year ago noting that Uruguay was probably the world’s fastest growing variable renewables market, with wind and solar power reaching 32% of total generation in 2017 compared with 1% in 2013.

The small Latin American country is now nearing the market share of world leader Denmark. During seven of the first eight months of the year, wind and solar generation in Uruguay exceeded 40% of total generation. Denmark reached a corresponding value in six of those months.

Denmark has higher peaks of variable renewables market share, with levels in the summer having topped 70% in the past three years, but it also has deeper troughs during periods of higher electricity demand in the winter (see Figure 1 below).

In Uruguay, according to the latest available data (January through August), wind and solar  reached 43% market share, up 12 percentage points on the same period last year. Denmark has reached 49% of net generation, down two and a half percentage points as a result of a less windy year so far.

It’s no coincidence that Uruguay is managing such rapid wind and solar growth, with useful network conditions favouring the integration of variable generation.

Uruguay also has a large amount of installed hydropower capacity, the perfect complement to variable renewable generation because of its flexibility.

But these are not essential conditions for variable renewables growth. Countries can increase the flexibility of their domestic generation in other ways, depending on natural resources and infrastructure. Denmark, for one, has achieved domestic flexibility by coupling national heat and power demand through a network of co-generation combined heat and power units.

As Uruguay’s wind and solar production has climbed, output from the country’s domestic oil-fired generation and hydropower have dropped. The country has thus achieved its main goals, to reduce dependence on oil and electricity imports, and to be better prepared for dry years. 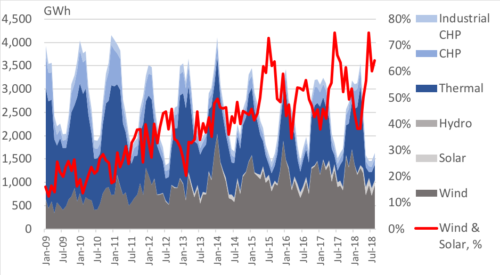 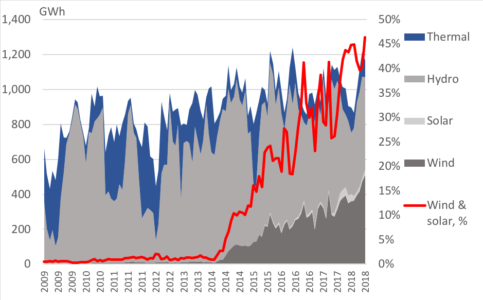