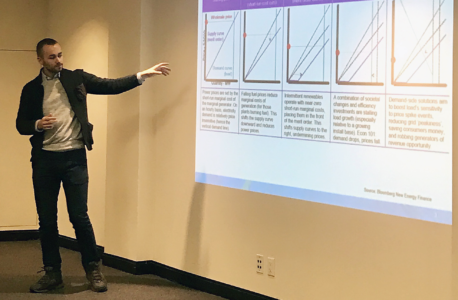 Nick Steckler of Bloomberg New Energy Finance: Wind is on the rise.

Sheldon Stone, a partner at Amherst Partners in Detroit who specializes in bankruptcy cases, said bankruptcy-recovery plans filed by the likes of Peabody Energy and Alpha Natural Resources will in all likelihood fail.

“Nobody wants their names attached to these plans,” said Stone, who dismissed the proposals as deeply impractical and rooted fundamentally in questionable assumptions.

He noted that Peabody, for instance, projects that it will mine more from its Powder River Basin holdings by 2021 than the total amount projected by the Energy Information Administration for all producers in the region.

He said Peabody’s projection that it will increase its market share is akin to pulling a rabbit out of a hat and for the company to make the gains it promises may require selling coal at below-market prices.

Stone added that Peabody, which is to officially emerge from bankruptcy this week, is a beneficiary of an over-politicized bankruptcy system that favors the status quo.

“Large established professional firms have too much of a say,” Stone said.

He and other panel members noted that Peabody’s largest U.S. customer is the Navajo Generating Station in northern Arizona, which is slated for closure in 2019.

The panel agreed also on the bleak outlook for U.S. coal producers in general.

Dan Cohn, a staff member of the Western Organization of Resource Councils, pointed out that Peabody has kept its self-bonding options open, and said the company will likely abuse them again.

EUROPEAN ELECTRICITY MARKETS ARE IN TRANSITION, nowhere more so than in the U.K., where coal usage fell by 60 percent last year and where renewables are making gains, said Gerard Wynn, an IEEFA London-based energy finance consultant.

“U.K. is moving quickly from coal and gas to wind,” Wynn said. “You can increase renewables on the system quite dramatically without capacity markets.”

Tom Murley, chairman and senior advisor to HgCapital’s Renewable Power Partners’ funds, said market change is being driven in part by customer preference: “We live in a time of energy-consumption choices, and consumers want clean energy.”

And he said corporations that include Amazon, Dow Chemical, Google, GM, IKEA and Walmart Amazon are pushing for clean energy and in some cases are now producing their own electricity.

Murley said utilities face an existential crisis, and that most of the sector doesn’t know how to adapt.

“But they won’t go down without a fight,” he said.

IEEFA Report: A U.K. Electricity Transformation Under Way, But in Need of Better Direction