IEEFA Australia: It was a gas while it lasted but the love affair is over

In Victoria in particular, global and domestic factors point to gas becoming a fuel of the past.

A proposed LNG import terminal for Victoria would be a retrograde step for economic and environmental reasons.

Victoria has had a long and enduring love affair with gas.

Fossil gas has been used to heat Victorian homes and cook meals since the days when the Bass Strait produced a cheap and plentiful supply. And the State is currently assessing whether it will be the first in Australia to approve an expensive LNG import terminal at Crib Point, in Westernport Bay.

That love affair is soon to end however, and the source of that breakup is both international and local.

THE GAS INDUSTRY IN AUSTRALIA IS DOMINATED BY EXPORTS and our largest customers are first Japan, then China, and South Korea. All three are adapting to the energy transition much faster than Australia.

Japan and South Korea have undertaken to reach net-zero emissions by 2050 and China by 2060. Put simply, net zero means that our major export markets will burn significantly less of everything, including gas, to reach their target. According to the International Energy Agency, primary energy demand falls 17% by 2030 under ‘net zero by 2050’ policies.

The implications of not just our major gas customers going net zero but Europe and, post the election, the U.S. going net zero, are profound. It is likely that Australia will soon face carbon tariffs from a world more committed to lowering fossil fuel usage than we are.

Gas is a declining industry in Australia

Although Australia has no supply shortfall (remember most of our gas is exported), the declining demand for our gas in Asia will free up substantial capacity to easily satisfy our small domestic market.

Gas is a declining industry in Australia with gas usage falling 21% since 2014 and gas usage for gas powered generation a whopping 58%. Gas is simply too expensive to use to generate electricity except at periods of peak demand when electricity prices are high.

The Grattan Institute, which counts BHP, the Federal Government and Woodside (Australia’s largest LNG producer) as supporters, released a report yesterday colourfully titled “Flame Out – the Future of Natural Gas.” As the title suggests, its analysis was not backward in coming forward:

“The only rational approach, for governments, the energy industry, and its customers, is to begin planning for a future without natural gas, or at least with a substantially reduced role for natural gas.”

As Australian politics surrounding climate and energy has seen constant upheaval, the individual states quietly got on with achieving their ambitions for net zero.

VICTORIA RECENTLY ANNOUNCED A BIG BATTERY PROJECT, to be quickly followed by AGL announcing one in South Australia. AGL’s battery has four hours of storage, which is one big battery! AGL now sees batteries as competitive with gas generators to meet peak demand periods.

In Victoria the dominant use of gas, accounting for 60% of consumption, is in the home and commercial premises.

AGL, a company synonymous with gas, now says it is cheaper to heat your home and hot water with more efficient air conditioners and heat pumps. The AGL website also states that heat pumps are safer for Victorians to use:

“With heat pumps, you don’t need to worry about house fires or filling your home with dangerous fumes, unlike some gas heaters.”

To save money and improve safety, a home can switch to an induction cooktop and get off gas entirely, a solution the Victorian government should really canvass if its serious about its net-zero commitment. 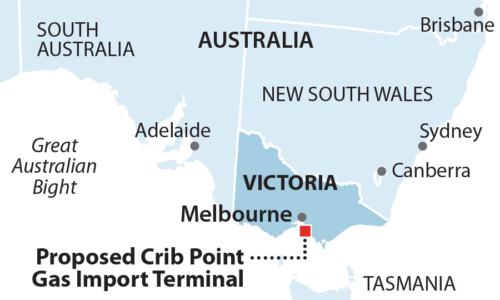 Against this background of declining gas usage and poor economics of gas as a fuel source, the government is confusingly considering an import terminal at Crib Point. Importing gas into Victoria is a very expensive way to supply domestic consumers as the gas has to go through the expensive liquefaction and shipping processes.

LNG is also extremely emissions intensive with about 13% of the gas being burnt just to super cool the gas down to -160 degrees and ship the cooled product.

Any new infrastructure that encourages the burning of more gas, which is predominantly methane, is entirely inconsistent with Victoria’s pledges of net-zero emissions. And yet this is what the government is contemplating.

The import terminal is proposed to cater for a perceived looming shortfall of gas in Victoria, an out-of-date concept given the forthcoming declines in our export markets.

Rather than embedding gas an expensive fuel source in the Victorian economy, the government could look to ceasing approval of new domestic gas connections, as is currently happening in various states in the U.S. It could also introduce modest incentives to encourage fuel switching to cheaper and more efficient electricity in the home.

Embedding a fuel of the past into the energy system of the future is a retrograde step. Victoria can and should move on from gas.

The love affair is over.

This commentary first appeared in The Age.