Several of the 16 coal power plants in Australia's National Electricity Market will be financially unviable and at least one is likely to face closure several years sooner than planned due to coal plants' poor flexibility and inability to adapt to a rapid influx of renewable energy.

A huge amount of renewable energy supply is expected to be added to the National Electricity Market.

The combination of renewable supply displacing output from coal and gas plants, as well as reducing prices, will lead to a huge reduction in revenue for these generators.

Coal-fired power stations in Australia’s National Electricity Market (NEM) will confront grave financial difficulties within the next 5 years due to extra competition from a large influx of renewable energy supply. The analysis detailed in this report suggests that the financial viability of several coal generators in the NEM will become severely compromised by 2025 such that closure becomes an attractive or even unavoidable choice for at least one power plant owner.

The additional renewable energy generation coming online from 2018 to 2025 will be enough to supply 99.9% of the Australian Energy Market Operator’s (AEMO) expected demand growth and 98% of the gap expected to be left from the Liddell power station retirement. Even after filling the demand growth and Liddell gap there will be surplus renewable generation of approximately 57,000GWh.

Coal and gas generators will be displaced in the wholesale market

As a result, coal and gas generators will be displaced in the wholesale market, due to the merit order effect. Renewable generators have extremely low operating costs (economically defined as short run marginal cost or SRMC) largely due to having no fuel costs (as wind and solar resources are free). Renewable generators can therefore bid into the market at prices close to zero, undercutting other generators on price. Increasing amounts of renewable installations therefore reduce the output of other generators with higher operating costs. We expect around three-quarters of gas generation and one-quarter of coal-generation to be replaced by renewable energy generation in the seven year period.

The incoming renewables will also have a deflationary impact on wholesale electricity prices, further decreasing the profitability of existing plants. Coal plants will see a double hit to their electricity sales: both volume and price is forecast to decrease out to 2025. The considerable reduction in coal generation and wholesale electricity prices is expected to drive reduction in coal plant wholesale spot market earnings (Earnings Before Interest and Taxes or EBIT). Coal plants could suffer an estimated EBIT reduction of up to 119% comparing 2018 to 2025.

In a scenario where prices in 2025 are the same as NEM-wide 2020 prices (Scenario A in our study), Eraring, Mt Piper and Vales Point B would be expected to be losing money. In a scenario where price reduces down below 2015 prices (Scenario B), Eraring, Mt Piper, Vales Point B, Gladstone and Yallourn W be making a loss. This is based on EBIT estimations in the case that the generators are, theoretically, fully spot market exposed (i.e. does not include contracts) and excludes revenue from other services such as FCAS. 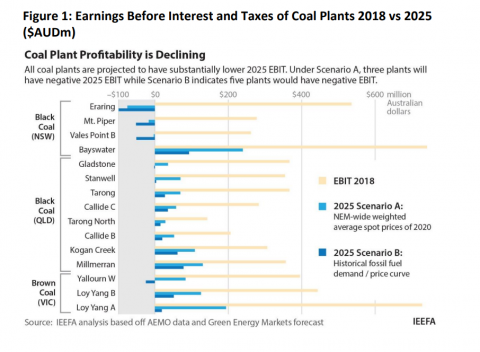 Electricity sector investors are recognising that the plunging cost of solar

Electricity sector investors are recognising that the plunging cost of solar, its rapid speed to deploy, and its vast popularity with investors and Australian householders has led to an irrevocable change in the shape of the electricity supply-demand curve and market that leaves inflexible and high fixed cost baseload coal plants ill-suited to the future grid.

Unfortunately for investors in coal plants, while there remains plenty of evening demand after the sun sets, the amount of daytime demand is becoming so small that coal plants are left in a battle amongst each other to remain online. This is a serious problem for aging coal plants because once they switch off, it typically takes several hours to start back up again and then several more hours to be capable of reaching full output, and by then the evening peak demand window of opportunity has passed. In addition, such modes of operation place considerable stress on the components of a coal plant, increasing maintenance costs and reducing their life.

Other dispatchable power plant technologies are much better suited to this new future, dominated by solar and wind, because they can ramp their output up and down more quickly and with less stress on their components.

Given this context, the New South Wales Government’s Electricity Infrastructure Roadmap (2020) provides an essential and timely response to ensure coal plant capacity is replaced in advance of their exit.

Supporting the findings in our report are that several energy market corporations have already substantially written-down the value of their generation assets or cancelled upgrade plans, as announced over February 2021:

This report has chosen to focus its analysis on coal plant profitability, as exit of coal plants has substantial implications for energy security, price and emissions outcomes but gas power plants will also suffer substantial deterioration in profits (exacerbated by recent dramatic hikes in gas prices). Yet this is partly mitigated by the fact that gas power plants tend to have lower fixed costs and much greater ability to ramp output up and down quickly. Peaking gas will thus play a role into the future, however the high short run marginal cost compared to renewables and batteries is likely to drive significant reduction in gas generation.

Energy storage technologies such as batteries or pumped hydro have a feature that gas does not possess; they can take advantage of periods of plentiful sun or wind to replenish their storages at very low cost. This is in addition to having significantly faster ramping capabilities than gas plants, let alone coal power plants. Furthermore, for short peaks in demand batteries are already the lowest cost option for providing dispatchable capacity. It is expected batteries will play a growing role into the future due to ongoing technology improvements that have been characterised by double-digit percentage annual cost reductions.

These physical and economic realities mean that efforts to keep inflexible coal plants afloat, let alone build new plants, are likely to be counter-productive in terms of both energy affordability and reliability as well as being contrary to both Federal and State Government’s commitments to address climate risk.

Rather than seeking to delay or even deny the inevitable exit of coal, governments, as well as investors, need to be planning to replace them.