Planned new solar construction in the southeast U.S. will add momentum to the energy transition and likely lead to the zeroing out of all coal generation in a number of states in the near future.

Coal-fired capacity in Florida will continue to be retired, bringing the total down to roughly 4,000MW. Similarly, coal, which accounted for 63% of Georgia’s total electric generation, now produces just 25%.

Solar has climbed from essentially zero to 5% in 2018 in Noth Carolina—the only Southeast state to derive that much from solar.

Historically, the U.S. Southeast has been a stronghold for coal-fired electricity generation. That is no longer the case.

The ready availability of low-cost natural gas has led to a freefall in coal generation across the region over the past 10 years that has outpaced even the national drop in coal-fired generation. This, despite the fact that the area is home to companies such as the Tennessee Valley Authority, Southern Company and Duke Energy—three of the traditionally most coal-reliant utilities in the country. The decline is also noteworthy because the region’s utilities are still vertically integrated—controlling generation and transmission—and thus largely shielded from economic pressures like those in fast-changing markets like Texas and the PJM Interconnection, where more competitive generation resources often have an easier route to the market. 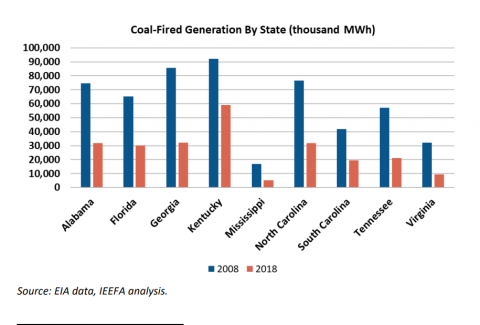 The scope of the collapse is evident in the following graphic, which shows significant decline in each of the nine Southeastern states examined in this report. Even Kentucky, which in 2008 relied on coal for almost 94% of its electricity generation, has seen a significant decrease.

This is just the opening act in what is essentially a two-stage transition that will further erode coal’s generation market share in the region over the next five years and beyond—a trend that in several of the states affected could lead to the zeroing out of coal generation. The second act will be driven by solar, which, while still a modest contributor to regional electric output, is poised to grow substantially through the 2020s.

The region has 13.1 gigawatts of installed solar capacity, according to the Solar Energy Industries Association (SEIA), and more than two-thirds of that total is in just two states, North Carolina and Florida. But significant growth is on the horizon. SEIA sees an additional 21.5GW of solar coming online in the region by 2024, an outlook that may be already out-of-date given recent utility and state announcements that are likely to expand the total.

This report—in addition to exploring the impact of the regional solar surge— examines state-specific developments that continue to undercut coal generation, such as the expected completion of Georgia Power’s two new nuclear units, the corporate push for renewable energy development in Virginia and other states, and the push by NextEra Energy subsidiary Florida Power and Light to become the nation’s leading solar utility.

The future for coal in the region is one of continuing decline, if not complete obsolescence.

Press release: Coal plants in the PJM region are a losing bet for private equity investors