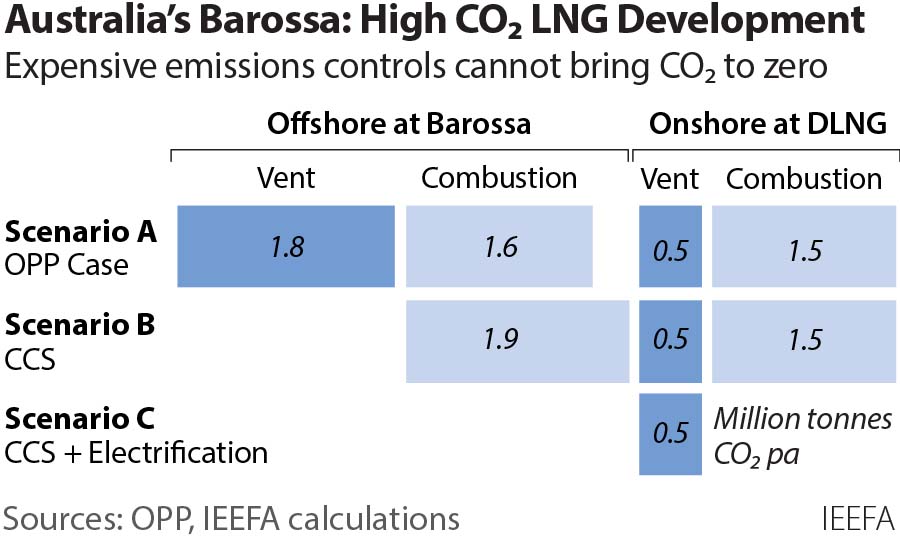 20 October 2021 (IEEFA Australia): Even if it employed carbon capture and storage, Barossa gas will continue to release financially risky carbon dioxide emissions onsite, onshore and across the supply chain, making it one of the more expensive and dirtiest gas projects in the world, finds a new report from the Institute for Energy Economics and Financial Analysis (IEEFA). 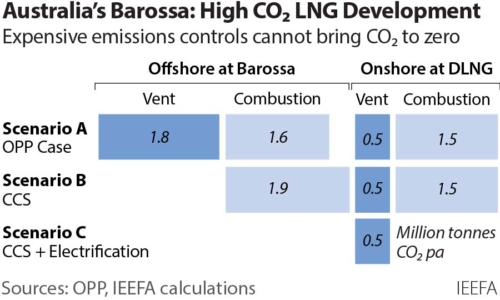 Santos recently suggested it would reduce the high emissions of its Barossa gas found some 300kms north of Darwin in the Northern Territory, Australia, by injecting captured carbon dioxide (CO2) into its nearly depleted Bayu-Undan gas field in the Timor Sea.

IEEFA’s new report reviews this strategy against the original scope of the Barossa project and concludes that investing in unproven and economically unfeasible carbon capture technologies will not only delay the project and significantly increase project costs – polluting emissions will still be released into the climate across the LNG producing operation and supply chain, making the company’s net zero target simply ‘greenwash’.

Polluting emissions will still be released into the climate

“Barossa gas has an unusually high carbon dioxide content which makes the project possibly the dirtiest in the world,” says Robert.

“Whichever way you look at it, Santos’ proposed Barossa project is an emissions factory with an LNG by-product – there’s going to be more waste than product.”

Santos is reportedly unlikely to commit investment into CCS for Barossa until government-backed carbon credits ‘make it stack up economically’.

Robert goes one step further in his report, suggesting that instead of just making announcements to attract investors and subsidies, Santos should be required to show that it can implement the CCS scheme as part of the Barossa development and to demonstrate its satisfactory operation before commencing exports of Barossa gas as LNG.

The report notes the majority of the project’s emissions arise from combustion, and suitable capture processes are not economically feasible either on- or off-shore.

“The modifications and new infrastructure required – and yet to be approved – across the project development would be too costly and sure to delay the project beyond its planned 2025 start date.

“Both the product and the project itself is in need of being saved or abandoned.”

The International Energy Agency’s recently released Net Zero to 2050 roadmap clearly states there must be no new oil and gas projects globally from 2021 if the world is to have any chance of reducing rapidly increasing emissions and getting anywhere close to 1.5 degrees Celsius, with the world now on a 3-4 degree C trajectory.

“The Barossa project is clearly a lemon and a stranded asset in the making,” says Robert.

“The partner companies involved must rethink their backing of what Australian billionaire Dr Andrew Forrest has described as ‘an atrocious project’.

Read the report: How to Save The Barossa Project from Itself – Carbon Capture and Storage Will Not Help as Barossa Gas Is High-CO2 Gas