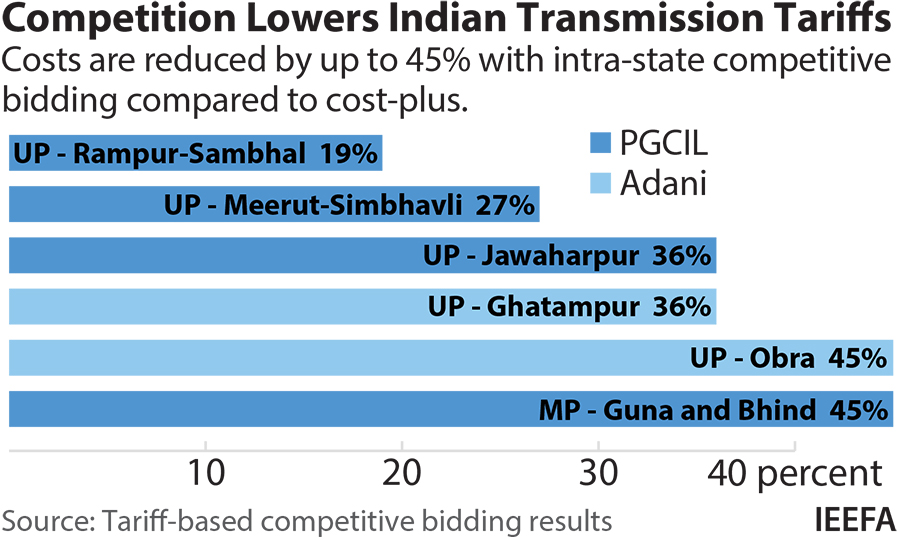 16 December 2020 (IEEFA India): A new IEEFA report recommends increasing competition in the development of intra-state transmission infrastructure, to speed up deployment of renewable energy in India.

“As the share of increasingly low cost but variable renewable energy grows, development of transmission systems must keep pace to meet demand and ensure efficient, reliable delivery of power to consumers,” says the report’s author Vibhuti Garg, Energy Economist at the Institute for Energy Economics and Financial Analysis (IEEFA).

Development of transmission systems must keep pace to meet demand

Most of India’s renewable energy generation capacity is connected to state transmission utilities (STUs) so the efficiency and reliability of intra-state transmission networks will be key for evacuation of power.

The introduction of competition can help to drive down construction costs, introduce new technologies and new ways of thinking and promote timely completion of projects, says Garg.

“More competition would not only benefit the private players but also increase focus by the state-owned utilities on the benefits to consumers who wear this cost.

“The private sector can also bring in increased capital at low cost for building transmission networks, leveraging record low global interest rates that are seeking low-risk, long-dated infrastructure returns. It would also free up state governments’ limited resources, which could be allocated to other social sectors like health or education for development.” Competitive bidding has also led to discovery of lower electricity tariffs. Analysis of projects that were out to bid reveals that competitive bidding resulted in an average tariff up to 45% lower than normative tariffs for certain projects, while the average reduction in project tariffs is ~35% compared to the cost-plus route under Central Electricity Regulatory Commission (CERC) norms.

“Projects secured without competition are not only likely to prove more expensive but are also more often delayed beyond the commissioning timelines,” says Garg.

“These delays, on account of various issues such as right of way, land acquisition and granting of forest clearances, result in capital cost overruns. Some cost overruns have been approved by State Electricity Regulatory Commissions, but others are being contested at various courts for settlement.”

Garg warns that lack of intra-state transmission infrastructure has created a bottleneck for renewable energy that will need to be addressed at scale to drive India to deliver on Prime Minister Narendra Modi’s ambitious 450GW of renewables by 2030 target.

“Renewable energy developers are building capacity faster than the transmission grid can keep up. Inadequate grid availability is a growing concern for developers in renewable-rich states. This is slowing down commissioning of new projects,” says Garg.

“Tamil Nadu, Karnataka, Gujarat and Rajasthan can look forward to moving from net electricity import states to net exporters of low cost, zero pollution, zero emissions electricity, but only with adequate transmission planning given the massive scale of renewable energy investment in planning.

“For optimal utilisation of the transmission network, distributed hybrid projects should be encouraged. This will also drive the transmission tariff down as the costs will be spread across larger flow of unit of energy, thereby reducing costs.

“But investment alone is not enough. We need to address the lack of development of intra-state transmission infrastructure through increasing competition from private players in the sector. This will assist absorption of low cost, domestic renewable energy generation without compromising grid security and stability.”