Federal blue hydrogen incentives: No reliable past, present or future 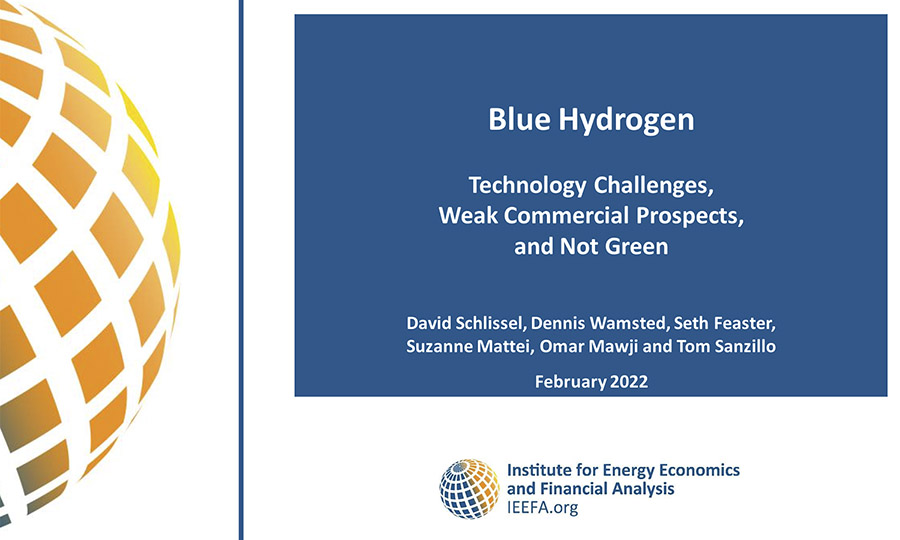 The Infrastructure Investment and Jobs Act propels the energy transition forward with proven technologies and promising innovations like renewable energy and storage technologies. But it also encourages the development of blue hydrogen, which stands on flimsy economic and environmental footing.

“Investors, state and federal officials need to ask a lot of questions. They need timely, complete data and analysis to make the right choices during this period of innovation and change,” said Suzanne Mattei, an IEEFA energy policy analyst. “But instead, they’re rushing off to spend billions of taxpayer dollars on unproven technologies rather than pursuing better options.”

“The federal government and some state governments are racing to finance carbon capture technologies. That is a mistake,” said David Schlissel, IEEFA’s director of resource planning analysis. “Decades of experiments and hard data show the technology has not been proven to capture 90% of the CO2 over the long term, which is what proponents claim it will do. Some research on how to decarbonize sectors of the economy is certainly warranted, but the best way to reduce the amount of CO2 pollution is to stop producing it. That means shutting down coal plants now and gas-fired plants as soon as possible—plus, moving directly to renewable energy, or green hydrogen produced from renewables if needed, and bypassing blue hydrogen.”

The analysis notes that the drilling and transport of natural gas releases large amounts of methane, a chemical that is challenging to control and many times more powerful than CO2 as a climate change agent.

Finally, it finds that blue hydrogen is a competitive laggard. By the time planned blue hydrogen projects become operational, most of the expected market for energy demand will have been taken over by renewable energy, electrification and green hydrogen. The shift will make blue hydrogen less attractive for private investors.

“Strong, consistent and profit-making technologies exist that build on innovation achievements, meet pollution-reduction objectives and are anti-inflationary,” said Dennis Wamsted, an IEEFA analyst and editor. “We hope to contribute to a critical dialogue on the energy future based on facts, not a mass of confusing promises.”

The analysis concludes that the questions looming over blue hydrogen should prompt developers, governmental organizations and investors to avoid blue hydrogen projects without doing further due diligence.

IEEFA’s briefing document is a clear summary of research results from limited blue hydrogen tests, decades of carbon capture experiments and a market outlook for innovation in the energy transition. For a deep dive, the briefing is supplemented with five briefing notes to stimulate ongoing dialogue.

Blue Hydrogen Has Weak Case When It Comes to Emission Reductions

Dennis Wamsted ([email protected] ) is an IEEFA analyst and editor