Why This Coal-Fired Electric Plant in Florida Should Be Closed 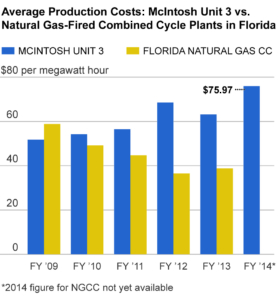 That’s the inescapable conclusion of a study we published this morning in which we examine the operational costs and performance of the 33-year-old coal-fired plant.

It’s not a pretty picture. Unit 3 is not competing very well with other sources of electricity generation, and it will require additional capital expenditures—in addition to the $70 million poured over the past few years into keeping it running—as time goes by. The amount of electricity it has generated has declined precipitously since 2008, largely as a result of its unreliable operations and from competition by less expensive plants in Florida.

Lakeland Electric and the Orlando Utilities Commission, which share ownership of Mcintosh Unit 3, would be doing their public a favor by taking it off line.

Such a move would not reduce regional electric-grid reliability. If the 364-megawatt unit were to go dark, Florida would still have more than enough generating capacity to serve projected system loads and to provide the 15 percent capacity reserve margin needed to allow for unexpected power plant outages and unanticipated high system loads.

Here are some additional takeaways from our report: