Two new Moapa Paiute utility-scale solar projects would be the biggest to date on tribal lands in the U.S. Both are supported by long-term PPAs with major utilities. Their construction follows the successful completion and operation of a 250MW solar farm that came online in March 2017.

The new projects, the 200MW Arrow Canyon Solar Project and the 300MW Southern Bighorn Solar Project, will come online in 2022 and 2023 and are part of an industry push to lock up long-term deals in the sun-rich Nevada desert as power companies nationally chase more utility-scale solar deals.

The Navajo Tribal Utility Authority, a branch of the Navajo Nation, embarked in 2014 on a modest but significant utility-scale solar initiative that includes the now-operational 55MW Kayenta Solar Facility in northeastern Arizona and a new 66MW project in the works called Red Mesa Tapaha Solar Resource in southeastern Utah.

Tribal lands of the Southwest U.S. are far and away the largest single repository of utility-scale solar potential, but development of these resources has moved at an almost-glacial pace. Indications are that a paradigm shift is at work, however, as tribal interests begin to partner with developers that bring tax-advantage incentives to the table and with utility companies driven by the low cost of utility-scale solar; state mandates also in some instances are helping propel the uptake of renewable energy. 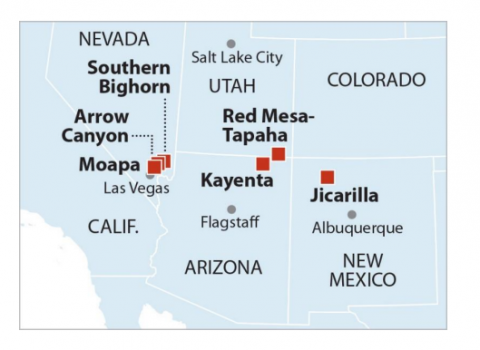 Three tribes are advancing the trend:

All the deals are tied to long-term power purchase agreements (PPAs) that run from 15 to 25 years, and pricing on the most recent ones—ranging from roughly $21-$23 per megawatt-hour (MWh)—shows why utility-scale solar has become so attractive. Gas- and coal-fired electricity generation, by comparison, are much more expensive, as noted in Lazard’s annual levelized cost of electricity data. In its 2018 report, Lazard put the cost of coal-fired generation nationally at $60-$143/MWh and gasfired generation at $41-$74/MWh. The unsubsidized cost for wind ranged from $29- $56/MWh, with the subsidized cost falling as low as $14/MWh. Lazard estimated the unsubsidized price of utility-scale solar at $36-$44/MWh, an estimate that now seems behind the times.