Over 2014-2021, Australian consumers were charged $10 billion more for electricity network services than necessary to ensure a reliable service.

Weaknesses in the regulatory system have allowed these excessively high returns or “supernormal profits” in favour of network shareholders, diverting funds that could have been invested in Australia's necessary energy transition.

Consumers are paying much more than necessary for safe and reliable electricity.

Total extra profit above normal levels, or “supernormal profit”, extracted by network businesses over 2014- 2021 was $10 billion.

Distribution and transmission network service providers in the National Electricity Market (NEM) are natural monopolies because it is not efficient to build multiple electricity networks alongside one another. To ensure that the networks do not exert monopoly pricing power, the AER regulates the prices networks charge consumers. The AER is responsible for making sure that networks charge consumers only what is required to cover the costs of investing in, building, maintaining and operating the networks, plus a reasonable profit to ensure compensation for investors.

In its Strategic Plan 2020-2025, the AER states its key objective regarding network regulation is to ensure that “consumers pay no more than necessary for the safe delivery of reliable electricity and gas network services”. The National Electricity Law’s revenue and pricing principles state that returns to shareholders should be “commensurate with the regulatory and commercial risks involved in providing” regulated network services.

Under incentive regulation, regulated networks have the opportunity to earn supernormal profits by exceeding expected efficiency improvements. However, productivity and performance improvements do not explain sector-wide supernormal profits over eight years, spanning almost two five-yearly price control periods. The reason for the supernormal profit was that the AER and the network businesses overestimated the costs that network businesses would require to build, operate and maintain the network. Networks charged those overestimated costs to consumers, and shareholders retained the differences between revenues and costs.

The supernormal profits issue needs to be examined and rectified. IEEFA has presented a range of recommendations in this report. If this situation is not improved, energy consumers will continue to pay more than required for electricity distribution and transmission network services.

NEM Networks Are Economically Regulated to Control Price to Consumers

Electricity networks are expensive businesses to run. In Australia, the economic regulation of electricity networks is undertaken by the AER. The AER regulates the amount networks can charge to consumers, under rules set by the Australian Energy Market Commission (AEMC).

The networks submit their expected future costs to the AER for its review. The AER makes revenue determinations allowing networks to recover future estimated efficient costs from consumers plus a return on capital invested (to ensure that investors in the networks are reasonably compensated). The total cost that networks can recover from consumers is the “regulated revenue”. The AER sets a regulated revenue for networks every five years, representing the total estimated amount that networks can charge consumers on their electricity bills for regulated network services.

The costs that the networks face, which determine the regulated revenue they can receive from consumers in the form of electricity network prices, include the following “building blocks”:

Estimates of future building block costs are adjusted for the cost of continued upgrades to and building of networks, subject to regulatory investment tests and AER review of regulated capital expenditure (capex) proposals.

Networks are also rewarded or penalised for productivity and quality performance through explicit “incentive schemes”. The cost or reward related to networks participating in incentive schemes is also added to, or subtracted from, the total allowed revenue for the given network business.

Equity shareholders in network businesses require adequate returns to incentivise them to invest. The AER determines a reasonable real return on equity for each network business (the “allowed” RROE), considering equity investor risk appetite and opportunity cost. This “allowed” RROE is included in the cost build-up for each network’s regulated revenue—that is, consumers pay for returns to equity shareholders through their electricity bills.

Networks Are Charging Consumers Too Much

As noted above, data released by the AER in July 2022 shows that the actual return to equity shareholders has significantly exceeded the allowed return level forecast by the AER over an extended period. Most network businesses are charging consumers significantly more than required to achieve their normal return and pocketing the difference in the form of additional returns.

To determine the profit the networks have made, IEEFA has converted AER inflation-adjusted RROE percentages data to dollar amounts using non-indexed regulated asset base data published by the AER. Applying a debt-to-equity ratio assumption of 60:40 (the only assumption in this analysis), supernormal profits can be determined from the difference between total costs (including normal profit) and total revenues.

If regulation were effective, then for the average network in the average year, costs and revenues should be more or less equal. However, IEEFA’s results demonstrate that actual regulated network revenue exceeded total regulated network costs by 10.8% during 2014-2021. This gap between cost and revenue is a supernormal profit extracted by networks—a charge for costs that do not exist.

In dollar figures, the supernormal profit over 2014-2021 was nearly $10 billion, or more than $1.2 billion annually. Of the 18 NSPs, 14 extracted supernormal profits above IEEFA’s expected profit multiple range. 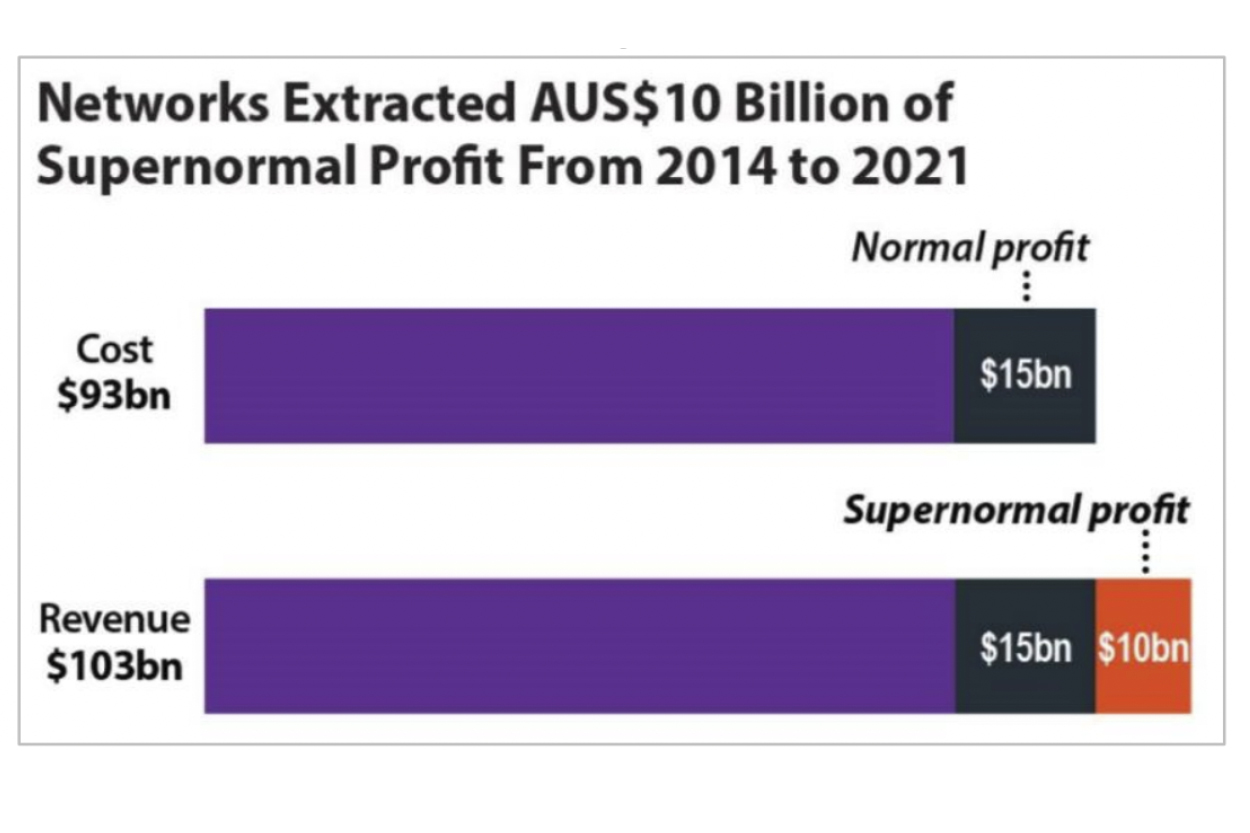 The data shows that economic regulation of electricity networks in most of Australia over the period 2014-2021 has consistently failed to prevent networks from setting prices well above their total costs.

The supernormal profits built up over eight years imposed an additional cost of between $800 to $1200 per customer, depending on the state. Of all NEM jurisdictions, only the Australian Capital Territory (ACT) has managed to constrain revenue close to costs. 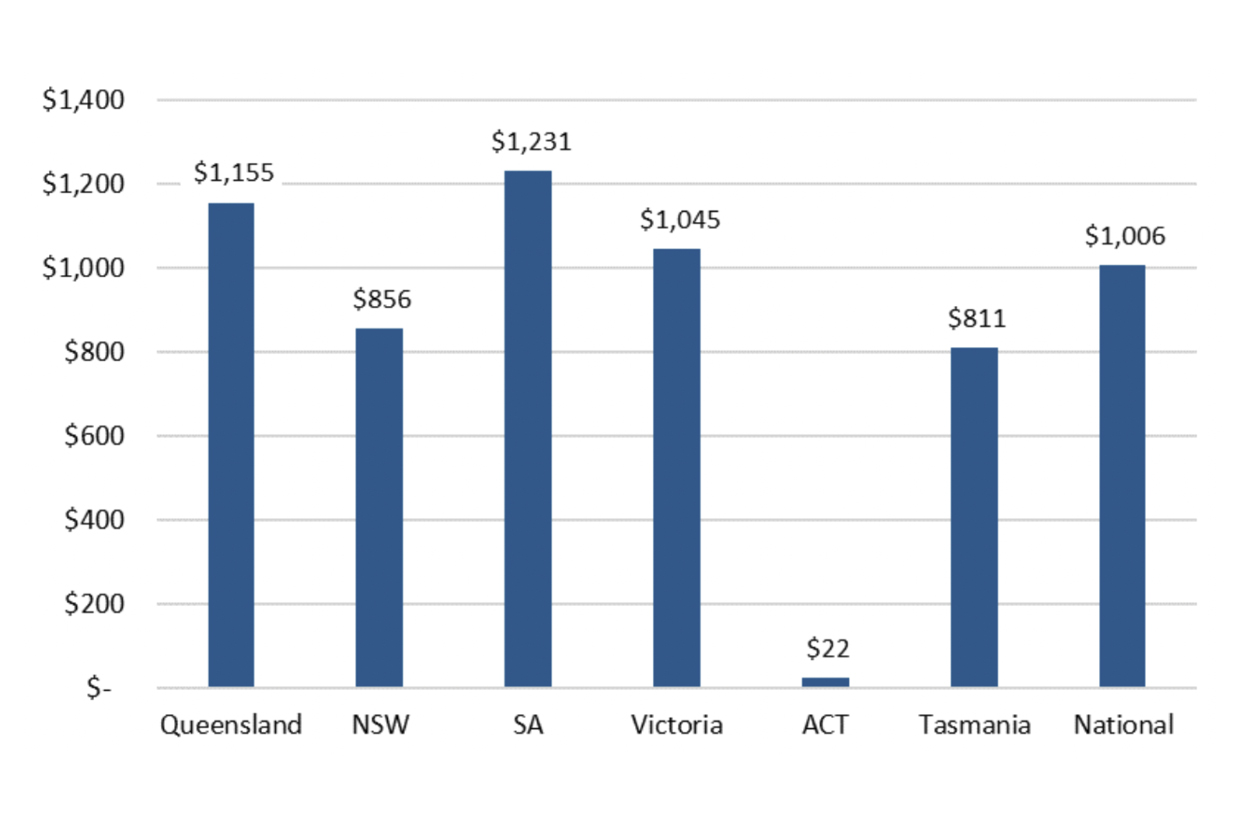 Source: AER data, IEEFA analysis. Note: Western Australia is not part of the National Electricity Market and is excluded from this analysis. AER data for the Northern Territory is not available for the entire period.

The following figure illustrates the extent to which retail bills have been inflated by total supernormal network profits, for each distribution network area, in percentage terms in 2020.

On average, across all networks, 6.8% was added to customers’ retail bills by network supernormal profits. The range was wide: from 0.2% for Essential Energy in New South Wales to 17.3% for United Energy in Victoria. 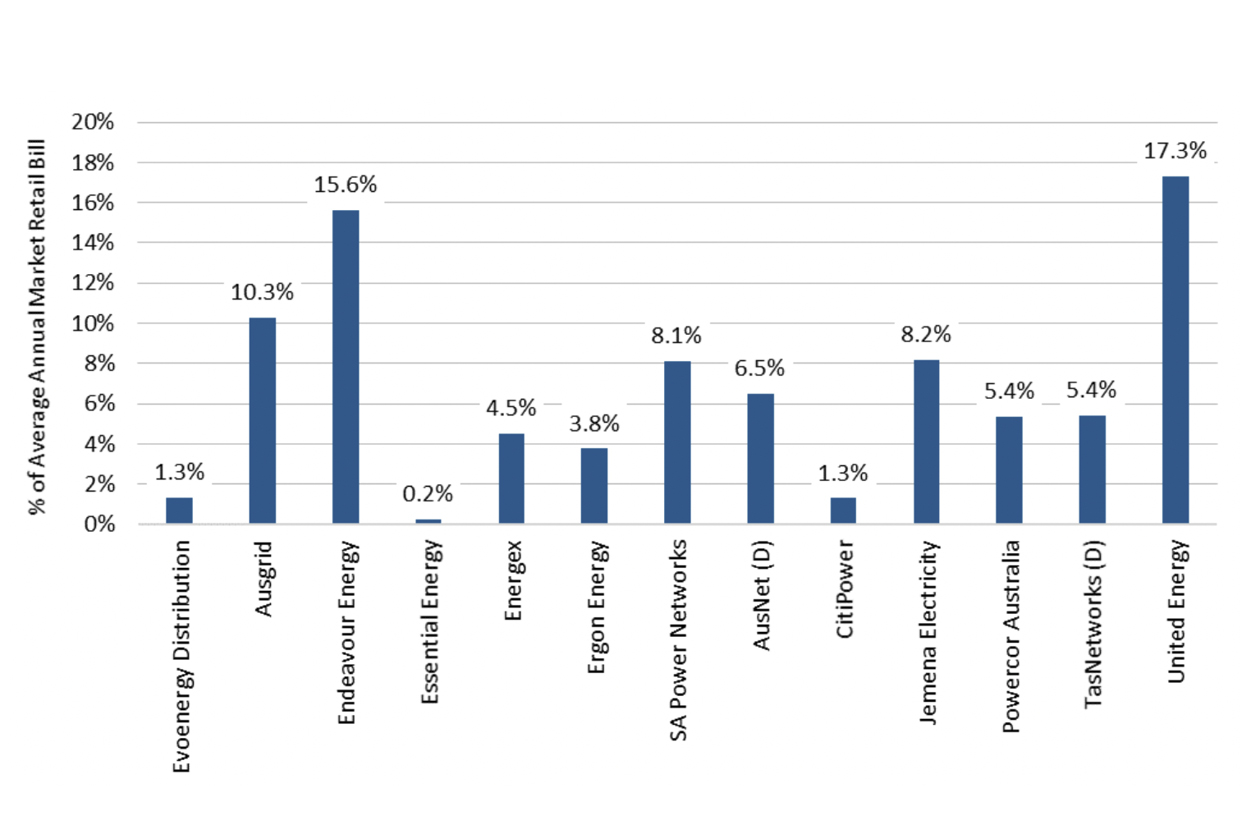 Profit Multiples Across Distribution and Transmission Networks by Year (actual profit as multiple of normal profit), 2014-2021 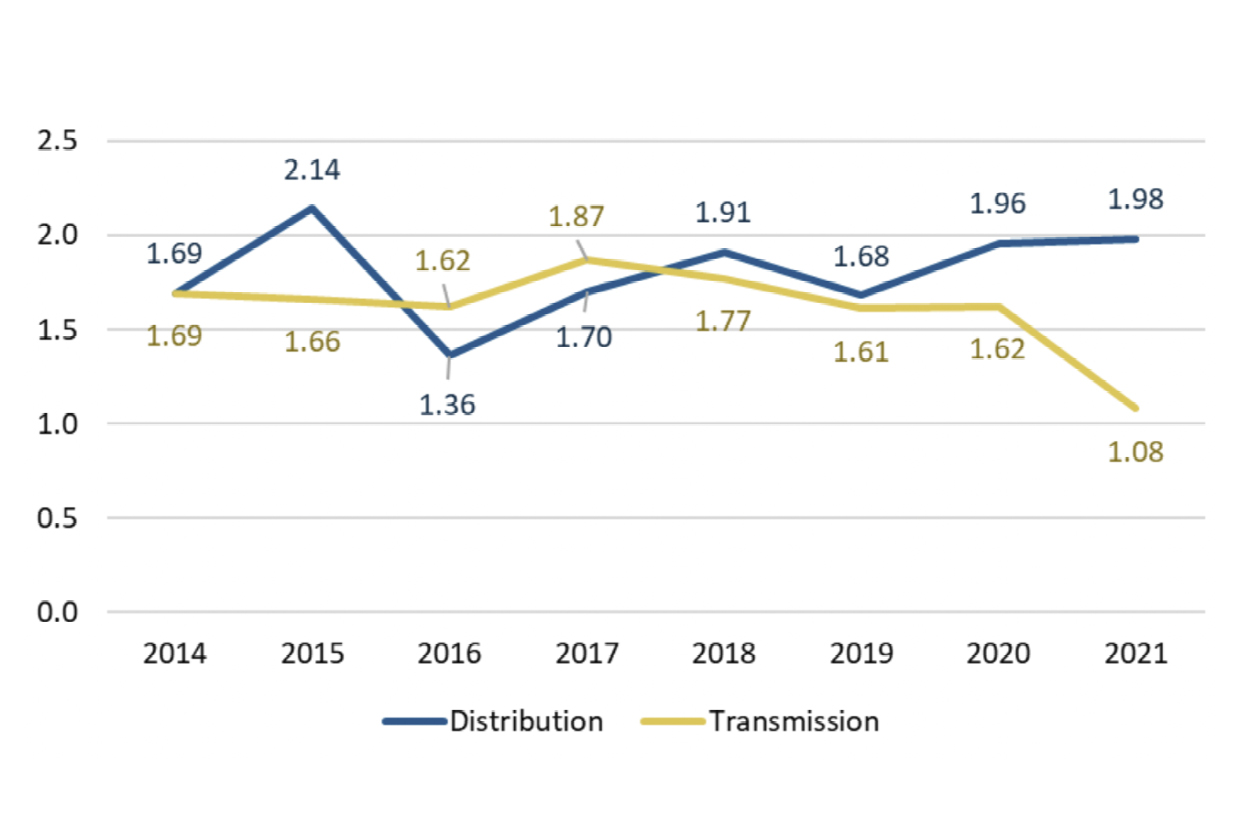 How Have Networks Been Able to Overcharge Consumers?

Networks have been able to overcharge consumers and extract supernormal profits, despite network prices being economically regulated by the AER. There has been an ongoing wealth transfer from Australian energy consumers to the owners of Australia’s energy networks, including overseas owners.

How did this happen when network prices are regulated? Actual network costs were persistently lower than the estimated costs used to set regulated prices, over 2014-2021 (80% of the two five-year revenue control periods). The total impact of these overestimated costs was not being disclosed publicly for most of the period. Errors in estimation methods were not comprehensively tackled during five-yearly price resets. Consumers were charged for network service provider (NSP) “costs” that did not exist.

Actual network costs were persistently lower than the estimated costs used to set regulated prices, over 2014-2021.

For the most part, estimation errors do not reflect the information advantages of networks relative to the regulator, under effective incentive regulation. Instead, they reflect ongoing decisions by the regulator to retain theories and assumptions to estimate key costs, rather than using data and evidence.

A further contributing factor is that the regulator was unable to correct some estimation errors as a result of successful legal proceedings initiated by networks. The main costs that were overestimated were financing costs (interest rates), opex, capex and tax. Overly generous network productivity and performance reward schemes (called “incentive schemes”) also contributed to sector-wide supernormal profits. 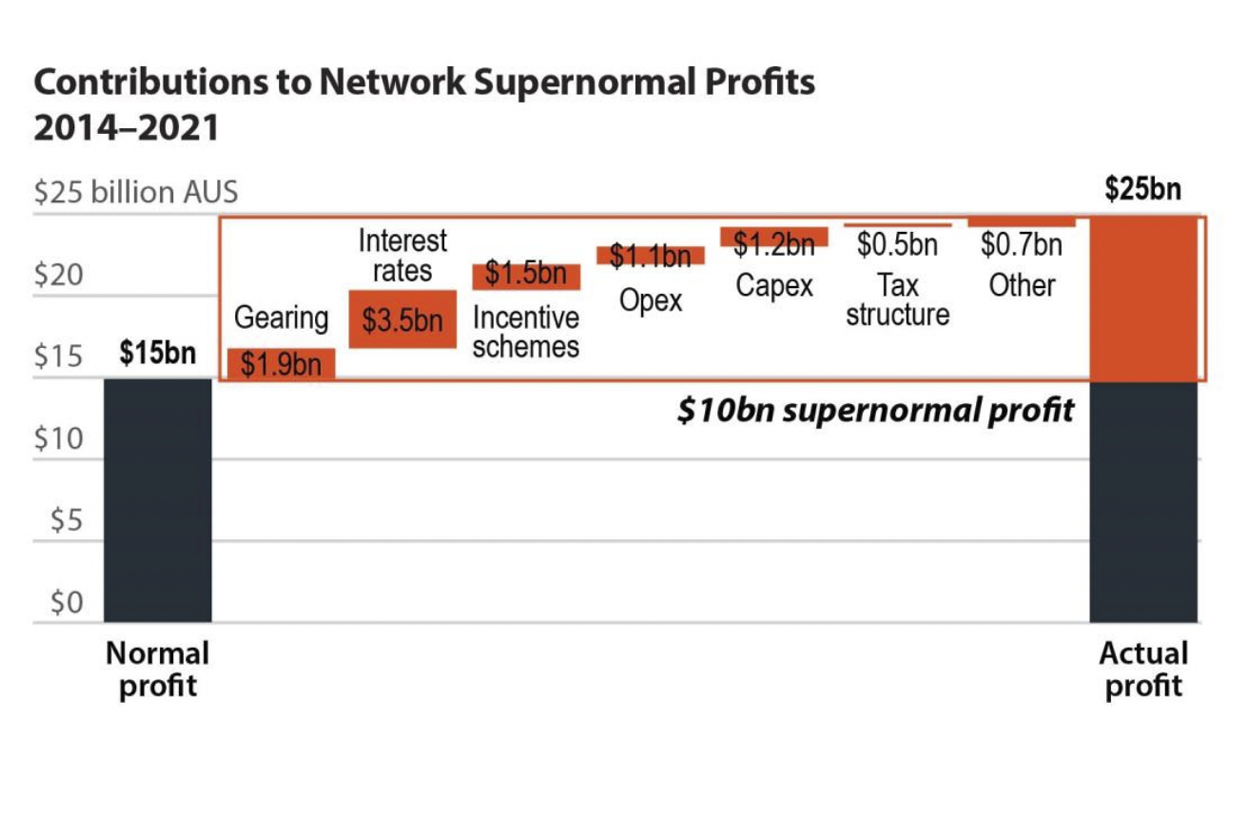 For the cost buckets below, networks charged consumers more than required to cover their actual costs.

Economic Regulation of Energy Networks Is Not Effective

The AER’s explanation of network profits relies on a theory regarding information advantages (“rents”) held by networks even under effective incentive regulation. This theory is applied to estimate efficient supernormal profits based on a multiple of the total value of the network regulatory asset base (RAB) being financed by debt and equity.

This report finds that, on reviewing network profitability data, and the AER’s incomplete explanation of persistent and substantial supernormal profits:

Considering sector-wide outcomes over a majority of two regulatory control periods alongside the factors that resulted in persistent supernormal profits, consumers have clearly been paying substantially more than necessary for safe and reliable regulated energy network services.

Impact on Efficient Investment and Use of Electricity

Supernormal profits are not being reinvested in higher levels of regulated capital investment, as assumed in many assessments of the costs and benefits of supernormal profits. Instead, shareholders are retaining them, including in the form of dividends.

Substantial resources are being diverted from the energy transformation and investment and usage outcomes are being distorted by excessive network prices.

Unless corrected, the total costs to consumers from the profit component of future regulated transmission investment would be 85% higher than the normal profit level over the typical 50-year life of major transmission assets. This would increase the cost of the energy transformation and deter investment in low carbon generation.

How to Fix the Issue

Fast and effective action is required to improve economic regulation so that it constrains network supernormal profits.

We recommend that the Australian Government establish an independent commission of inquiry into the performance of NEM institutions and arrangements, working jointly with participating NEM jurisdictions.

The commission's first step should be to recognise that network economic regulation outcomes for 2014-2021 were inconsistent with the National Electricity Objective. So far, there has been no recognition that economic regulation has failed. As a result, there is currently no impetus to address the causes of this failure.

Outcomes-based reporting and monitoring should be undertaken to ensure that supernormal profits are limited to networks that outperform efficient benchmarks.

The next step is to introduce effective performance metrics, reporting and monitoring arrangements for the energy market bodies involved. Clear performance metrics should be established for each organisation based on ensuring that sector-wide regulated network revenues more or less match total costs. Regular outcomes-based reporting and monitoring should be undertaken to ensure that supernormal profits are limited to networks that outperform efficient benchmarks.

The commission should also work on making a comprehensive set of changes to the National Electricity Law and Commonwealth accountability arrangements for the AER to improve the economic regulation of networks. In IEEFA’s view, this should include the following:

Current barriers to the effective participation of consumer representatives in regulatory processes should be removed. These barriers include insufficient information on supernormal profits, errors in the data and methods used to set the RORI and the refusal by Energy Consumers Australia to support research into excessive supernormal network profits on three occasions since 2018.

Current barriers to the effective participation of consumer representatives in regulatory processes should be removed.

To ensure frameworks for future investment, including energy transformation investment, new jurisdictional schemes and the announced Rewiring the Nation Corporation are efficient, it will be necessary to ensure they do not contribute to excessive network supernormal profits.

A wider review of the performance of economic regulation should be undertaken—looking at sectors outside of the energy sector. Other economic regulators rely on false corporate finance theories in setting regulated prices for major infrastructure services. The commission should identify whether regulatory systems for monopoly infrastructure in other sectors also result in excessive supernormal profits and adversely affect consumers and international competitiveness.

Note: This report was finalised before the AER's State of the energy market 2022 report was released. 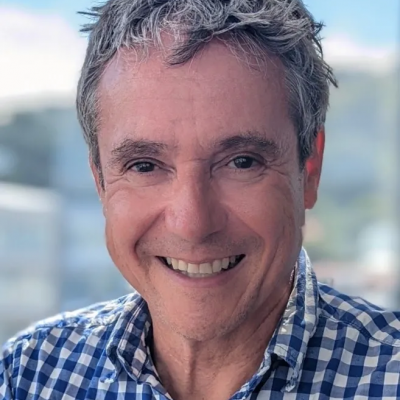