Offshore wind development is gaining critical mass in the U.S. market. In January 2019, the state of New York massively upgraded its offshore wind power target from 2.4GW by 2030 to 9GW by 2035.

There is massive offshore wind power potential to be harnessed in emerging and developed countries at a cheaper rate than building and maintaining new fossil fuel plants. 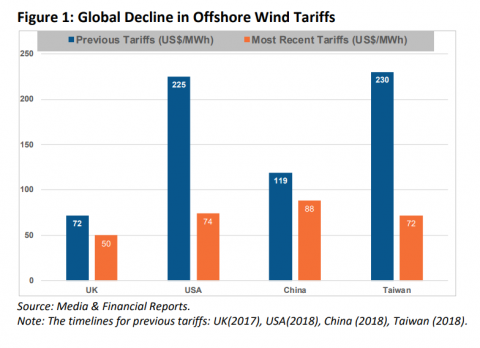 The installation of offshore wind power capacity is likely to reach 85GW by 2024 with an annual growth rate of 22% over the next five years, according to a recent report from Norwegian Energy Partners (Norwep). The Global Wind Energy Council (GWEC) predicts similar momentum, noting the emergence of new Asian countries likely to contribute 5-7GW of installations annually. 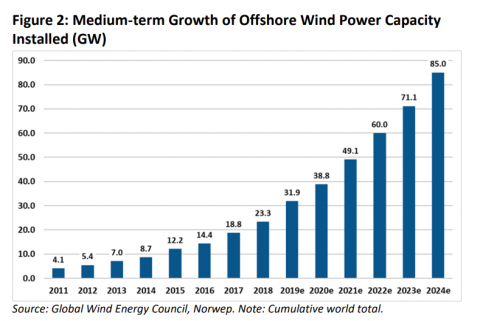 Norwep also highlights that yearly capital expenditure in the offshore wind power sector could reach €50 billion (bn) (US$55bn) by 2024, translating into a total global spend of €190bn over the coming five-year period.

In this note we review developments in offshore wind projects in emerging markets in Asia Pacific, including cost trends and policies, against capacity targets in Asia, the United States and Europe.

For instance, China looks set to become one of the world leaders in the offshore wind sector. China took the global lead in annual offshore wind capacity installations in 2018 with 1.8GW installed compared to 1.3GW and 0.9GW from earlier leaders UK and Germany respectively. China has started to build huge internal capacity in manufacturing and technology while creating jobs.

Offshore wind is the new game-changer in the renewable energy transition occurring globally. Governments need to keep up with the pace of development and investment by domestic and international players as emerging countries strive to meet their necessary and ambitious renewable energy targets.