Notes From China and India: ‘Silent Revolution’ in Hydro, the Price of Capital Is Down, More Solar

Another way of looking at the trends in China that we’ve explored in recent posts (“China’s Unwinding From Coal,” “January Decline in China’s Coal Imports Adds to 30 Percent Slide in 2015,” “Global Transition Occurring Faster Than Expected”) can be seen in a phrase just coined by Platts: the “silent revolution” in the country’s electricity markets.

Platts’ Michael Cooper makes the link between growth in hydroelectricity and concomitant decline in coal in an article published over the weekend under the headline “Times a-Changing for China’s Thermal Coal Market on Increased Hydro Flow.”

While wind and solar are playing a growing part in China’s energy economy transformation, the buildout over the past five years of 100 gigawatts of new hydro has had a huge impact in reducing China’s thermal coal consumption.

Here’s a passage of note from Cooper:

“China’s hydroelectric dams are generating approximately 20% of China’s annual electricity output, compared with a share of around 70% for coal-fired generation. At the same time, China is investing heavily in alternative energy sources such as nuclear, solar and wind turbine generation, albeit starting from a very low base.This winter season in China actually witnessed a decline in coal-fired power generation, with the Asian country’s coal plants output falling 4.3% year-on-year in the January-February 2016 period to 678 billion kWh, said China’s statistics bureau.In fact, China’s coal-fired electricity generation has recorded negative growth for most of 2015. As a result, prices for thermal coal imports failed to produce their traditional November to February rally.” 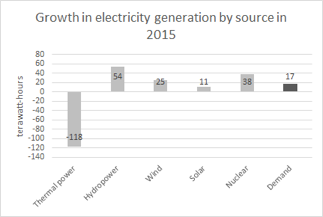 THE LATEST SIGN THAT INDIA’S ELECTRICITY TRANSFORMATION IS MOVING APACE: 10-YEAR INDIAN GOVERNMENT BOND YIELDS ARE NOW DOWN TO 7.5 PERCENT. That’s a three-year low and evidence that the cost of capital for renewable energy is falling, a trend that will encourage the Indian government to continue its pursuit of economic and energy policy reform.

Another note of interest on the Indian solar front: An additional 1.2 gigawatts of solar capacity has just been added to the country’s electricity-buildout pipeline (“‘Stark differences’ Seen in Indian State Jharkhand’s 1.2GW Solar Auction Bids”). This auction didn’t repeat the record low prices notched recently, but still encourages the development of more distributed solar, all of a piece with India’s larger plan.

Bridge to India estimates that India has a 23-gigawatt solar project pipeline at the end of March 2016 (with 15 gigawatts already awarded, and another 8 gigawatts under tender process) – an amazing standing start in just 15 months. With installation annual grow running at over 300 percent, India will enter next year as potentially the third largest installer of solar globally behind only China and the U.S.