A New York court has affirmed the state environmental agency’s authority to deny an air permit for a gas-fired power plant under its 2020 climate change law, the first time that a judge has acknowledged the measure in rejecting a permit.

In rejecting Danskammer Energy’s appeal of the denial of its application to build a 536-megawatt natural gas-fired power plant, the New York Supreme Court in Orange County ruled that the Legislature’s clear intent was to spur action on the urgent issue of climate change.

Legislature had identified climate change as “a currently existing, urgent problem that was worsening..."

Justice Robert Onofry held that the Department of Environmental Conservation (DEC) action in denying the permit was consistent with its authority under the state constitution. Onofry rebuffed arguments that the DEC was usurping a legislative function by relying on the statute before writing rules to guide its implementation.

The justice also determined the DEC acted within its authority because the Legislature had identified climate change as “a currently existing, urgent problem that was worsening, not a developing or potential problem that might arise if appropriate action is not taken in the future.”

The statute, which requires state agencies to consider state greenhouse gas (GHG) limits in evaluating permit requests, took effect immediately. Onofry said imposing a delay until rules were issued would have made the measure “completely toothless for years to come.”

The decision means that the state climate law provision on permit review took effect immediately, and agencies with permitting authority must adhere to it.

The environmental department denied the Danskammer application in October 2021. The agency had determined that construction and operation of the Newburgh plant would be inconsistent with the New York Climate Leadership and Community Protection Act. The climate law establishes a range of requirements to reduce statewide greenhouse gas (GHG) emissions. The measure requires the state to achieve 70 percent zero-emission electricity by 2030 and 100 percent by 2040.

Although Danskammer had said it planned to convert the plant eventually to either green hydrogen or “renewable” natural gas, the permit application was for a 100 percent natural gas-burning facility. The DEC Division of Environmental Permits’ letter of decision observed that the applicant’s “aspirational” intention of fuel-switching raised a number of concerns.

The agency noted that the lower volumetric heating value of hydrogen means more fuel must be burned to produce the same amount of energy; burning the increased volume of fuel would be expected to cause higher nitrogen oxide emissions.

The agency’s decision provides a useful model of how both state and federal regulators—including the Federal Energy Regulatory Commission—should scrutinize permit applications for new natural gas infrastructure projects closely, rather than simply rubber-stamping them based on an applicant’s assertions. IEEFA noted the state agency’s action had saved electricity ratepayers millions of dollars by preventing unneeded power plant construction.

The court’s ruling may be subject to an appeal. An administrative appeal within the agency of the DEC’s findings on other grounds is pending, and that decision may also be subject to further appeal. The DEC’s Division of Environmental Permits, however, has won an important first round. 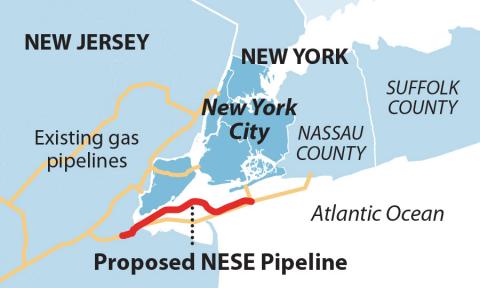