IEEFA India: The economics and politics of rising non-performing assets

India continues to reel under a huge non-performing asset (NPA) burden of over Rs 10 trillion (USD 144 billion) as of financial year (FY)2017/18.

Rising NPAs in the power sector are a key factor behind the banking sectors woes. In India, around 61 GW of thermal capacity is stressed, with total outstanding debt for the 34 stressed power assets sitting at Rs174,468 crore (USD 26 billion).

Thermal power plant developers are under huge pressure, faced with capacity utilisation rates below 60% over the past two years combined with excessive financial leverage that makes debt servicing extremely difficult. Further, late payments by loss-making DISCOMs and renegotiation of tariffs on power purchase agreements (PPAs) have added to the woes of developers, resulting in a double whammy that is clogging up the banking and power sectors alike.

Government interventions are shaping stranded asset risk by undermining the Reserve Bank of India’s attempts to force necessary bankruptcies to resolve the situation. For instance, interventions are reducing the viability of solar by introducing import duties on modules, as well as risking new stranded assets by driving new investments in ‘non-economic’ high-carbon assets. Favourable interventions by the government and public financial institutions—by holding promoters accountable, forcing through bad-debt write-offs, and ensuring asset restructurings are done expeditiously, transparently and fairly — are being ultimately footed by the taxpayer.

As per the ODI-IISD report, entitled ‘India’s stranded assets: how government interventions are propping up coal power’, the Government of India is intervening in coal power (across the value chain from coal mining to power production and distribution) in several ways, which includes supports provided through an estimated Rs74,114 crore (USD 11.3 billion) in public finance, Rs13,960 crore (USD 2.1 billion) in national subsidies, and Rs24,724 crore (USD 3.8 billion) through policy postponement (in FY2016/17).

An analysis of geographic and ownership distribution of stranding power assets reveals: 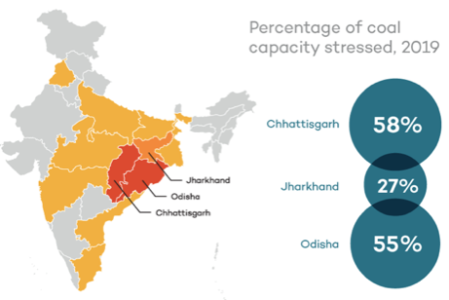 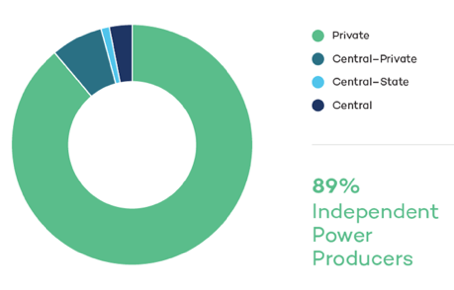 The times are changing in India with the country seeing increasing installations of renewable energy. India has pivoted from building massive thermal power capacity to now building lower cost renewable energy capacity at an unexpected rate. Figure 2 depicts how renewable energy is outstripping thermal capacity additions by a widening margin.

Figure 2: Thermal and Renewable Energy Capacity Additions Over the Years 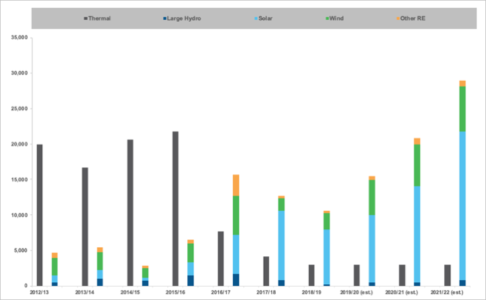 However, a failure to resolve the issue of NPAs means it will be increasingly difficult for India to maintain even 2-4GW of net new thermal power plant (TPP) installs annually in the face of end-of-life closures and a lack of financing for new TPPs.

The Central Electricity Authority (CEA) conducted a study to estimate the optimal generation capacity mix under various technology scenarios, including the issue of intermittency associated with renewable energy sources and other constraints, to meet the projected peak electricity demand and electrical energy requirements to the year 2029/30. The CEA report maps a target of 523GW of renewable energy capacity (including hydro) for India by 2030. According to the report, installed capacity and the generation mix is changing, and the share of thermal capacity is declining, while the share of renewable energy is increasing.

IEEFA notes the ongoing government interventions have an opportunity cost: the funds or services allotted by the government could instead be diverted to reducing unfunded DISCOM subsidies or funding general public services. Reduced impediments to renewable energy infrastructure would also unlock new investment, employment and lock in lower cost domestic power generation, a boon to industrial and service sector growth, as well as consumers.

Capital markets should also be held accountable for poor decision making: a quicker pathway to bankruptcy can send signals to better evaluate risks, minimizing the danger of large amounts of bad debt in the banking system and contributing to more stability and higher GDP in the long term.

Switching promoters without an equity write-off does not address underlying structural problems. Promoters have to be made more accountable; they reap the rewards of success, but they need to also carry the cost of failed business decisions.

It is important to identify and evaluate the role of policy support mechanisms for coal. Faster ramping coal power is a key initiative – both requiring capex and a modernisation of grid management operations, allowing coal to be better integrated with ever higher variable renewable energy share. A time-of-day (ToD) pricing signal would better incentivise variable generation ‘kicking in’ at times of peak demand.

Vibhuti Garg presented this paper at the Energy Finance Conference 2019 at IIT Madras on 16 August 2019. The conference was jointly organised by the Department of Humanities and Social Sciences, IIT-Madras and the Centre for Financial Accountability, New Delhi.