Here, in one chart, is an IEEFA picture worth a thousand words.

While some $130 billion was invested last year in renewable-energy development in the BRICS countries—Brazil, Russia, India, China, and South Africa—billions more are required if these countries are to meet their commitments to climate-change mitigation policies.

The four countries, in all, have announced goals that will require an annual investment over the next few years of $177 billion. As the chart here shows, there’s a gap between what’s being spent and what is required.

How to bridge this gap? 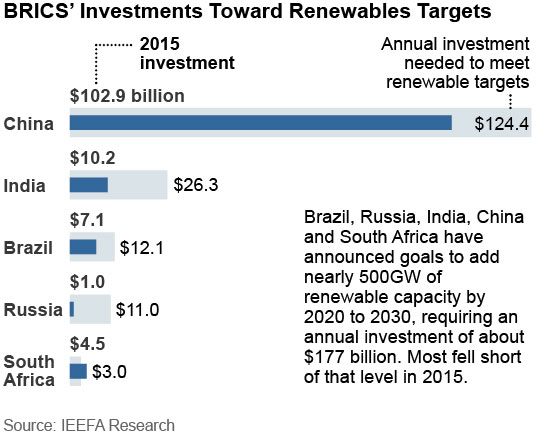 We see important stakes being taken by development banks that include the New Development Bank (NDB), which really is new. It is a jointly owned and operated bank funded by the five BRICS nations, and this year made its first loans.

Such efforts aren’t enough, though, and in a research brief we just posted, we note the importance of private-public partnerships, or “blended finance.”

Under the “blended finance” model, public capital can catalyze much larger private investment in renewables. By our lights, every $1 set up through such models to fund infrastructure projects in developing countries and promote sustainable development will draw $4 in private investment.

The caveat is that publicly financed banks like NDB invest appropriately, putting dollars into energy projects that are truly sustainable and that do not rely on outdated fossil-fuel development.

Jai Sharda is an IEEFA energy-markets consultant and managing partner of Equitorials.