March 29, 2019 (IEEFA Sydney) – The latest Office of the Chief Economist (OCE) Resources and Energy Quarterly report from the Australian government forecasts declining thermal coal prices and value of exports in the medium term.

Furthermore, the inclusion of the proposed Carmichael mine for Queensland in the latest forecast is contrary to the OCE’s own assessment that the seaborne market for thermal coal will continue to progressively decline in the medium term.

Despite the market decline, the OCE forecast appears to have forced in additional Australian thermal coal export volumes on the assumption that it will be able to find off-takers.

Competition is increasingly in favour of renewables

IEEFA notes this is highly optimistic in light of the OCE also foreseeing that demand in Australia’s biggest thermal coal export destinations is expected to go into decline.

Even India, the key earmarked destination for Carmichael coal, will see thermal coal imports decline at 1.5% a year in the medium term according to the OCE forecast. This is a clear acknowledgement that renewable energy is the low-cost source of new supply. The government of India clearly targets 40GW annually of new renewable energy investment over the coming decade.

The OCE appears to be of the opinion that growing but relatively small markets in Vietnam, Philippines, Pakistan and Bangladesh will prop up Australian exports. However, Australian coal will find increasing competition from Indonesia and South African thermal coal exports as the overall market declines.

Indonesia exports far more thermal coal to China and India than Australia – as those markets decline as forecast by the OCE, Indonesia will be seeking new markets in South and Southeast Asia, increasing competition with Australia.

An important further point is that Australian thermal coal is also increasingly in competition with renewable energy in its current and potential Asian markets – a competition becoming increasingly one-sided in favour of renewables.

A key chart from the OCE also highlights that thermal coal’s contribution to the Australian exports is not as large as is often made out, currently placing below iron ore, coking coal and LNG. By 2023-24 it will also rank below base metals. This also pales in comparison to far more sustainable service export revenues from tourism and education. 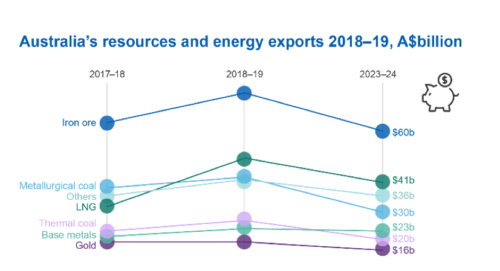 The proposed Carmichael coal mine would make an even smaller contribution to Australia’s economy. If the mine proceeds, it will produce a lower energy, high ash product that will be assessed against the lower grade Australian thermal coal benchmark. The price for this lower grade coal was recently as low as US$56/t, significantly lower than the current high grade price of US$90/t.

The OCE forecast is only a medium-term outlook. In the long run, the importance of thermal coal to the Australian economy will deteriorate at a greater pace as the terminal decline in the coal market accelerates, driven by the technological transition to renewables.

IEEFA highlighted in a November 2018 report that activities on the ground in Australia’s thermal coal markets are a better indicator of where the market is going than overly optimistic industry and government forecasts.

The International Energy Agency foresees an overwhelming, permanent decline in the seaborne thermal coal market under any scenario that gives at least a reasonable chance of limiting global warming to 2 degrees or less.

With the latest Renewables and Energy Quarterly report forecasting declining value of exports across thermal coal, iron ore, LNG and metallurgical coal over the medium term, now is the time for Australia to refocus on strong new growth markets within the resources sector.

The technological transition in energy markets sweeping the world will create demand for resources such as lithium and cobalt which Australia has in abundance. Hydrogen produced from the nation’s world-leading renewable energy resources should also serve growing international demand.

Australia’s Federal Minister for Resources, Matt Canavan, has already highlighted this growth opportunity for Australia, stating “As the world’s largest producer of lithium and with mineral reserves covering 90 per cent of the elements required in lithium-ion battery production, we have an enormous opportunity to leverage off this rapidly-growing industry.”

With the thermal coal market entering inevitable long-term decline, Australia should re-focus its energies on future growth markets and away from propping up industries with a decaying outlook.