IEEFA Australia: Gas is not a transition fuel, Prime Minister

Natural gas, touted as the “transition or bridge fuel” to replace coal in electricity generation, cannot pave the way to zero emissions. It is too expensive and too emissions intensive and demand for gas-powered generation has fallen.

As gas supply on the east coast of Australia has tripled since 2014 (primarily for export), domestic gas prices have also tripled. Producing yet more gas is no solution to Australia's high domestic prices.

In Australia, gas-fired power generation has attracted no new investment and there are few proposed investments. All committed investments and the vast bulk of proposed developments are in renewable energy.

“There is no credible energy transition plan, for an economy like Australia in particular, that does not involve the greater use of gas as an important transition fuel.”

Natural gas has often been touted as the “transition or bridge fuel” for the electricity sector – a bridge to replace coal’s greenhouse gas emissions, eventually paving the way for an emissions-free future.

Nothing could be further from the truth.

IN AUSTRALIA, DEMAND FOR GAS-POWERED GENERATION HAS FALLEN 41% SINCE 2014, according to the Australian Energy Market Operator (AEMO). 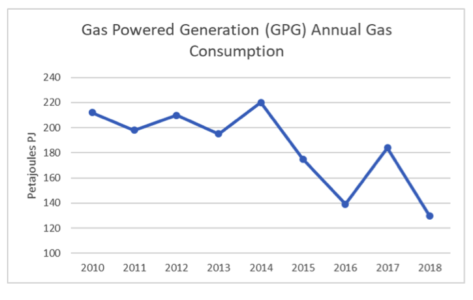 Gas prices are fixed by the industry at levels far in excess of international parity prices. Prices in Australia have fallen but they have not fallen by nearly as much as those in Asia or Europe. As a result, gas has become an uncompetitive fuel source for power generation in Australia.

Rod Sims, chairman of the Australian Competition and Consumer Commission (ACCC), has been a vocal critic of gas prices in Australia. The ACCC has completed a body of work extending back to 2017 clearly demonstrating that prices paid by Australian gas consumers have been, in most cases, well above international parity prices. The tragedy for Australian gas consumers is that despite this abundant and clear evidence of price-fixing by gas producers, nothing of any substance has been done by either politicians or regulators to give substantive relief to energy consumers.

Sims, the Productivity Commission and the Prime Minister have all called for the opening up of more high cost coal seam gas (CSG) fields, believing more gas equates to cheaper prices.

THEY MUST BE OBLIVIOUS TO THE FACT THAT GAS SUPPLY ON THE EAST COAST OF AUSTRALIA HAS TRIPLED SINCE 2014 (primarily for export) and domestic gas prices have also tripled. Producing yet more high-cost gas is no panacea to the problem faced in Australia of high domestic prices in a low-priced gas world.

In the absence of a competitive domestic gas market, the solution to the gas price problem has to be a non-market solution. A domestic gas reserve on existing and prospective gas fields at a reasonable price of A$5/gigajoule will assist gas-intensive industries to survive.

Recently, the Federal Minister for Resources Matt Canavan announced he was “considering options” to toughen policy and bring down gas prices. As the minister has been in the position for more than three years already, it is hard to conclude this is anything other than another stalling tactic and will result in nothing substantive.

It is often instructive in any analysis of energy to follow the money. In Australia, there is currently no committed new investment into gas-fired power generation, and only a handful of proposed investments.

All committed investment monies are in unsubsidised renewable energies, as is the vast bulk of proposed developments.

However, it is not just in practical terms that expensive domestic gas is not the “transition fuel.”

INCREASINGLY, GREENHOUSE GAS EMISSIONS ARISING FROM NATURAL GAS AND LIQUEFIED NATURAL GAS (LNG) ARE BEING QUESTIONED. There are two reasons for this. Firstly, LNG is an extremely energy-intensive process as the gas needs to be super cooled to -162°C for shipping, and secondly, fugitive methane emissions in the gas supply chain only need to be at 3.1% to make gas a worse emitter than coal.

Methane’s role in global warming cannot be overstated. Over a 20-year timeframe, methane traps 86 times as much heat in the atmosphere as carbon dioxide. It is responsible for about a quarter of total atmospheric warming to date.

The fracking boom in the U.S. has led to significant increases in methane emissions. Methane is emitted from a number of sources in the gas supply chain from venting, flaring, high point vents in pipelines and leakages from wells, pipelines, LNG facilities and regasification facilities.

Robert Howarth, a professor at Cornell University, calculated that one-third of total rising global methane emissions came from one source, shale oil and gas. To slow global warming immediately, Howarth recommends “the best strategy is to move as quickly as possible away from natural gas, reducing both carbon dioxide and methane emissions”.

Gas is not the energy source that gets us to zero emissions. It is quite simply too expensive and too emissions intensive.

Bruce Robertson is a gas/LNG analyst with IEEFA.

IEEFA Australia: Gas industry cries wolf one too many times on gas shortages

IEEFA update: Australian consumers paying 71% more for gas on average than government inquiry says they should be paying