Has the Bakken peaked?

The decline in high-caliber wells carries major fiscal, financial and policy implications. Investors will have to temper expectations. State and local budgets will lose oil and gas revenues. Regulators will need to reconsider the economic rationale for existing pipelines, including the controversial Dakota Access Pipeline (DAPL).

The Bakken oil industry has been on a gut-wrenching roller coaster ride for the last two years, but it may be headed toward a long-term slide. Crude oil production in the region reached an all-time high in late 2019. But in early 2020, the COVID-19 crisis sent oil prices tumbling, sending oil output from the Bakken Shale formation down more than 40 percent to its lowest level since 2013. Crude oil production partially rebounded later in the year but even today remains about one-quarter below its peak. Despite a sharp rise in U.S. oil prices over the past several months, drilling activity in the Bakken remains at less than half its pre-pandemic levels, and the region’s recent oil output has faltered.

The Bakken’s substantial production decline and the slow recovery of drilling despite rising oil prices raise a critical question: Will Bakken crude oil output ever recover to its previous highs?

A new IEEFA analysis suggests that a shortage of high-quality drilling sites poses a long-term risk to Bakken oil production. This analysis uses data from IHS Markit, one of the world’s premiere oil and gas data services, to explore the productivity of wells already drilled in the Bakken and the quality of the remaining acreage left to be drilled in the region.

In the roughly 13 years since the Bakken oil boom began in earnest, the region’s oil producers have increasingly concentrated on a few core areas where horizontal wells produce an abundance of oil. But IEEFA’s analysis suggests these core areas are almost exhausted, and most of the Bakken’s best wells have already been drilled.

Moving forward, oil companies may be able to drill about 700 new top-tier wells—those whose peak oil and gas output would rank among the top 20 percent of wells drilled to date. By comparison, Bakken oil producers brought 600 wells of the same caliber into production in 2019 alone.

If Bakken oil producers resume pre-pandemic rates of drilling, they could easily deplete the remaining inventory of top-quality drilling sites in just over a year. 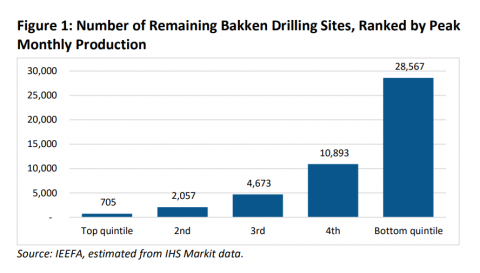 As the Bakken oil industry depletes its remaining inventory of top-tier wells, it will have no choice but to shift drilling to less-productive areas. The newer wells will produce less oil and gas, and will require steadily higher prices to justify the roughly $7 million price tag to drill and complete a Bakken well. Lower production and weaker profits could force many Bakken oil drillers to curtail output, and aggregate Bakken oil production may fall as the average well productivity declines.

The inexorable decline in the quality of new Bakken oil wells, and the potential decline in total oil production, carries significant fiscal, financial and policy implications. Investors may be forced to lower expectations for profits from oil companies operating in the region. State and local budget planners may need to reduce their expectations for oil and gas revenues. Pipeline regulators may need to reconsider the economic rationale for existing pipelines, particularly the controversial Dakota Access Pipeline (DAPL); even modest declines in production could render DAPL’s capacity superfluous.

The inexorable decline in the quality of new Bakken oil wells, and the potential decline in total oil production, carries significant fiscal, financial and policy implications.

At the same time, as North Dakota enters a long-term transition away from the oil and gas sector, new questions will arise about the Bakken oil industry’s ability to pay to plug old oil wells and decommission unneeded infrastructure. Investors and policymakers ignore these trends at their peril.

Press release: Oil and gas producers are not increasing production in response to current price spikes