Many international companies—including Total, Wintershall, Petrobas, Petronas, Pan American Energy (whose largest shareholder is British Petroleum)—have now entered Vaca Muerta, though the process by which they obtained their interests in the region remain opaque.

OpenOil, a Berlin-based organization that provides open data sources and analysis on oil and gas, analyzed the initial large Vaca Muerta deal between YPF and Chevron. The report concluded that the project would need upward of US$9 billion in subsidies in order to make the project viable.

The Argentine government acknowledges that it is the principal driver of development in Vaca Muerta. The plan is for the private sector to take an increasing role.

The government of Argentina and a network of regional and global oil and gas companies have combined to develop the country’s large fossil fuel reserves in an area of Northern Patagonia known as Vaca Muerta (Dead Cow). The plan is unlikely to succeed.

The plan seeks to double the nation’s oil and gas output within six years. Success in Vaca Muerta is seen by Argentina’s leadership as the key to its economic recovery. The plan faces strong headwinds from current fiscal, market, political and environmental forces that are likely to continue and slow, if not halt, the plan’s progress altogether. 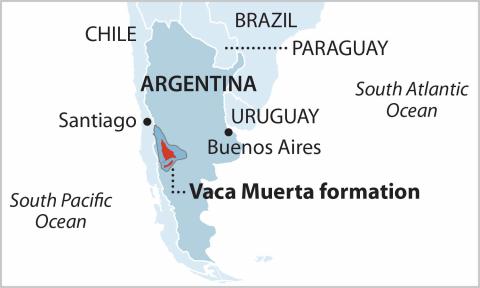 Argentina’s plan requires substantial, long-term subsidization. The country’s leadership has promised significant production subsidies to global oil and gas interests, subsidies it can ill afford. From 2016 to 2018, Argentina reduced these subsidies by 54% (from US$15.6 billion to US$7.2 billion). The Argentine government and economy are wracked by high inflation, currency devaluation, fiscal deficits and a failing trade policy, which required a multi-year US$57 billion bail-out from the International Monetary Fund (IMF), the largest in its history. Going forward, Argentina has agreed to further reduce both production and consumption subsidies. This reduction will come at a time when the country’s energy plan and its partners require more subsidies in order to meet Argentina’s ambitious production goals. Recent actions to reduce subsidies have proven disruptive and signify a broken promise by the Argentine government, according to oil and gas producers.

The organizational hub for development is Yacimientos Petrolíferos Fiscales Sociedad Anónima (YPF), Argentina’s majority state-owned oil and gas company. It is tasked with the strategic energy goal of moving investment from several more mature conventional production zones to the Neuquén Province, the base of Vaca Muerta’s unconventional oil and gas area. YPF has entered into partnership agreements with some of the world’s leading companies, including BP, Exxon Mobil, Total S.A., Chevron, Shell, Equinor and others. The Argentine company is financially ill-prepared to take on this role. Its business plan is tied to heavily to government subsidies, which represent the difference between profit and loss. The company’s financial position is characterized by weak stock performance, eroding revenues, declining cash flow and flat production. It is unprepared for the challenges facing the global oil and gas markets.

Support by foreign investors is critical to Argentina’s energy success. The current energy plan calls for the government of Argentina and Argentine-based companies to pay 64% of development costs. The plan also expects Argentina’s global partners to assume these costs over time. This expectation is unrealistic. Recently, the country announced a substantial reduction in its subsidy program, which prompted Tecpetrol, a key global partner, to reduce production, lay off workers and threaten suit against the government. YPF, Argentina’s leading producer, also voiced its concern that the subsidy reduction would affect financial performance.

Most of the largest foreign companies involved in Vaca Muerta have made it clear that their participation will be hinged on subsidies. Their financial commitments, thus far, have been small and tentative. While partnership agreements are in place, actual development has been slow. The global oil and gas industry is recovering from a decade of value destruction from poor capital expenditures. The industry faces challenges from investors who are increasingly questioning highly speculative new investments. Over the last six years, 31 projects have been launched in Vaca Muerta. Only five are in active development, and some of these are now threatened.

Investors are concerned about the slow pace of development in Vaca Muerta compared with other unconventional gas and oil producing regions such as the Permian Basin and Eagle Ford in the United States. Six years in, Vaca Muerta has completed only 342 unconventional oil and gas wells. By contrast, in 2014, six years into aggressive development of the Permian Basin, 3,560 wells were in production. Eagle Ford completed 478 wells after merely two years of development.

The abrupt reduction in Argentina’s production subsidy program—announced in January 2019 but applied retroactively for 2018 production—is shaking investor confidence. When the government recently announced this reduction, which also halted any new projects, Moody’s rating agency deemed the action “credit negative” for Tecpetrol, YPF and Pan American Energy (BP). Other companies that are affected by the decision include Total, Wintershall and ExxonMobil. Moody’s stated: “This change in energy policy stands to weaken investor sentiment and the business environment in the energy sector, and will likely persuade companies to postpone or reduce capital spending on unconventional gas projects.”

The energy plan faces a wide range of daunting risks, including:

In light of the many economic and political challenges it faces, the country’s oil and gas production goals seem overly optimistic. The likelihood of these underlying risks emerging will likely ensure that the goals will not be met. How the production shortfalls and energy policy missteps are managed will determine how Argentina’s energy future develops.

Notes About This Analysis: