By 2020, Illinois Basin production will have fallen 40 percent since its peak in 1990, part of a widespread decline in the U.S.

Power markets are modernizing, and traditional coal-fired generation is becoming increasingly anachronistic. In 2018, 15,500 megawatts (MW), or 6 percent of all coal-fired capacity in the U.S., was retired.

As the decline in Illinois Basin’s coal-production continues, companies that have mines in the region will continue to face market pressure. They include (ranked by amount of Illinois Basin production) Alliance Resource Partners, Murray Energy and its partner Foresight Energy, Peabody Energy, Hallador, Arch Coal and White Stallion.

Twenty years from now, most of the Illinois Basin coal industry will be gone. Currently one of the major U.S. producing regions of thermal coal for domestic and foreign electricity generation, by 2040 it will have largely faded away as utilities shift to cleaner, cheaper generation resources. 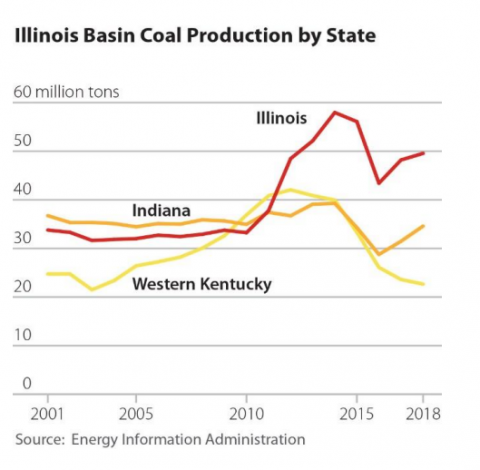 In 2018, the Illinois Basin produced 106.8 million tons of thermal coal, about 14 percent of the total mined nationwide. Most of that total was used domestically, the remainder was exported. The Basin, which straddles the Ohio River in parts of three states—southern Illinois, southwest Indiana and western Kentucky—does not produce any of the metallurgical coal used in steelmaking, meaning it cannot escape the rapid transition now under way in the electric generation sector, both domestically and abroad.

Domestic utilities, which bought nearly 80 percent of the region’s coal in 2018, have already announced retirement dates for a significant number of plants over this period, as competitive electric markets compel a shift to newer, less expensive and cleaner wind, solar and gas generation, increasingly supported with energy storage. Notably, these retirements include the largest single purchaser of Illinois Basin coal, Duke’s Gibson plant in Indiana, which will close in phases by 2038.

Gibson’s closing will not be unique, however. From the beginning of 2019 through 2024, at least 15 U.S. plants that buy Illinois Basin coal—in Alabama, Florida, Georgia, Indiana, Kentucky, North Carolina and Tennessee—will be fully or partially retired. That number, which only reflects formal announcements by utilities, is likely to grow as the economics of coal-fired generation continue to deteriorate relative to renewables and gas.

Even those plants that remain online are likely to be used less and less, reflecting a trend that has seen capacity factors at most coal-fired power plants in the U.S. decline sharply over the past decade.

Coal exports, seen just a decade ago as a potential growth market, face the same market threats, particularly in Europe which is moving aggressively away from thermal coal. In addition, there is growing competition from foreign coal suppliers such as Russia and Columbia for this shrinking market.

These threats are already having a major impact in the region. Just in the past year, producers have closed or idled mines that produced almost nine million tons of coal in 2018. Further closures are likely, both in the near- and long-term.

The Illinois Basin will clearly be hit hard economically by the structural decline of the region’s coal industry. Now is the time for local, state and federal policymakers to be planning for the transition in order to minimize the impact of additional coal mine closures, job losses and mining company financial hardships.