At US$5.4 billion, Australia's first offshore wind project will also be its largest electricity project.

Offshore wind projects are much more reliable than the aging thermal power plants that faced 55 plant breakdowns between December 2017 and June 2019.

This project is the right step towards zero emissions power supply, and Australia can achieve above 50% renewable energy penetration by 2030.

The penetration of variable renewable generation in Australia’s national electricity market has been rapidly growing. The contribution from wind, utility-scale solar and distributed rooftop solar generation reached 14.7% of the total energy mix for the last 12 months to October 2019 (and 21.7% including hydro) from just over 1% a decade ago in 2008/09.

The Commonwealth Scientific and Industrial Research Organisation (CSIRO) of Australia calculates the levelized cost of energy (LCOE) for wind and solar – the average minimum price at which electricity must be sold in order to break-even over the lifetime of a project - to be between AU$50-60/MWh. This is low-cost when compared to the LCOE of AU$80-110/MWh for thermal coal and AU$60-120/MWh for gas-fired electricity. 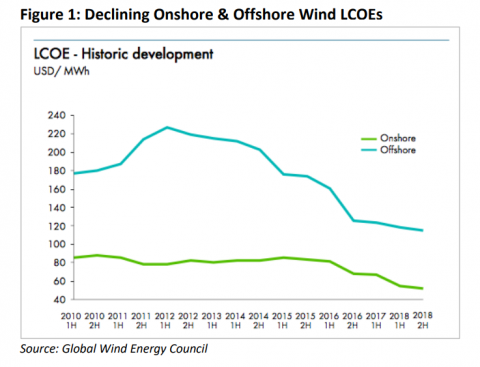 CSIRO expects the LCOE of solar to further decrease to AU$30-40/MWh by 2050 and the LCOE of thermal coal and gas-fired power to remain in the same ballpark in real terms as today’s costs.

Meanwhile, tariffs for offshore wind have drastically reduced in Europe and the United States (U.S.) due to improved wind turbine technologies, innovative financing models, economies of scale and the low externalities of these resources. IEEFA expects offshore wind to be increasingly viable as a third alternative source of zero emissions renewable energy globally over the coming decade, expanding the penetration of onshore wind and solar.