A big clue as to how serious India is about its energy transformation policy is in the doubling this week of its national tax on coal.

The increase, to Rs400 per metric ton (US$6/t) is the third time the coal tax—introduced in 2010—has been doubled, and it applies to all domestic and imported coal. Given that domestic Indian coal sells for an average US$20/t, this coal tax has just become very material—equal to a 30 percent on the wholesale price of coal, before transportation costs are penciled in. 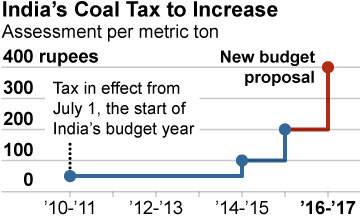 One of the excellent features of Energy Minister Piyush Goyal’s electricity transformation push has been the government’s ability to rapidly scale up deployment of renewable energy and energy efficiency. It has done so by focusing on leveling the energy market playing field without relying on new subsidies, either for thermal or renewable energy. Further, the Indian government has made major progress in its phase-out of fossil-fuel subsidies, of which the most important step has been a reduction of subsidies for imported oil, a shift that has accompanied the international collapse of oil prices. India’s energy strategy is entirely consistent with the analysis of the International Energy Agency, which has long stressed that one of the key prerequisites for a successful transition to a less carbon-intensive economy is the elimination of fossil-fuel subsidies. With the double of the coal tax, solar, wind and hydro electricity are all already now immediately competitive in the Indian electricity market against unsubsidized new imported coal-fired power generation.

Given all the external costs of coal mining and coal-fired power generation in terms of water, coal ash, air and particulate pollution, this tax increase— which affects all thermal and lignite coal used in India—will help further level that playing field for non-polluting renewables.

This increase highlights yet again how the COP21 Paris Agreement continues to have far-reaching global ramifications. Accelerating research and development of renewable energy and energy efficiency, phasing out fossil-fuel subsidies and progressively putting an explicit price on carbon pollution were all key objectives agreed upon at the conference.

AS GLOBAL FINANCIAL MARKETS INCREASINGLY FACTOR IN THESE POLICY AIMS, IT’S NOW A QUESTION OF WHEN NOT IF, the risk profile of fossil-fuel energy investments will continue to increase.

Conversely, the deflationary cost of renewable energy grows more and more evident, and the crossover point is now within sight in an increasing number of global markets (India, China, Chile, Brazil, the U.S.). Capital flight from stranded assets across the fossil fuel sector is accelerating (Shares of Peabody Energy, the largest private-sector coal miner in the world, are now down 99.7 percent over the .past five years), and will underpin the further technology-driven transformation of energy markets.

Indeed, the headwinds for fossil fuels are increasingly evident. They include those increasing coal taxes in India (and Korea, where the levy increased to US$21/t in 2015 from US$15/t in 2014); moves being made to a national emissions-trading scheme like those being undertaken in China and Korea’ tightening emissions requirements on coal-fired power generation in the U.S. and India; greater regulation of mine waste disposal ponds in Brazil and the U.S ; and greater scrutiny of coal mine rehabilitation subsidies and coal company leasing schemes in the U.S.

This is an era of increasing global fiscal budget constraints, and the trend toward greater industry internalization of fossil-fuel pollution costs and the reduction in fossil fuel subsidies is gaining unstoppable momentum.

Not to be overlooked: The 31 percent year-over-year decline in U.S. coal production in January, which suggests that the second largest coal market in the world is likewise transforming faster than almost any forecast.