
About the Authors
Analysis Exelon Pepco District of Columbia

By Allowing the Pepco-Exelon Merger to Proceed, Utility Regulators in D.C. Are Assuring Higher Bills for Ratepayers 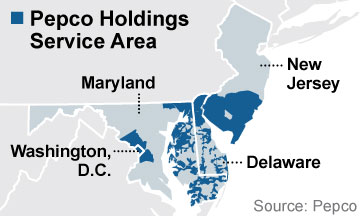 Betty Anne Kane had it right in stating this week that Exelon’s acquisition of Pepco “benefits Pepco and Exelon shareholders but does not provide sustainable benefits to District ratepayers.”

Kane, who cast the dissenting vote in a 2-1 decision by the District of Columbia Public Service Commission to allow the deal to go forward, denounced it in part for the unseemly way the the two companies have thrown money around.

Analysts and proponents of the deal have noted also that it will lead to higher rates and stronger corporate utility resistance to D.C.’s renewable energy goals. We published a report last year (“Corporate Strategy at Ratepayer Expense”) that details how the deal will hurt ratepayers.

This week’s decision concludes an extraordinary proceeding, during which the commission ruled on the acquisition not once, but three times. In its first decision, last August, the PSC voted 2-1 to reject it. D.C. Mayor Muriel Bowser then attempted to rescue the deal, patching together a settlement between Exelon, Pepco, the Office of People’s Counsel (appointed by the mayor), the D.C. attorney general, the D.C. Water and Sewer Authority, and several other parties. Opponents noted that these negotiations took place at the same time that the mayor accepted $25 million from Pepco for naming rights to a soccer stadium.

In February, the commission ruled 2-1 to modify the settlement and approve the deal, subject to the approval by all of the settling parties to the terms of the revised settlement. The D.C. government then backed out, arguing that the PSC’s terms would do less to protect residential ratepayers from rate increases than the original settlement. (In fact, while the original settlement would have “protected” residential ratepayers by instituting a rate freeze through 2019, ratepayers in 2019 would have been hit with the cumulative impact of multiple rate cases at once).

Exelon and Pepco had hoped to close the deal in the second or third quarter of last year. The fact that they were not able to, and that this case became so overtly political and procedurally unusual, can be attributed to the tremendous opposition the proposal engendered. It affects ratepayers in D.C., Delaware, Maryland and New Jersey, where public-interest advocates worked hard to stop it. As the D.C. PSC itself noted in its first order rejecting the merger, “This proceeding has generated more interest and more active participation by parties and interested persons than any other proceeding in the Commission’s more than a century of operations.”

Analysts wasted no time in pointing out that—exactly as merger opponents had predicted—one of Exelon’s first actions will be to raise rates.

On Thursday, a day after the approval came down, analysts at UBS Investment Research wrote this note of interest: “When we last met with management in early March [Exelon] had estimated that improving the Pepco utilities … would likely require the immediate injection of at least $1Bn of capital and take ‘a couple’ of rate case cycles with a timeframe of 24-36 months.”

That’s exactly what we predicted would happen. Exelon is shifting its investments to focus on regulated utilities—now including Pepco—where it can get a stable stream of revenue at ratepayer expense.

D.C. utility customers can now expect multiple rate increases over the next two or three years.