Rapid change sweeping the battery storage market is evident in Wood Mackenzie’s annual market outlooks. Last year, the firm projected that annual installations would total 2,535MW by 2022, up from 295MW in 2017 Its latest annual report, released in March, projects that annual installation in 2022 will be well above 3,000MW, and that it will jump to just under 4,500MW by 2024.

Green Mountain Power (GMP), a unit of Canada’s privately held Gaz Metropolitan, has been actively involved in battery storage development efforts in Vermont since 2015, focusing on using the technology to cut the amount it pays ISO-New England, which operates the region’s wholesale transmission system, for access to and use of the grid.

The success of residential and commercial PV has had a major impact on utility operations, particularly at the local distribution level, where companies are increasingly running into potential overload situations with the increase in power flowing onto the system.

The hype surrounding energy storage occasionally has run ahead of reality, but no longer. The disruption inherent in the technology’s potential—the firming of markets for clean, low-cost renewable energy, in particular—is taking hold across the U.S. The utility sector as a result will never be the same. 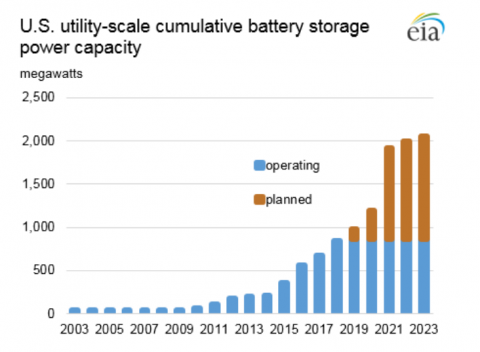 Battery storage remains a tiny segment of the U.S. electric supply sector—data from the Energy Information Administration (EIA) shows just 122 battery storage units in operation through February of this year with a total nameplate capacity of 866 megawatts (MW). And even though the sector is expected to grow rapidly in terms of its percentage of market share, with the EIA projecting an additional 1,184MW of battery storage coming online by 2023, these figures pale in comparison to total installed electricity generating capacity nationally of 1,096,424MW.

Small as these numbers seem, they are significant, and so is the enthusiasm with which the technology is being embraced by the U.S. utility sector. The use of storage is being adopted across the board, by the biggest and the smallest utilities, by member-owned co-ops and investor-owned companies, and by developers competing in the utility market. It is this broad backing that is driving the disruption.

This report, in reviewing the major uses of battery storage technologies, finds usage ubiquitous despite its still-tiny installation numbers. We have sought to highlight operational projects or those either in the advanced planning stage or currently under construction. Energy storage is not a pie-in-the sky proposition; these changes are taking place today.

Beyond these existing projects, this report explores pending developments that offer the potential for broad disruption in the electricity generation sector.