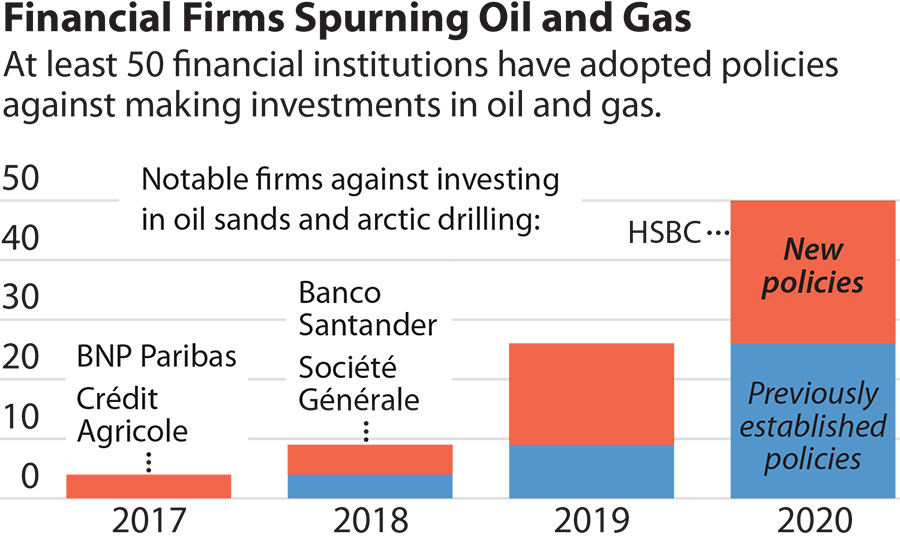 20 October 2020 (IEEFA): Fifty globally significant financial institutions have introduced policies restricting oil sands and/or oil and gas drilling in the Arctic including 23 to date this year, highlighting global capital continues to flee fossil fuels, according to a new tracker developed by the Institute for Energy Economics and Financial Analysis (IEEFA).

“Over 140 global financial institutions have already restricted thermal coal financing, insurance and/or investment and we are now seeing a similar accelerating shift of capital away from oil and gas exploration, starting with high risk oil sands development and drilling in the Arctic.

“This momentum in fossil fuel divestment globally means we expect a continuation of new announcements from other financial institutions seeking to better manage increasing climate risk.”

“Many financial institutions started with divesting coal and then moved to Arctic and oil sands exclusions but with pressure mounting on plastic pollution, and fossil gas no longer being viewed as a bridge fuel, financial restrictions are likely to expand to ethane crackers and new gas investments soon,” says Buckley.

“Tighter regulations on carbon-intensive projects is narrowing margins which means that risks are going up while the promised returns are looking increasingly elusive.

“These latest oil and gas exits are representative of the increasingly challenging economics of the fossil fuel sector, and the increased investment risks, as identified in the International Energy Agency’s World Energy Outlook 2020 last week.”

The World Bank, BNP Paribas, Crédit Agricole Group and AXA were the first major financial institutions to introduce exclusion policies in 2017. Five more announced exits in 2018 accelerated to 18 in 2019. Then in the first half of 2020, a further 23 have announced restrictions, doubling the total from the previous three years.

“The ongoing wealth destruction by oil and gas companies evidenced in the equity markets globally, the growing investor pressure to commit to net zero emissions targets, and the scrapping of projects have led financial institutions to formulate policies restricting the financing of new oil/gas exploration,” says Buckley.

“As well as avoiding reputational and climate risk, it makes clear financial sense for companies to progressively reduce fossil-fuel investments. There is no financial rationale for the world’s financial institutions to remain invested in fossil fuel companies developing yet more reserves.

“Today, high risk oil/gas exploration projects are at significant risk of being stranded.

“A combination of demand destruction due to the oil trade war between Saudi Arabia and Russia at the start of 2020 and the ongoing COVID-19 crisis have further exposed their financial vulnerabilities.”

In the U.S., six financial institutions have done the same, with five of them – Goldman Sachs, JP Morgan Chase, Citigroup, Wells Fargo and Morgan Stanley – all releasing formal exclusion policies against Arctic drilling just within the last four months.

“While some policies are stronger than others, these are still important announcements showing the increasing shift away from risky fossil-fuel investment,” says research analyst and co-author Saurabh Trivedi.

“A best practice policy would include prohibiting any sort of financial product or service for new unabated fossil-fuel operations across the globe with a speedy phase out from existing fossil-fuel investments, similar to what EIB has presented.”

Financial institutions exiting oil and gas which are closest to achieving best practice policy are ABN Amro, BNP Paribas, and Banco Santander. These agencies have policies containing fewer loopholes while those with the most stringent policies are Agence Française de Développement (AFD) and Crédit Agricole group.

“The EIB and the French development bank have seen the writing on the wall,” says Trivedi. “Both of their restrictive policy actions are 100% aligned with the Paris Agreement.

While the recent policy adopted by Norway’s US$1.1 trillion dollar Government Pension Fund Global (GPFG) to divest from all oil and gas exploration companies is noteworthy, it will continue to remain invested in refineries and vertically integrated oil-firms such as Royal Dutch Shell and ExxonMobil.

“RBC is one of the largest financiers of oil sands projects along with JPMorgan Chase and the Canadian Imperial Bank of Commerce,” says Trivedi.

“No restrictive policy measures against oil sands by such large investors raises clear questions over the financial institution’s commitment towards the Paris goal of limiting temperature rise to 1.5° Celsius.”

While IEEFA notes many of the current oil and gas exit policies may be too weak to keep temperatures below 1.5-2.0° Celsius, Storebrand’s recent move out of Exxon and Chevron is significant.

“BP, Shell, Total, ENI and Equinor should not ‘rest easy’,” says Buckley. “Their recent strong rhetoric needs to be followed up by continued, accelerated action.

“We expect global financial institutions exiting oil and gas to continue to tighten loopholes in subsequent policy measures to show a greater commitment towards the global Paris accord.”

Read the briefing note From Zero to 50: Global Finance is Fleeing Oil and Gas 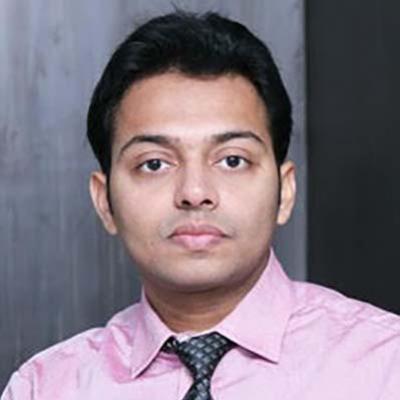