IEEFA U.S.: Small modular reactor “too late, too expensive, too risky and too uncertain” 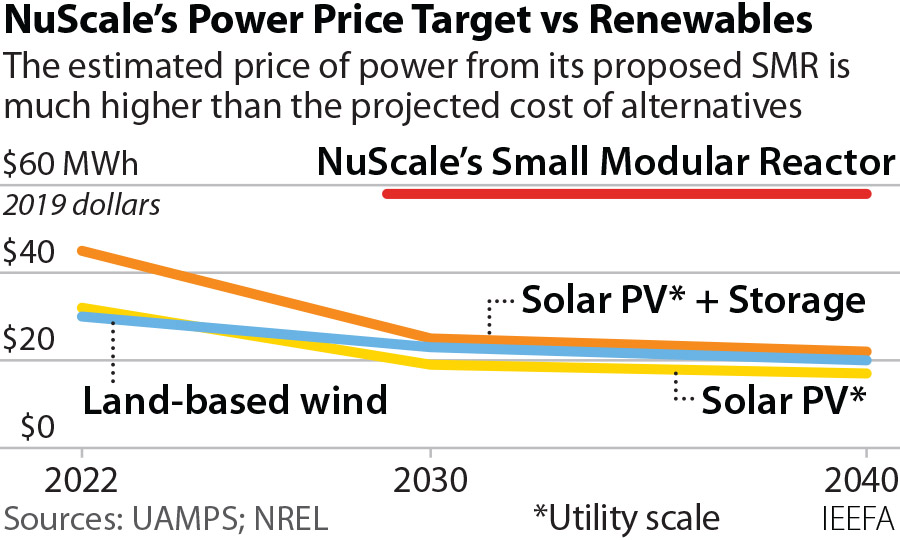 February 17, 2022 (IEEFA)—A small modular reactor (SMR) that NuScale has been developing since the turn of the century is “too late, too expensive, too risky and too uncertain,” according to an analysis of the project by the Institute for Energy Economics and Financial Analysis.

The first-of-its-kind SMR is a serious financial threat to the member communities of the Utah Associated Municipal Power System that have signed up for a share of its power and to any other communities and utilities thinking about doing so. NuScale has optimistically targeted the cost of power from the new plant at $58 per megawatt-hour (MWh), although some estimates predict costs for the power from new SMRs could reach $200/MWh.

Given that the costs of available renewable sources are falling rapidly and that the SMR wouldn’t generate electricity before 2029, the project should be abandoned, said David Schlissel, IEEFA director of resource planning analysis and the author of the report.

“The company has insisted its costs are firm and that the project will be economical,” Schlissel said. “But based on the track record so far and past trends in nuclear power development, this is highly unlikely.”

The risks of the project include:

Schlissel said the communities should consider shifting to renewables for their future sources of power. The NuScale estimate of a $58/MWh price is already almost twice as much as renewable prices. Utility-scale solar-plus-storage costs are about $45/MWh and falling; wind power costs $30/MWh and are also dropping; and utility-scale solar alone costs are at $32 and falling.

“There are cheaper zero-carbon energy options available now,” said Dennis Wamsted, an IEEFA energy analyst and co-author of the report. “NuScale’s SMR is not needed.”

News Conference: click on the screen below or here.