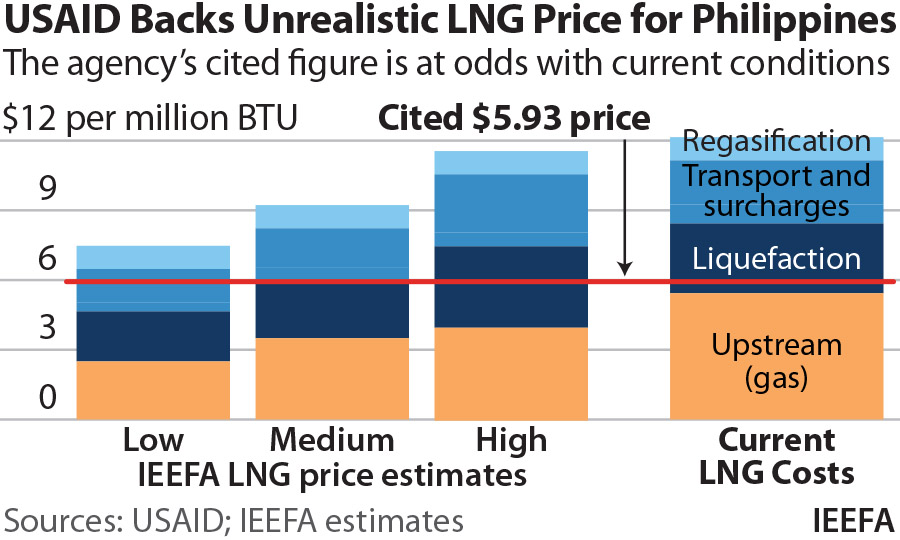 Sept. 23, 2021 (IEEFA) – A recent white paper sponsored by the U.S. Agency for International Development (USAID) promotes the benefits of liquefied natural gas in the Philippines. The report, however, is based on questionable assumptions about global LNG prices, long-term demand and market viability of U.S. exports to price-sensitive countries in Asia, according to a briefing note by the Institute for Energy Economics and Financial Analysis.

The report also ignores recent findings from the international scientific community about the incompatibility of greenhouse gas-intensive fossil fuels like natural gas with global climate goals. 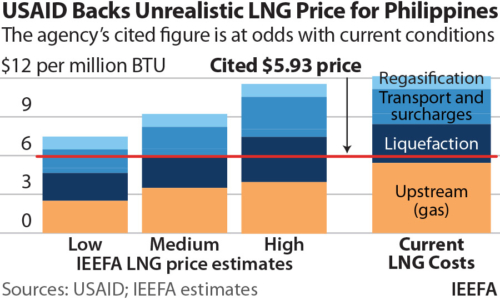 “The sales pitch for U.S. LNG in the Philippines seems to turn a blind eye to current dynamics in the global LNG market,” said Sam Reynolds, an IEEFA energy finance analyst and the briefing note’s author. “Contrary to the report’s claims, LNG is an inherently volatile and unreliable commodity, as demonstrated over the past two years.”

The white paper also presents unrealistic forecasts for tolling and shipping rates from U.S. liquefaction facilities to Asia, and does not consider the cost of regasification and other LNG-related infrastructure. The Philippines does not currently have an LNG import terminal and has almost no gas transmission infrastructure.

Higher costs associated with imported LNG and LNG-related infrastructure are likely to raise fuel costs for existing gas-fired power plants in the Philippines. This is likely to result in higher power prices, in contrast to the report’s findings about the economic benefits of LNG relative to other power sources.

Recent events in the Philippines and the global market also demonstrate that fossil fuels are less reliable than industry advocates claim. Volatile prices and barriers to global trade have resulted in higher prices and, in some cases, gas shortages for emerging markets in Asia.

The idea that LNG can serve as a flexible ‘bridge fuel’ for power generation is based on technical and contractual circumstances that are not present in the Philippines market, according to Reynolds.

“A wholesale buildout of the Philippines’ LNG-to-power fleet would risk locking-in long-term dependence on a foreign imported fossil fuel, to the detriment of cleaner, cheaper domestic renewables,” Reynolds said.

The USAID-sponsored white paper champions the “environmental benefits of LNG.” However, recent reports from both the International Energy Agency and the United Nations’ Intergovernmental Panel on Climate Change point to the incompatibility of natural gas and LNG with global climate targets.

The current pipeline of LNG import terminals and LNG-to-power plants in the Philippines far exceeds demand, indicating a clear mismatch between investor expectations and market fundamentals. For the Philippines and other emerging importers in Asia, LNG should represent a fuel of last resort—a temporary solution to fill indigenous gas supply deficits—rather than a sustainable, long-term solution for meeting domestic energy needs.

Full Briefing Note: The U.S. Push for LNG in the Philippines Is Based on Dubious Assumptions