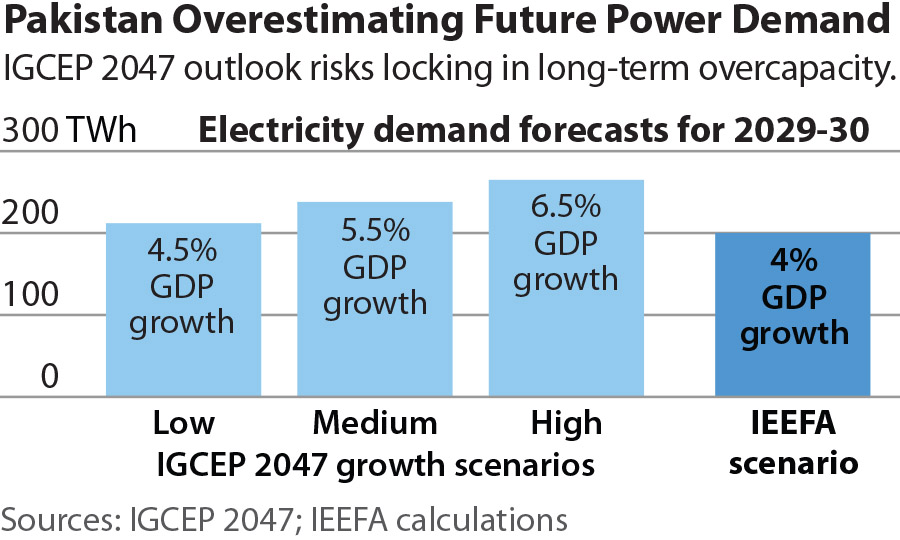 3 September 2020 (IEEFA Pakistan): Pakistan risks locking itself into building more power capacity than it needs as a result of over-optimistic energy demand growth forecasts that do not take into account the impact of COVID-19, according to a new IEEFA report. 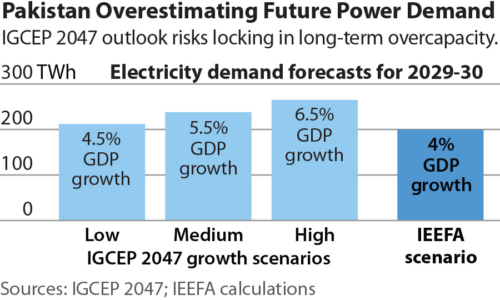 Report author Simon Nicholas, energy finance analyst at the Institute for Energy Economics and Financial Analysis (IEEFA), says the policy document fails to live up to the government’s stated principles of sustainability and affordability.

THE IGCEP FORECASTS WERE COMPLETED BEFORE THE COVID-19-INDUCED ECONOMIC DOWNTURN and do not allow for subsequently reduced GDP and power demand growth.

But IEEFA’s report also points out that the IGCEP’s power demand growth forecasts were already over-optimistic even before the pandemic – a situation that could lead to risks of locking in over-capacity in the long term.

Overbuilding of capacity and the underutilisation of imported coal and LNG power plants also risks turning these investments into stranded assets. Pakistan’s imported coal- and LNG-fired power stations will be running at just 14% and 22% utilisation respectively by 2030 according the IGCEP.

“The Pakistan government’s principle of affordability cannot be met if the power system is locked into long-term overcapacity – capacity payments to plants lying idle are already an issue and would become even more unsustainable if more overcapacity is locked in,” says Nicholas.

“The stranding of coal plants running on imported coal would also have significant implications for the Asian seaborne thermal coal market.”

Pakistan has previously been identified as one of the last few remaining growth markets for thermal coal exporters like South Africa, Indonesia and Australia, which would be needed to prop up demand as the more established, major coal importers move away from the fossil fuel.

“MODERN CLEAN ENERGY IS NEGLECTED IN THE IGCEP’S MODEL AFTER 2030,” says Nicholas. “This is despite the fact that wind and solar are already the cheapest source of new power generation in Pakistan and will be even cheaper in the 2030s and 2040s.

“In addition, the IGCEP strangely models the addition of 20,000MW of unneeded LNG-fired power capacity between 2030 and 2047 with utilisation at virtually zero by 2047. These would prove to be expensive stranded assets.”

“Due to the neglect of cheap renewables and focus on expensive coal power, the IGCEP further fails to live up to the government’s affordability principle,” says Nicholas.

“The introduction of large amounts of domestic coal power will also lead to a significant increase in the overall carbon emissions of Pakistan’s power system according to the IGCEP, not decreases.

“The IGCEP fails the government’s sustainability principle as well as one of its stated goals of reduced carbon emissions.”