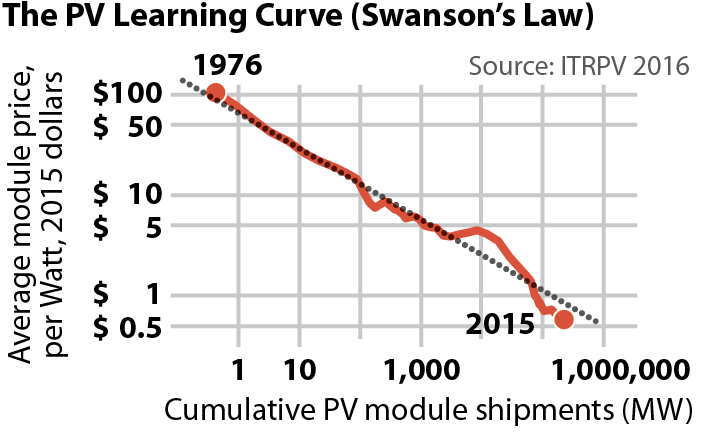 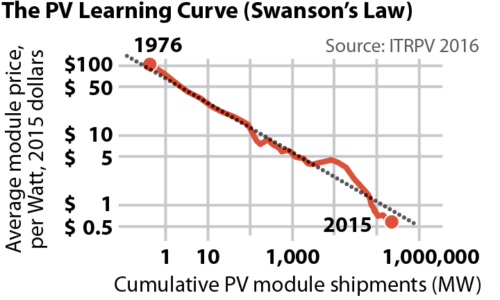 The most recent and most persuasive evidence is the collapsing cost of solar electricity—a collapse that has gone beyond anyone’s expectations, and the results are in: solar has won.

Recent events have given manifest life to Mark Carney’s landmark 2015 speech in which Carney, the governor of the Bank of England, warned of stranded-asset risks across the coal industry. This month alone has seen the cancellation of 13.7 gigawatts (GW) of proposed coal-fired power plants across India and an admission that US$9bn (8.6GW) of already operating import-coal-fired power plants are potentially no longer viable.

To put an Australian and a global seaborne thermal coal-trade perspective on it, these development strike at the very viability of the Carmichael export thermal coal proposal. They speak as well to a worldwide transition in progress.

India solar tariffs have been in freefall for months. A new 250MW solar tender in Rajasthan at the Bhadla Phase IV solar park this month was won at a record low Rs2.62/kWh,[i] 12 percent below the previous record low tariff awarded across 750MW of solar just three months ago at Rs2.97/kWh.

Lest anybody think this latest result is uncommercial or unsustainable, 40 percent of the tender was won by SBG Cleantech, a joint venture between Softbank of Japan, Foxconn of Taiwan and Bharti Enterprises of India—among  the largest, most serious and most successful companies in Asia.

Corroboration from further afield came last month in the result of a reverse auction carried out for 250 MW solar at Kadapa in Andhra Pradesh where a tariff of Rs 3.15 was quoted by Solairedirect Energy India, a subsidiary of French power giant Engie.

That Rs2.44/kWh this month was 44 percent less than the Rs4.34/kWh solar tariff awarded to Fortum of Finland in January 2016 for a project at the Bhadla Solar Park-II in Rajasthan. At the time of the Fortum tender win (itself a price that was down 25 percent year over year versus the previous record low), market analysts said the Fortum price could not be repeated.

SWANSON’S LAW FOR SOLAR CRYSTALLIZES THE COMBINED EFFECTS OF EXPANDING ECONOMIES OF SCALE AND CONTINUED TECHNOLOGY ENHANCEMENT, and is on full display now.

We see solar pricing continuing to become even more competitive over time.

Several forces are at work.

In December 2016, India released its 10-year Draft National Electricity Plan, calling for the installation of a cumulative 275GW of renewable energy capacity by 2027, as well as 97GW of other zero emissions capacity (primarily large scale hydro, but also nuclear). Relative to a planned total system capacity of 650GW, the plan sees thermal power capacity falling from 69 percent of India electricity-generation mix in March 2016 to 43 percent by 2027.

While collapsing solar prices might suggest a reduced emphasis on the buildout of hydro electricity and wind farm capacity, IEEFA views expansion of these two renewable energy resources as firmly on target. The relatively low cost of hydro at Rs1-4/kWh makes plans for accelerating long-stalled investment in this sector a clear government priority. The phenomenal success of India’s SECI holding its first 1GW reverse auction for wind in February 2017 saw a Rs3.46/kWh result, down 20 to 30 percent on previous wind auction results across India.

The politics are sound. Expanding domestic sources of new zero-emissions capacity not only builds energy security by accelerating the diversification of India’s electricity sector away from the current excessive reliance on coal power, but also underpins the economic/current account gains from ceasing thermal coal imports.

Energy efficiency is also playing a key role in this electricity transformation, with the rapid implementation of high efficiency LEDs proving an excellent opportunity to moderate electricity demand growth relative to the strong economic growth targets of 7 to 8 percent annually. Grid efficiency improvements and improved smart grid capacity to incorporate ever greater amounts of variable supply into the grid are still to be resolved or funded, but the technology advances here, too, are profound, with solutions already widely known and tested in pumped hydro storage and the rapidly diminishing cost of lithium-ion batteries.

The Reserve Bank of India has increasingly warned of rising non-performing loans and the stranded asset risks congesting the Indian banking sector as creating a major impediment to growth.

EXAMPLES OF COAL-PLANT CANCELLATIONS AND STRANDED-ASSET REALIZATIONS ARE COMING THICK AND FAST, and just this month India has seen five major announcements:

This month, the state of Gujarat has seen curtailed supply of electricity from various coal-fired power plants, including from Adani Power due to its unviable imported coal scheme. While the state government is worried about a possible supply shortage, one of the growing strengths of India’s electricity system is surplus power, and Gujarat has been able to buy into lower-cost traded supply.

IEEFA acknowledges that with investment already sunk and with the long-life nature of energy system infrastructure, coal will be used for decades to come. But we see a rate of growth now that will be nothing like previously forecast.

Transition will not be painless. As management warns that Adani Power’s 4.6GW Mundra import coal-fired power plant is no longer competitive, similar risk is being faced by Tata Power’s 4.0GW Mundra plant. These plants will curtail production rather than lose money with every unit of production.  But beyond the write-off of some US$600m of contingent profits the Supreme Court of India has ruled that Adani Power is no longer entitled to, IEEFA would point to the likely conclusion that a US$1-2 billion writedown of the the US$5bn plant is in the cards. A written-down plant can be reconfigured to be viable, particularly if cheap (US$20/t) domestic coal can be procured without exorbitant rail freight costs. This is a plan the Government of India is working toward.

It is telling that the Bhadla Phase IV solar park in Rajasthan is developed by Adani Renewable Energy, a division of Adani Enterprises Ltd, the owner of the Carmichael proposal and sister company to Adani Power, owner of the potentially stranded 4.6GW Mundra imported coal-fired power plant.

Adani Renewables has newly emerged as one of the leading solar and wind developers in India, as well as one of the largest solar module manufacturers. The Adani Group is evolving its strategy to align with the new realities, albeit with inevitable collateral damage along the way in a story similar to those that have unfolded around European power utilities like E.ON and RWE.

IEEFA Update: Signs in Bangladesh of a Budding Electricity-Sector Transition