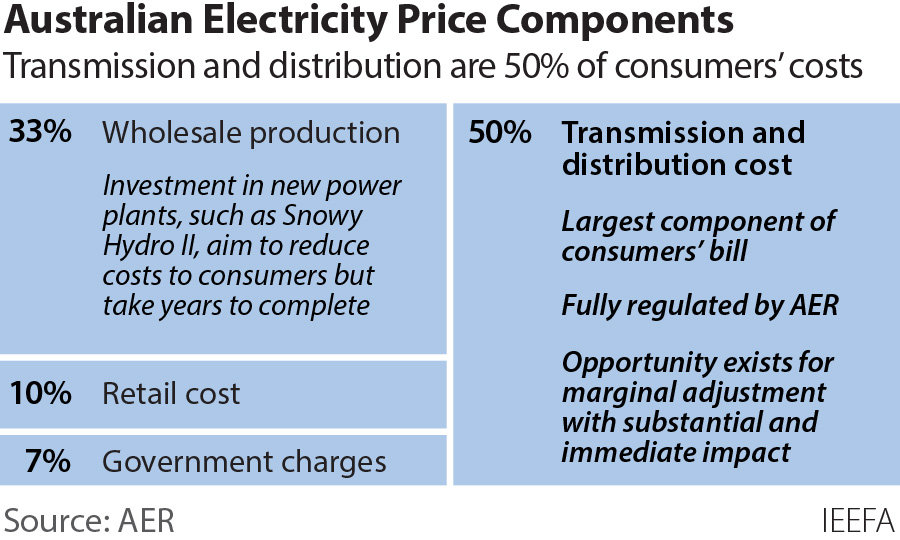 27 August 2021 (IEEFA Australia): The Federal government can better achieve its ambition to lower electricity prices if it focuses on the transmission and distribution side of the energy market rather than the generation side, as its latest plan for keeping old coal plants open will in fact increase consumers’ electricity bills, not lower them, finds a new report from the Institute for Energy Economics and Financial Analysis (IEEFA).

The government is proposing that electricity consumers pay to keep old coal plants running indefinitely, even if they’re grossly inefficient – in what’s called a capacity payment.

IEEFA has calculated that households are likely to see increases in their electricity bills of between $182 to $430 a year to keep the ageing coal plants running, more than double the carbon price.

Owen Evans, financial analyst and IEEFA guest contributor says this proposal to increase consumers’ electricity bills is anomalous with the government’s ongoing efforts for years to get prices down in the electricity market.

“The government has long been worried that electricity prices are too high, and has gone through enormous contortions at the generation end to change that,” says Evans.

“Remember Snowy Hydro had to be urgently built by 2021 to ensure supply and lower prices, but now it is optimistically targeting an opening of 2027 and ensuring supply has faded into the background.

“The narrative has been similar with the government-proposed Kurri Kurri diesel and gas power plant: if we don’t build this plant, prices will go up 30% according to the Prime Minister.

“This latest ‘coalkeeper’ strategy to keep old coal plants operating even if they’re not efficient is another waste of money, with electricity prices for consumers set to soar, not drop.

“The capacity payment is not a long term solution to lowering electricity prices for consumers, nor is funding expensive new generation in Snowy Hydro or Kurri Kurri.

Evans says the government should instead focus on influencing electricity prices through the prices charged for transmission and distribution of energy, which is regulated and controlled by government.

“The generation side has enough renewable capacity to meet any supply gap from inevitable coal plant exits for the next 10 years.

“Putting even more subsidies into the generation side of electricity will further distort markets which inevitably will cost consumers more.

“If the aim is to keep prices down, this is a hideously expensive way, and will not work.”

The government needs to look at how electricity prices were determined

Evans says the Commonwealth effectively sets the price for of transmission and distribution via the regulatory structure.

“The government therefore needs to look at how those prices were determined, and then look at the levers to see how prices can be changed.

“Transmission and distribution is the largest single cost in a consumer’s electricity bill at around 50% and it is the area where the government has the greatest power.” Evans says all recent Australian Energy Regulator determinations – which cover $58bn of assets, result in a decline in nominal pricing driven by the impact of lower interest rates and inflation on an acceptable return (WACC) and the regulated asset base (RAB). They continue however to allow for a very high equity risk premium component to the WACC which does not appear consistent with market valuations of infrastructure assets.

“The impact on prices of lower allowable returns would be greater than the claimed impact of government investment in new firming (generation) power capacity,” says Evans.

“The cost to government and consumers would be the writing of a letter to the Australian Energy Regulator to change electricity price settings, rather than investing $10bn needlessly in new generation, or keeping old coal plants running at a cost to consumers.

“If the government were to focus on transmission and distribution, which it regulates, it would see a modestly positive trend and a potentially large lever to lower electricity prices.

“Otherwise, they are just like King Canute, yelling at the blasted tides.”

Read the report: How Electricity Prices Are Determined and Why It’s Important – Marginal Changes to Regulation of Distribution Assets Are Likely More Impactful Than $10bn on New Government-Owned Power Stations